After retiring from 39 years in the TCU School of Art, Jim Woodson ’65 is tabbed by the Texas Legislature as one of the state’s official visual artists. 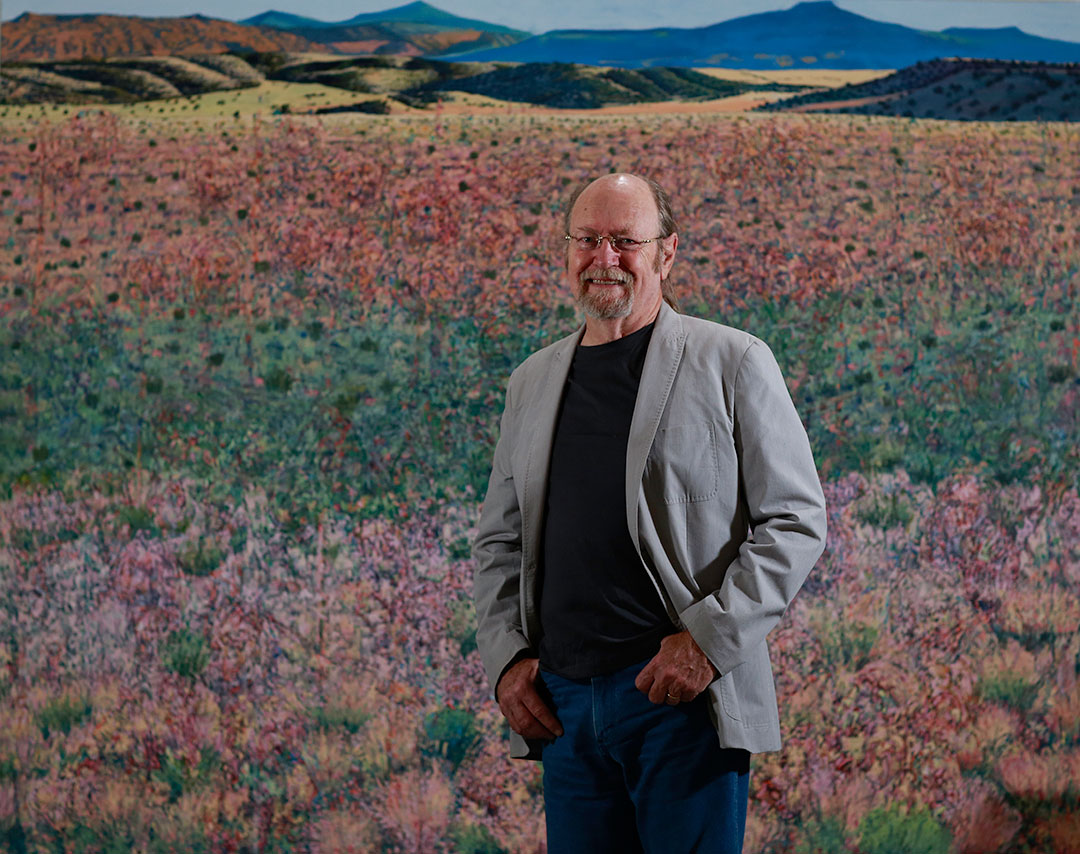 After retiring from 39 years in the TCU School of Art, Jim Woodson ’65 is tabbed by the Texas Legislature as one of the state’s official visual artists.

For as long as 71-year-old painter Jim Woodson ’65 can remember, his hands were always clutching a pencil, poised to draw something.

If he didn’t know that he was destined to become an artist, his childhood pals in his native Waco didn’t hesitate to remind him.

“My classmates kept on saying, ‘Jim draws all the time. He is bound to be an artist when he grows up,’” recalls Woodson, who retired in May after 39 years in the TCU School of Art.

His school chums were prophetic: Woodson not only has become an acclaimed painter and teacher, but, this year, the Texas Commission on the Arts announced him as the Legislature’s official state visual artist for two-dimensional work.

“I remember thinking how really nice it is just to be nominated,” Woodson says from his home away from Fort Worth, near Abiquiu, N.M. “But honestly, I didn’t think I had much of a shot because there were so many other good artists being considered.”

But Woodson did nab the statewide honor. In fact, the State Artist distinction amounts to a lifetime achievement commendation for Woodson’s decades of canvases that capture, in a transcendent way, new facets of Texas and New Mexico’s endless high desert landscape.

Woodson has shown his work in all corners of Texas, from the Modern Art Museum of Fort Worth to the compact Old Jail Art Center in Albany. Laura Bush has purchased a Woodson, while seven of his pieces are on view at the Burlington Northern Santa Fe Railway offices in Fort Worth. In September, Woodson completed a successful first show in the prestigious Wade Wilson Art gallery in Santa Fe.

Today, when asked for his take on the evolution of his prize-winning painting style, Woodson admits his earliest landscapes were spare, bereft of trees, yet full of undulating Palomino-colored hills of Northern California. Upon his return to Texas, in his early 30s, he was more influenced by those artists who were manipulating the landscape to create their work.

“In some extreme instances, I would actually build a three-dimensional form and bury it into the landscape, all to be as inventive as I could with the landscape,” says Woodson. “Pretty soon, I began imposing my own fantastical architectural or even interior shapes and spaces into the landscape in my mind and would then paint them. The landscape becomes an activity, not at all dead, but constantly in flux.”

Since 1982, Cheryl Vogel has been the chief curator of the Valley House Gallery and Sculpture Garden in Dallas, which has, since 1998, acted as Woodson’s primary DFW gallery representative and agent.

What first excited Vogel about Woodson’s artistry was his accomplished brush work and brash scale of a typical Woodson canvas. Many of his works average four-by-five feet.

“He always has such a sense of air and movement and energy in his paintings,” says Vogel. “They are never static.”

Even more appealing to Vogel is Woodson’s avowed refusal to burden the landscape with any obsessive, photographic meticulousness.

“He means his works to be paintings, though they are as far away from calendar paintings as you can get,” says Vogel. “They are muscular and masculine. His colors peer out between his final strokes, yet he is not impressionistic by nature. He wants to paint, as he says, ‘a verb not a noun.’ Meaning: He wants action in there.”

That would have been a king’s ransom to the financially strapped household Woodson called home in Waco. Woodson’s father was a broom-maker, with an 8th-grade education, and his mother a school secretary. The 6-year-old Woodson passed the days by seeking out any flat surface on which to draw, usually with the blunt graphite of a humble pencil.

“I think I was just bored with everything going in class,” says Woodson who, despite his lackadaisical affect, was still elected president of his school’s art club. “I now feel bad that I must have caused my art teacher as much grief as I did.”

A very green college student, Woodson was the first in his family to ever get more than a high school education. He was lucky enough to encounter an inspirational painting teacher named Joe Farrell Hobbs while a sophomore at Arlington State College (now University of Texas at Arlington).

“The thing about Joe,” recalls Woodson, “is that he was such a solid example of how someone could actually make a living – pay his bills, have a family — while teaching and making art. At the time, I didn’t have a clue how I could manage to do that.

“While Prof. Hobbs taught us a pretty standard painting class,” continues Woodson, “he also taught us not only about using the core material properly, but about being in the world as a vital, working, living artist.”

Upon graduating from TCU in 1965 (Woodson transferred there from Arlington State), he enrolled in the Masters of Fine Arts program at the University of Texas at Austin. Unhappy with the excessively theoretical and academic bent of the art program at UT, the freshly married Woodson was itching to leave Austin.

And with a massive sale of his accumulated art, Woodson, his wife, Linda, and their dog, piled into their car and took off for San Francisco, arriving there in 1967’s “Summer of Love.”

“Suddenly, I was an artist caught in the hippy world,” says Woodson. “It was a wonderful time. I even got to hear Janis Joplin and the Grateful Dead in Golden Gate Park.”

A series of less-than-satisfying jobs, including one at the California Historical Society and at a plastic sign factory, would eventually chase Woodson from his perceived California nirvana back to Fort Worth.

An old teacher-acquaintance from TCU, Harry Geffert, had contacted Woodson about returning to his alma mater to apply for several open painting teaching positions.

So, one plane ride later in 1974, and the 33-year old Woodson was back at TCU, assuming a one-year appointment as a visiting artist, teaching painting and drawing.

Thirty-nine years later, up until his official retirement this past spring, Woodson was still “visiting.”

“I always felt very confident as a teacher,” Woodson says. “I’ve always known I had something to offer the kids.”

Throughout his years at TCU, Woodson’s teaching philosophy evolved into one of not wanting to fill up his students’ heads with too much theory.

“Sometimes getting out of the students’ way is one of the best things you can do,” admits Woodson. “Sure, I can improve their work with color and help them with some ideas and concepts, but what I fundamentally try to convey is how seriously they must be committed to being an artist. That’s what inspirational art teachers did for me.”

It must be uplifting for Woodson when he gets that occasional invite to a splashy art show featuring one of his former students. That would seem to be the ultimate validation of a job well done in launching a viable artist into the world.

“Whenever I see evidence of one of my students’ success,” says Woodson, “I think back to what my art teachers told me: ‘If you really feel like you have a choice to be an artist, then don’t do it. Because being an artist is not about having a choice.’ You’ve got to do it. For me it was totally clear.”

Exhibit:
The works of Jim Woodson will be shown at the Moudy Art Gallery in an exhibition from September 16 to October 11.