Long ago, the TCU School of Medicine

More than a century ago, Horned Frogs studied to become doctors at the university’s own medical school. 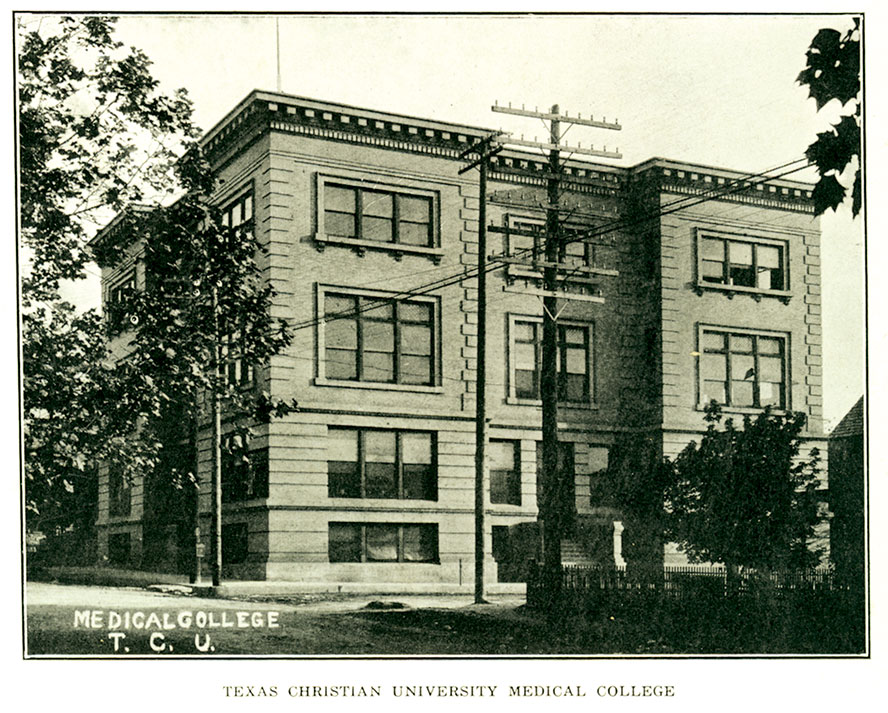 The 1914 Horned Frog shows the Texas Christian University Medical College. By 1918, it closed its doors due to a lack of funds. (Images from TCU Special Collections)

Long ago, the TCU School of Medicine

More than a century ago, Horned Frogs studied to become doctors at the university’s own medical school.

TCU’s Pre-Health Professions Institute traces its roots back 100 years, when it was first mentioned in the Horned Frog, but before that, TCU actually had a medical school.

The school was created in 1894 as the Fort Worth School of Medicine and had no affiliation with TCU, which was located in Thorp Spring at the time. Medical training in those days was largely an apprentice system, with local doctors volunteering to offer lectures and labs to students in “medical colleges.”

According to the Texas State Journal of Medicine, the medical department of Fort Worth University offered the first degrees of Doctor of Medicine in 1895.

“At that time, there were no medical schools within a radius of 350 miles, a territory of 380,000 square miles containing over 4 million people,” the Journal records.

The right to practice medicine in Texas at that time came from District Examining Boards, and the Journal reported, “Practically no medical knowledge was necessary.”

The Fort Worth School of Medicine’s initial faculty was 15 full professors, with adjuncts, assistants and demonstrators. By 1905, it had moved into a new building in downtown Fort Worth that the Journal of Medicine described as “one of the best structures of its kind possessed by any Southern Medical College.”

In 1911, Fort Worth University was joined with both the Methodist Episcopal University at Oklahoma City and TCU, which had moved to downtown Fort Worth in 1910.

In his book, The History of Texas Christian University: A College of the Cattle Frontier, Colby Hall writes: “That affiliation with TCU in 1911 was on the basis of mutual courtesy and exchange of prestige, without either department in any way assuming the financial obligations of the other or interfering with its management or control.”

But medical education was evolving and the American Medical Association began demanding that universities assume financial responsibility for affiliated medical schools. Those demands proved costly for TCU, which was operating at a deficit at the time, according to Hall’s book. Area doctors tried to raise enough funding to continue the school, but in the end it faced the same fate of hundreds of similar institutions across the country — closing its doors in 1918. Student records were turned over to Baylor Medical College in Dallas.

“One fact has become apparent through the years,” Hall writes. “TCU was wise in its policy of concentration upon the scope of work it could handle with high quality.”