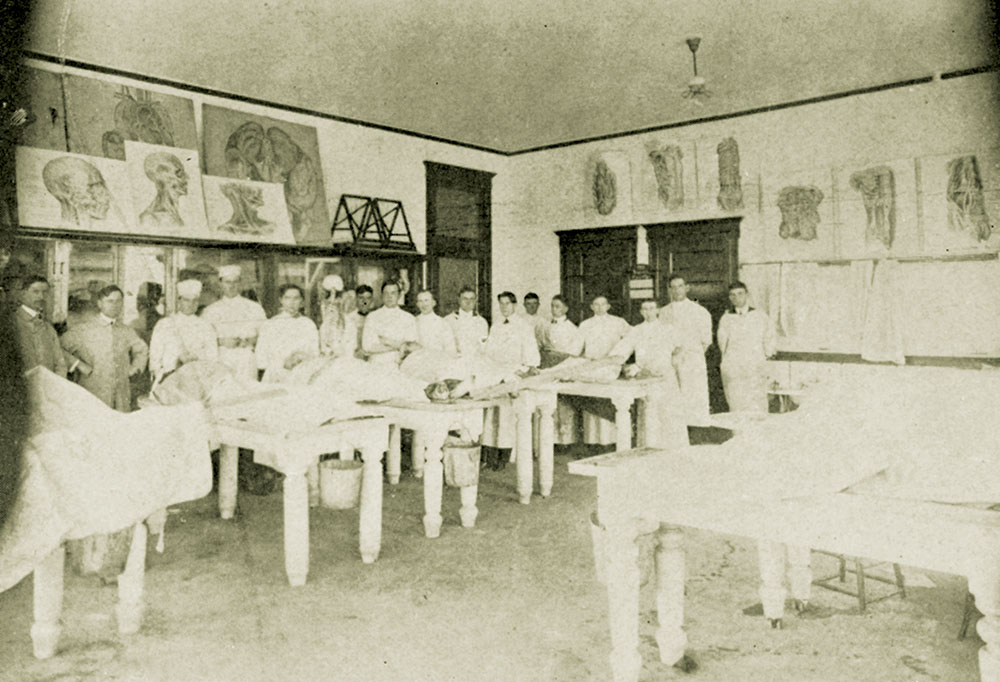 1911: TCU takes over operations of the Fort Worth School of Medicine in downtown.

1912: The American Medical Association issues new requirements forcing medical schools to have hefty endowments. By 1917, the university is warned it is not in compliance and the board of trustees closes TCU’s medical school.

1913: Story in the Horned Frog notes the beginning of a new program for pre-health majors. Biology Professor Will Winton serves as chair.

1918: Pre-health courses mentioned in the TCU course catalog.  Students had two options: 1) the AMA-recommended curriculum of two years of study that included math, biology, English, modern language, physics, chemistry and an elective. Students who completed the minimum two years of coursework could be admitted to medical school.  2) Students who took course work in addition to that recommended by the AMA that included classes in Bible, history and philosophy would simultaneously be granted their undergraduate degree by TCU when they earned their medical degree (provided the dean of the College of Arts and Sciences approved of the medical school).

1923-1924: The course catalog states: “There is an esprit de corps in the Science Departments under the general Chairmanship of Prof. Winton that brings out the best of every student.  To guide the career of a worthwhile student and secure opportunities for advanced study is one of the joys of this Department.”

The catalog also mentions the Pre-Medic club, indicating that this group “gives the students the opportunity for mutual helpfulness, and brings them many extra features as well as fellowship.”

1950: Winton steps down as chair of the pre-health program and Hewatt takes over.

1964: Hewatt reports that 361 of the program’s graduates had gone on to medical school and that 97 members of the Tarrant County Medical Society — 21 percent — are TCU grads.

1972: Chemistry Professor Manfred Reinecke takes over as chair of the pre-health program as Hewatt steps down.

1975: The TCU Pre-Med/Pre-Dent Honor Society is formed with Reinecke as its faculty advisor.

1995: Dr. Elliot Trotter, an emergency department physician at Harris Methodist Hospital in downtown Fort Worth, contacts Pre-Health Chair Phil Hartman to inquire about employing a few TCU students to work in the emergency department. It becomes the beginning of the Scribe program, which pairs students with physicians to assist with medical records, ordering of lab results and related needs.

2003: A chemistry tutorial program begins. Funded by the College of Science and Engineering Dean’s Office, four to six undergraduates are employed to assist students needing help with general chemistry and organic chemistry.

2003: The program’s office moves to the ground floor of the Sid W. Richardson Building to boost student traffic. In 2010, the offices get upgrades including a flat-screen TV, contributed by Chancellor Victor J. Boschini Jr. for “study purposes.”

2003: Denise Bennett joins the program as an administrative assistant and serves as a surrogate mother figure to many students. In 2008, she’s awarded the Wassenich Award for mentoring to the TCU community. In 2012, she loses her battle with cancer.

2010: The national AED office moves to TCU and TCU’s chapter is featured on the cover of the society’s national magazine The Scalpel.