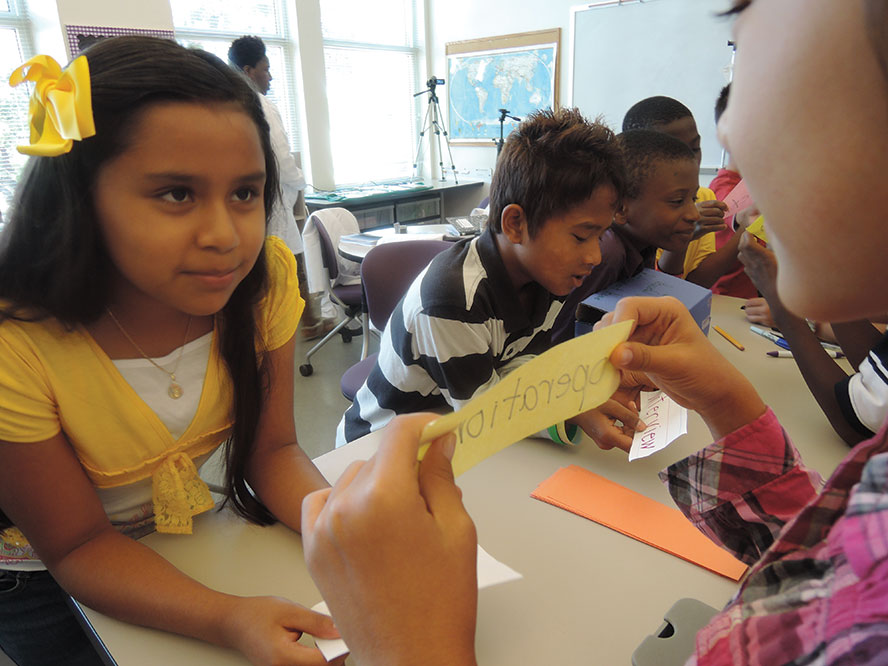 Students in the Fort Worth Independent School District’s Language Center Program came to campus this summer to hone science and language skills.

Call it the case of the missing T-shirts. The boxes of shirts that were supposed to go to students participating in the annual Math, Science and Language Summer Program at TCU were missing. Had someone stolen them?

Not to worry, 20 rising sixth-graders and 22 rising ninth-graders from Fort Worth Independent School District’s Language Center Program were on the case. Using hands-on crime scene investigation techniques including fingerprinting and DNA sampling, they found the culprit, who quickly confessed.

“She told them she was simply keeping the shirts safe and had moved them,” said Molly Weinburgh, director of the Andrews Institute of Mathematics and Science Education and William and Betty Adams Chair of Education. “They solved the problem and got to wear their shirts on the last day of class.”

Now in its seventh year, the program uses innovative approaches in teaching to build math, science and language skills in immigrant students whose native language is not English. This year’s students came from more than a dozen foreign countries including Burma, Nepal, Tanzania, Sierra Leone and Zambia and spoke 22 different languages from Arabic to Zulu.

“The whole point is to help them learn English, but we don’t penalize them if they don’t,” Weinburgh said. “If a student needs some help and turns to a fellow Arabic speaker, that’s OK.”

The program is a partnership between TCU’s Andrews Institute and Fort Worth schools aided by a grant from JPMorgan Chase. Weinburgh and Cecilia Silva, head of TCU’s Center for Urban Education, designed the curriculum.

This year was the first year the program was open to rising ninth-graders, and, to help them build on their biology skills, the curriculum focused on life science using the scenario of a crime scene investigation (the missing T-shirts). Students enjoyed a variety of hands-on activities in the 15-day program, from recording photographs and videos of the crime scene to examining blood samples, DNA and fingerprints.

“The crime scene investigation was fun and exciting for the kids,” Silva said. “They really enjoyed it and we were able to accomplish our goals to build their learning and language skills.”

Students visited the Fort Worth Museum of Science and History to tour the visiting CSI exhibit there and met with Giri Akkaraju, assistant professor of biology.

Activities also included a campus tour, a visit to the Monnig Meteorite Gallery and lunch at the Brown-Lupton University Union. The program was initially held on a Fort Worth ISD campus but was moved to TCU a few years ago thanks to the grant from JPMorgan Chase, which helps provide transportation for participants.

“We think it really enhances the program to have the students on campus,” Weinburgh said. “They get to experience the university environment and they really enjoy it.”

On the Web:
Andrews Institute – andrewsinstitute.tcu.edu