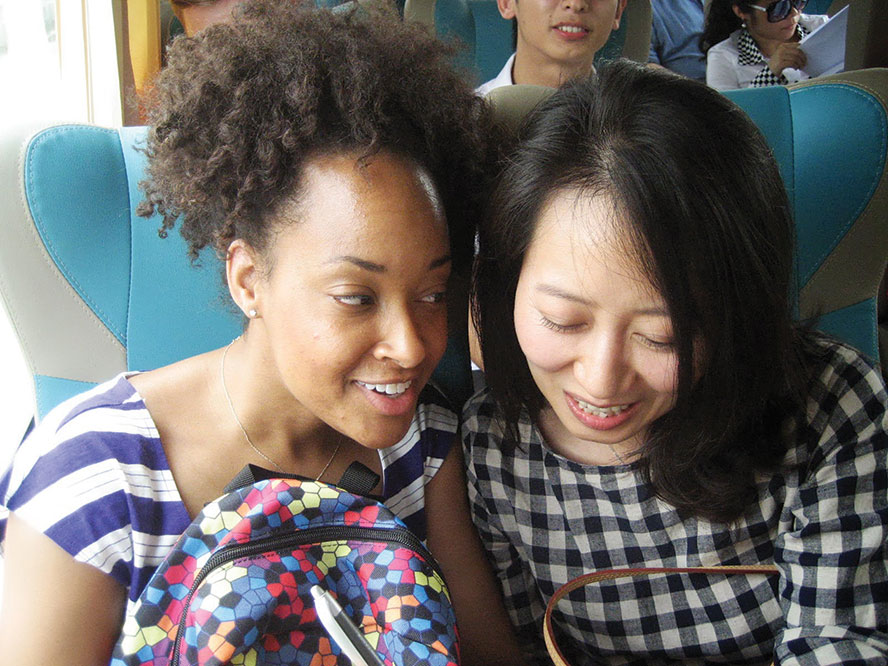 Neeley MBA student Maya Pouncy with a student from South China University (above); John Guajardo peruses the beetles in a Chinese market (below). Photos by Tai Nguyen.

TCU MBA students immersed themselves in China this summer, meeting with CEOs, founders of businesses, top managers and board members.

“We do not get canned presentations from the public relations department,” says Garry Bruton, professor of management and the Fehmi Zeko Faculty Fellow, who has led the MBA China study abroad program for several years. “We have direct discussions about what actually occurs in the firm from a senior strategic perspective.”

Bruton, who has built top business connections during his 17 years working and traveling in Asia, is honorary professor at South China University of Technology where professors Hanli Lan and Manli Huang are avid supporters of the TCU MBA visit.

“What I enjoyed most was interacting with local business people and university students along with eating all the local cuisine,” says MBA student Janelle Otero. “It was a great way to completely immerse ourselves in the culture as opposed to visiting U.S. companies in China and only spending time with other TCU students.”

Many of the firms that students visited are leaders in their market, such as the world’s largest maker of small appliances, largest plush toy maker, largest telescope maker and Guangzhou Auto Company, a state-owned enterprise.

“The trip was very fun, educational and expanded my understanding of different cultures,” says student John Fitzgerald. “My favorite class-related part of the trip was visiting the Guangzhou Auto Company and getting to tour their manufacturing facilities.”

“My favorite city we visited was Shenzhen, China’s first SEZ – or special economic zone – and one of the major financial sector hubs in China,” Fitzgerald says. “I was surprised that Shenzhen was so advanced, modern and seemingly quite capitalist.”