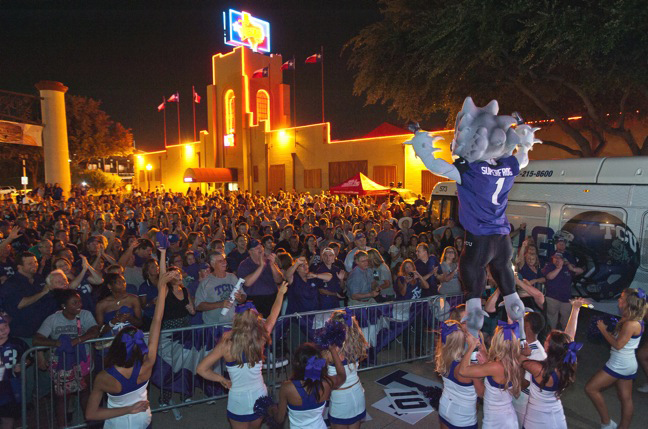 TCU Athletics estimated a crowd of 800 TCU alums and fans counted down the seconds to midnight, July 1, when the Horned Frogs became official members of the Big 12 Conference. (Photo by Glen E. Ellman)

Fort Worth is Big 12 Country now.

At midnight, TCU officially became a member of the Big 12 Conference, a move it has sought since the league was formed in 1994 and began play in 1996.

With fireworks and blasts by the Frog Horn, an estimated 800 purple-clad revelers packed into Rodeo Plaza at Billy Bob’s Texas in the Fort Worth Stockyards and counted down (from 12, no less) the final seconds to July 1, 2012, when the Horned Frogs moved to their new league.

It is TCU’s fourth conference move since the Southwest Conference disbanded in 1996, not counting the Western Athletic Conference shrinking from 16 members to eight in 1998 and the Frogs pledging but never officially joining the Big East.

“Can you get fired up about something like this?!?” TCU football coach Gary Patterson yelled while twirling his jacket on stage to the delight of the jubilant crowd.

“Fifteen years ago we started this walk,” Patterson told the crowd. “We were 1-10, didn’t have any facilities. We’ve come a long way but we don’t need to stop now. This is not the end of the journey. Our goal is still to win the Big 12 championship in all sports and win a national championship as a university.”

Even Athletics Director Chris Del Conte got caught up in the exhilaration, bounding on stage and bellowing, “How ’bout them damn Frogs?”

“It’s been a long time coming, but tonight it’s official,” he continued. “We fought our way back, we earned our way back, and today we’re in the Big 12.”

Even though the football team’s 2012 season opener is 70 days away, the 30-minute affair resembled a pep rally with SuperFrog, the TCU Showgirls and TCU cheerleaders.

New Big 12 commissioner Bob Bowlsby also greeted the Frogs, saying it was good for the conference finally to have a member in the Metroplex. “I had dinner with Coach Patterson tonight and he seems pretty intent upon keeping the run he’s had going these last few years,” he told the crowd to cheers. “It’s all good and there’s a lot of good ahead. Welcome to the league.”

Bowlsby received a custom-made, purple and brown pair of Justin boots from Patterson and Del Conte.

Fort Worth City Councilman and TCU alumnus Dennis Shingleton presented Del Conte with a city proclamation stating that July 1, 2012, was a day belonging to TCU. “This city is behind TCU, and the Big 12 is now a part of this city. TCU is going to go a long way in this conference,” he said.

The celebration continues today. The Big 12 has paid for a plane to fly a welcome banner over the campus and Fort Worth between noon and 2 p.m. SuperFrog will pose for photos at the TCU Barnes and Noble bookstore to promote new TCU-Big 12 merchandise.
On the Web:
Photo gallery from the night