Work on Worth Hills residence halls under way

Halls expected to open in August 2013 and house 400 sophomores and upperclassmen in suite-style units. Additions are first phase of planned makeover for Worth Hills. 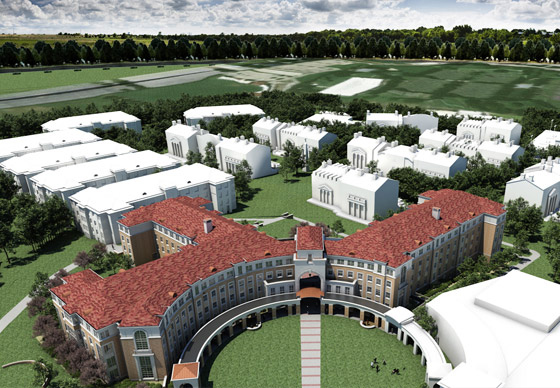 Construction on two residence halls in the Worth Hills section of campus began this summer. The halls are expected to open in August 2013.

Work on Worth Hills residence halls under way

Halls expected to open in August 2013 and house 400 sophomores and upperclassmen in suite-style units. Additions are first phase of planned makeover for Worth Hills.

After months of site work during the summer, construction of two new residence halls is beginning to emerge from the ground at the corner of Bellaire Drive North and Stadium Drive.

The halls, which are expected to open in August 2013, will accommodate 400 sophomores and upperclassmen in mostly suite-style units. The new structures represent the first of a multi-phase plan to overhaul the Worth Hills section of campus, including new housing for fraternity and sororities, plentiful green space, a dining facility and a parking garage, said Craig Allen, director of Housing & Residence Life. The TCU Board of Trustees has already approved the first phase and is considering future phases during its meeting on campus this week.

In essence, TCU hopes what the Campus Commons has done for main campus, the planned makeover will do for Worth Hills, Allen said.

“The Campus Commons created a downtown for TCU, and by most accounts, did so very successfully: Students hang out there. They eat there. Groups meet there. Events happen there. And it all used to be a parking lot,” he said. “In the same way, the center of Worth Hills currently is a parking lot. We’re going to follow the model we used for the Commons and move parking to the perimeter, so that the center can become a quad. Think of it as a TCU student neighborhood.”

The two halls already underway are separate structures and not connected, Allen said. However, an archway similar to the one at the Brown-Lupton University Union, will appear to bridge them and create a grand entry into Worth Hills.

The halls will be patterned after residence halls that flank the Campus Commons but will feature slightly different floor plans, he said. They’ll feature modern kitchens and baths, wireless access, cable television and energy-efficient systems.

“There will be a lot of single rooms but also some doubles,” he said.

A third, smaller Worth Hills residence hall with about 160 to 180 beds is also planned and would open a year later in August 2014, he said, but it is still pending approval by the Board of Trustees, which is considering it this week.

Once those projects are completed, longtime women’s residence Colby Hall would be renovated. Tentative plans call for the 350-bed dorm to close in May 2014 and reopen in August 2015.  It must remain open until the Worth Hills residence halls are built, he said.

“The Colby renovation would be similar to what we did with Milton Daniel Hall,” Allen said. “Since it is up on a mound, we’ll do something to make the entrance more open and inviting.”

But whether it remains an all-female residence is uncertain, he said.

“With the Trustees’ call for a 50-50 male-female balance, it is going to depend on enrollment numbers in coming years,” he said. “At that point, TCU may need an all-female residence hall or it may not. That will be decided closer to when Colby reopens.”

Future phases call for the construction of new housing for fraternities and sororities, a dining facility and a parking garage. It won’t have a union with a ballroom, but plans call for facilities with some meeting space that could accommodate groups of 100.

Worth Hills Pond would also be enhanced to create a campus landmark, he said.

What would it all be called? That too is undecided. Worth Hills Village and West Village are among a few monikers that likely will be considered, he said.

“My hope is Worth Hills will have similar feel as Commons,” he said. “People will walk through archway and instead of parking, there will be trees and big lawns and will feel like a neighborhood.”

Under the university’s Academy of Tomorrow vision, TCU aims to increase the percentage of students living on campus. With the planned additions, Worth Hills would increase from about 780 beds to about 1,800 and push the total campus bed count to more than 5,300, which would account for two-thirds of undergraduates.

Then what? It depends on demand. The additions largely would eliminate the current wait list, but Allen points out that as the quality of housing improves, demand increases.

“Based on the new demand we saw after the Commons was finished, I would not be surprised if we see another surge when Worth Hills is finished,” he said. “Chancellor Boschini has said that we will continue to add housing until demand is met.

“The incoming class of 2016 has 53 percent of students from out of state. The thing I hear from parents from all over the country is that they want their students to have on-campus housing. So I don’t see any reason that demand is going to slow down.”

Some residence halls for first-year students are at 103 to 110 percent capacity, according to a report given to trustees by Kathy Cavins-Tulll, vice chancellor for Student Affairs.

On the Web:
More renderings of Worth Hills Village
Video: