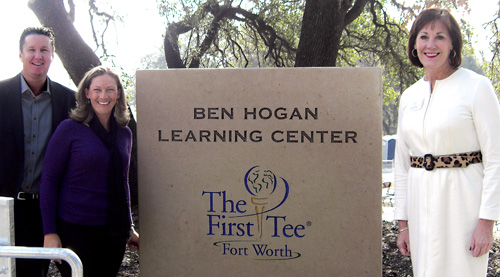 But when presented with The First Tee of Fort Worth’s plans for a first-class facility that would advance the organization’s mission of teaching life skills to children and teens through a platform of golf, the PGA Tour sensation had one question.

“We had our plans for the building, and we showed it to J.J. and he said, ‘Where do the kids hang out?’” says Janet George Herald ’74, founding board president of The First Tee of Fort Worth.

Henry’s question has been emphatically answered. The finished project, a 6,500-square-foot gem called the Ben Hogan Learning Center, opened in December at Rockwood Golf Course. Among the many amenities at the center is a space called the Henry House Hangout. Named after J.J.’s Henry House charitable foundation, it’s where First Tee participants can go to relax over Wii golf and other interactive video games.

“My time at TCU and living here while playing on tour has been so good to my family and me, and we very much enjoy giving back to the community we love,” Henry says. “Conceptualizing the Henry House Hangout in the Learning Center was a great experience. We saw a need to give these kids a place to just be kids, allow them a room to call their own and give them ownership over this facility. I look forward to seeing years and years of young people take advantage of what The First Tee has to offer and seeing the Hangout continue to be full of kids.”

The Hogan center features offices, classrooms, a library, golf equipment storage space and a club repair room. There’s also a swing room where young golfers can study their form and make adjustments. The facility is also home to a museum celebrating the history and tradition of golf in Fort Worth and Ben Hogan’s legacy.

“Our foundation focuses on tangible projects in the community, and what’s more tangible than this beautiful building and the Henry House Hangout room furnished for kids?” says Laura Moses ’07, Henry House director.

Limestone sculptures on the building’s exterior portray Ben Hogan’s famous swing sequence and correspond with nine core values that The First Tee of Fort Worth strives to instill in its participants. The organization reached more than 15,000 children and teens ages 5-18 in 2011 through life-skills classes, camps, community outreach and the National School Program in elementary school physical education classes.

And they continue to benefit The First Tee by imparting wisdom (and some golf tips) to the program’s participants, Herald says.

“Certainly J.J. and Angela not only have given their financial support, but they also give a lot of moral support and encouragement and help with the kids,” Herald says.

Growing up in the Fort Worth area and playing golf made Stanford’s decision to get involved with The First Tee and the Learning Center easy, she said. “I think The First Tee gives young people an opportunity that I didn’t have growing up,” Stanford said. “I think it’s awesome kids have a place to go to learn about golf but more importantly to learn how to be responsible young adults.”

Adds Long: “J.J.’s and Angela’s credibility have both been fantastically important. They’re tremendous role models for young people. That’s what’s really nice for me and for the program. They really believe in what we’re doing.”