Mob mentality for the cure

Now in its seventh year, Frogs For The Cure does last year’s “We Fight Back” song and video one better with a massive group dance. 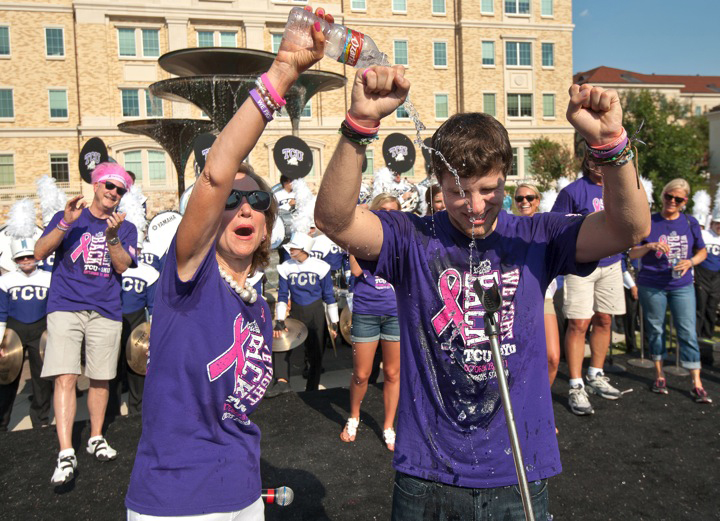 Ann Louden ’84 (MLA) douses Tim Halperin ’10 with water at the conclusion of taping a group dance video for Frogs For The Cure. (Photos by Glen E. Ellman)

Mob mentality for the cure

Now in its seventh year, Frogs For The Cure does last year’s “We Fight Back” song and video one better with a massive group dance.

Ann Louden ’84 (MLA) and Tim Halperin ’10 had earned a proverbial Gatorade bath after another successful Frogs For The Cure adventure.

A cold bottle of water would do just fine.

The pair each got doused in a moment of celebration — and relief from the triple-digit heat — after finishing the taping of a massive group dance video to raise awareness for cancer survival and research.

An estimated 1,500 people from the TCU community and around the Fort Worth-Dallas area, including 200 breast cancer survivors wearing fuzzy pink headgear, danced in the Campus Commons to Halperin’s hit song “We Fight Back,” which he and producer Brian Kieta ’95 penned for the 2010 cause.

The video will be featured at halftime of the TCU-BYU football game on Oct. 28 in Cowboys Stadium as part of the university’s annual Frogs For The Cure effort. This is the seventh season TCU has partnered with Susan G. Komen for the Cure on raising money and attention for breast cancer treatment. TCU was the first university to combine a Komen event and football game.

While the 106-degree temperature was stifling, it did little to suppress the enthusiasm of the group, which included student-athletes from men’s and women’s basketball, men’s and women’s tennis and rifle teams, plus members of ROTC, the TCU Marching Band, TCU Cheerleaders, TCU Showgirls and numerous fraternities and sororities.

“I think one of the survivors said it best, ‘This heat doesn’t compare with what the survivors have had to face,’” said Brian Youngblood, director of the TCU Marching Band, who also served as traffic cop for the video.

“It just shows you that it wasn’t just a TCU event, but a Metroplex-wide effort,” said Louden, herself an almost five-year cancer survivor and the event’s primary organizer. “The turnout we had really makes a statement about how important a cause this is, not just to the university community but to our neighbors and friends around us.”

Despite the heat, Louden was pleased with the result, acknowledging that the organizing committee considered moving the video shoot inside the cool of Daniel-Meyer Coliseum as recently as last week.

“An endeavor of this size isn’t something you can ever totally plan out,” she said. “We talked a lot about the weather and had made provisions for it with water and medical personnel on hand. Ultimately, we decided to go ahead with it outside in the Commons because we wanted the quality of the video to reflect the importance of the cause.”

The stateliness of the four residence halls and bubbling Frog Fountain surrounding the Campus Commons were too good to exclude for the project.

So Frogs For The Cure got its sweat on.

“There is a synergy between students watching from the windows of the residence halls and the enthusiasm of the people dancing,” she added.

Additionally, organizers did not want to alter the schedule after receiving commitments from celebrities, several of whom changed their weekly plans to be a part, and securing donated time from photographers, videographers and their camera equipment, including a helicopter.

Last year’s Frogs For The Cure effort included Halperin’s song and a series of short videos spliced together. This year, the organizing committee took it a step further with a massive crowd for one giant video shoot.

“This year’s effort is better than ever,” he said. “We had big dreams for this when we started, and I think that’s reflected in how many people got involved and how smoothly it went.”

Lindsay Shoulders ’06, director of the TCU spirit teams, chipped in this year by choreographing the dance, which she and Halperin taught to students, faculty and staff in a video disseminated early in the summer.

“I’m excited by how many people are here and they have it down,” said Shoulders, who admitted to being nervous before the taping. “But I know we’re going to do great and people will love it.”

But there is still more work to be done.

TCU senior Film-Television-Digital Media major Katie Norry will now edit the footage from 15 cameras from the live event, plus more than a dozen separate shoots of groups who could not participate, such as the football, volleyball and soccer teams, into a video for the halftime show. It will count as her senior thesis.

Louden is also reaching out to BYU and the Salt Lake City chapter of Susan G. Komen for the Cure to participate in the Oct. 28 halftime show.

Tonight, Halperin will perform the national anthem at the Texas Rangers-Los Angeles Angels game and SuperFrog will distribute 100 pink Komen for the Cure shirts. Capt. Brett Westbrook ’07 and his mother Mary Westbrook from Athens, Texas, a five-year breast cancer survivor, will toss out the first pitch to be caught by TCU baseball coach Jim Schlossnagle.

Cuban, Green and others were impressed with the event’s scope and organization.

For more information on Frogs for the Cure, visit frogsforthecure.tcu.edu.

On the Web:
Fort Worth Star-Telegram coverage
TCU360 coverage