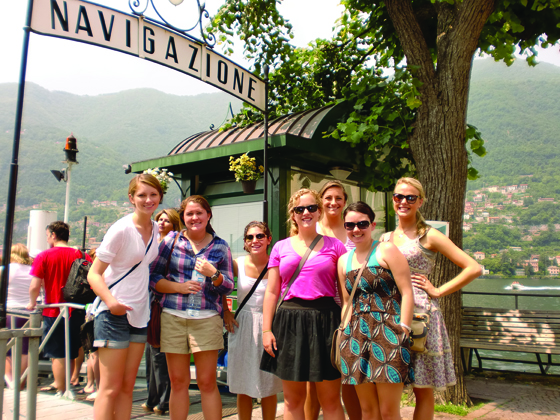 In Italy, students visited Lake Como, taking a ferry to the village of Torno.

More than a century ago, Maria Montessori developed an education method aimed at fully developing the minds of students by focusing on freedom, creativity and personal skills. This summer, eight TCU students traveled to Montessori’s native Italy and visited the Amsterdam home where she later lived and worked.

“We were actually able to stand in her office and browse through her original, authored manuscripts and books,” said Cynthia Williams, assistant professor of professional practice. “It was a special treat.”

During the three-week study abroad course, students observed Montessori classrooms and learned about the European educational system. The trip also included stops in Paris, Florence and Milan, where students visited historical and cultural landmarks and in Reggio, Italy, where they learned about the Reggio Children education philosophy.

Like Montessori, the Reggio Children approach to education lets young students guide their curriculum. It also emphasizes learning through tangible objects and experiences of touching, moving, listening, seeing and hearing.

Williams explained that the Reggio Emilia school they toured used a simple staircase to stimulate curiosity and extensive learning.

“They would use the staircase to talk about math and also ask the students to write a story about it,” she said.

“One of the things that surprised the students is how having a lot more students in the classroom actually made it easier for the students to learn.”