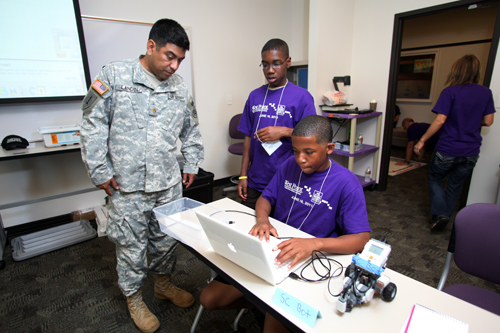 “It was challenging, but really fun,” says Chen, an eighth grader at Holy Rosary Catholic School in Arlington.

He was one of the 38 rising seventh- and eight-graders who participated in a two-day Robotics Camp in June at TCU that was sponsored by U. S. Military Academy at West Point and the College of Education’s Andrews Institute. Students participated in two challenges: one to design a truss bridge that was strong yet cost effective; the second was to construct and program a robot that would move along a specified path.

“This camp was to help students enjoy and begin to use their mathematic and science skills as they built these robots and bridges,” said Molly Weinburgh, director of the Andrews Institute of Mathematics and Science Education.

Weinburgh was contacted by West Point officials who had learned about the institute’s mission of stimulating innovative approaches to science and math education, which paired well with West Point’s efforts to increase awareness of the academy and build math and science skills in young people.

“It’s really about exposing them to math, science and engineering,” said Lt. Colonel Donald Outing, West Point math professor and director of the academy’s Center for Leadership and Diversity in Science Technology Engineering and Mathematics (STEM).

“We need more American-born mathematicians, scientists and engineers,” Outing said. “So I tell them to take all the math and science classes they can in middle and high school because that’s the foundation they need. If they can do that, it opens up more opportunities to them in college.”

Archie Wilmer III, retired lieutenant colonel and deputy director of the Center for Leadership and Diversity in STEM who lives in the Fort Worth area, said preparations for the camp began last December. When he heard about the Andrews Institute, he knew it was a natural fit. Andrews supplied the classrooms space as well as food and T-shirts for campers, while West Point provided the instructors and learning materials.

“Our hope is that a student will be inspired and say, ‘This is what I want to do with my life,’ ” Wilmer said. “Once that spark is ignited, it’s easier to direct them in the courses they should take in middle school, high school and so on.”

The camp was just one of the many special camps and workshops offering this summer at the Andrews Institute. Others include two upcoming week-long robotics camps for students, which filled quickly, and teacher workshops on how to start robotics programs in their schools.

Another workshop titled “Put On Your Math Goggles! Seeing Math in Art” targets educators in grades 2 to 4 with ways to use hands-on activities to connect math with the works of artists such as Henri Matisse and Georgia O’Keefe.

On the Web:
Andrews Institute
For more information about West Point’s Center for Leadership and Diversity in STEM, go to http://www.math.usma.edu/stem/