TCU physics students of yesteryear devoted themselves to Dr Pepper. 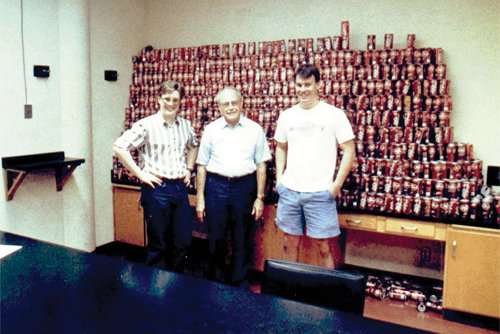 TCU physics students of yesteryear devoted themselves to Dr Pepper.

The old machine still hides mysteriously at the end of a long third-floor hallway in the labyrinth that is the Sid Richardson Building.

During the summer, faded orange lights glow on all the buttons. There’s no Dr Pepper left.

The mid-’70s era machine is the property of the physics department and maintained by the Society of Physics Students. The little money earned from it once paid for club functions, but few seem to notice it much these days, only occasionally filling it.

However, more than three decades ago, Dr Pepper had a small but fiercely loyal following on campus. The machine was actually a gift from the soda maker in the mid-1980s after the company learned of a quirky tradition among physics students.

“Many, many years ago, TCU would only allow Coke machines on campus,” writes physics professor C.A. Quarles, who has a page on his personal website devoted to the Dr Pepper machine. “In those days you would never find a Dr Pepper in a Coke machine. Due to the restrictions on access to Dr Pepper, some loyal Dr Pepper drinkers (it’s said that you have to be raised on Dr Pepper to appreciate it) were forced to go off campus to get their drink of choice.”

In protest to the dearth of DP, or “as a symbol of loyalty,” Quarles asserts, physics students began to keep the empty aluminum cans and stack them in room 324 of Sid Richardson, which was a workspace and hangout for undergraduates.

Over the years — “perhaps it was just months,” Quarles jokes — a tower of cans (and a little-known tradition) began to arise.

At the end of the semester, the graduating seniors were allowed to knock down the carefully maintained stack, and no doubt created a ruckus so deliciously fun that it was worth keeping the cans for another year.

It helped that the underclassmen physics majors were expected to rebuild the stack for the next year. Then it would continue to grow.

“As time went by, the custom was extended to graduate students when they obtained their degree and even to faculty who ‘graduated’ into retirement,” said Quarles, who was chair of the department when the tradition arose.

The last record of the ritual that Quarles remembers was in spring 1989 when Neil Koone ’89 (PhD ’96), Chris Hardage ’89 and Professor H. Miller Moseley ’43 knocked down the cans on the occasion of Koone’s and Hardage’s graduations and Moseley’s retirement after more than 30 years at TCU.

“Russ Campbell was the first can stacker, and I was the first to fill the machine and collect the money,” remembers Greg Westbrook ’83. “This was in 1980. Russ said he bought Dr Pepper simply because it was on sale at the grocery story down the block on Berry street, but we all sort of grew to love it. He told me that large quantities were bought during finals, and that they just stacked them up for no apparent reason. They had a small stack that they would knock down to blow off steam during those late-night study sessions.”

Eventually, the Dr Pepper Co. became aware of the ritual and devotion of the physics department, and contacted Quarles with a gift.

“They told me that they were so impressed that they wanted to donate a Dr Pepper machine to the department,” he remembers. “The Society of Physics Students could keep it filled up and earn the profit from the sales. We would no longer be forced to go off campus to get a Dr Pepper.

“I’m not sure if the TCU administration ever really knew about this,” Quarles writes on his site. “Of course, Dr Pepper placed no restrictions on the machine. (Isn’t that in the spirit of what started it all!)”

The tradition eventually faded in the early-1990s when the cans went mysteriously missing. Quarles doesn’t recall the circumstances but he believes an unaware graduate student took them all to a recycling center to fill up the Society’s coffers.

“That’s the way of these small traditions,” laments Quarles, who drinks Diet Coke now. “Sometimes they just fade away. But then another one will come along in its own timing.”

On the Web:
He’s a Pepper, too: A toast to Al Hoffman ’75
Prof. C.A. Quarles’s site – personal.tcu.edu/quarles/drpepper.htm

Help the magazine:
Greg Westbrook ’83 and other students say the TCU Daily Skiff wrote about the can-stacking tradition, but a search of the archive in the 1980s yielded little results. If anyone knows what issue the story ran, contact us at tcumagazine@tcu.edu, or call 817.257.5059. 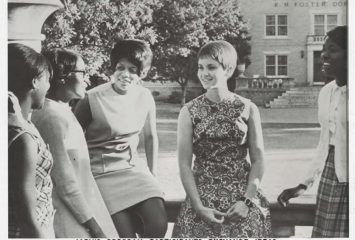