In what is now, you can still sense what was then.

In what is now, you can still sense what was then. 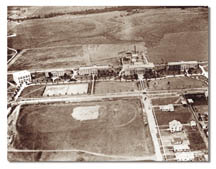 My friend, C. Ivan Alexander, who remembers the TCU campus as far back as I do, said on a rare visit back a couple of years ago, that he doesn’t recognize it anymore. He doesn’t “know” it anymore; can’t find the past that he knew here; can’t find much that relates to his youth or his student days here. In short, there is no “there” here any more.

Ivan’s family association with the University actually goes back farther than mine. His grandfather, the first C. I. Alexander, was a graduate of old Add-Ran University and a professor of mathematics at TCU from 1908-1919. His mother, Ann (Brooks), and father, the second C. I. Alexander, were graduates of TCU, as were my mother and father. Ivan was, in a word, “steeped” in purple.

Perhaps if Ivan had hung around the campus for as long as I have, he wouldn’t have such a sense of disorientation. I guess for him it’s something like seeing a person you knew as a child, years later after time has worked its changes.

For me, I watched as the child grew, so there is more of a feeling of gradual rather than sea-change. I heard Emeritus Chancellor Tucker say once that if a university is to be viable, it must change, or it becomes a dinosaur — useless, nonfunctional, dead. He was speaking, to be sure, of other than physical change, but it follows that a campus’ anatomy must also change to keep pace with its varying programs, technology, and times.

The beginnings of the present structural campus seem so modest. In January 1911, less than one year after the removal of the college from Waco to Fort Worth, the school newspaper published a preliminary sketch of the “new” TCU campus as envisioned by Fort Worth architects, Waller & Field. An accompanying article by Endowment Secretary Chalmers McPherson explained: The Skiff gives to its readers this week a picture of the “Lay-out” of the new T.C.U. This picture is, in part, a dream. The dream is one, however, which will come to pass in the future….

The reason for adopting the ground plans for so many buildings at present is that there may be perfect harmony in the arrangement. The grounds should be properly laid out and every building which is expected to be erected in the future should have its proper place assigned to it. The sketch includes nine buildings, five of which were actually built by 1914 and placed according to plan. These five included the original Administration Building (now Reed Hall), Jarvis Hall, Clark Hall and Goode Hall (both razed), and Brite College of the Bible (now the Bailey Building).

Today, almost 90 years later, there are some 45 major buildings, and more under construction, not to mention renovations, temporary quarters, recreational and athletic fields, and parking facilities. Visions in 1911 could reach just so far. Until 1942, only three major structures were added to the original five — the Little Gym (1921) since become the Ballet Building; the Mary Couts Burnett Library (1925) since undergoing two major additions (1958, 1982) which completely mask its original aspects; and the Stadium (1930) since enlarged three times (1948, 1953, 1956) and named the Amon Carter Stadium. In 1942, when I was in the second grade at Alice E. Carlson Elementary School across Cantey Street from the campus, the first building erected within my memory was begun.

Foster Hall, a dormitory for women, was within sight of my home on Rogers Road and a half-block bike-ride away. I find some irony in the fact that I roamed its incomplete shell with my biking friends 10 years before I lived there as a TCU freshman. Foster was followed by Waits, another dormitory for women, and Tom Brown, a dormitory for men, and the Fine Arts Building, since renamed Landreth Hall. Then, in 1952, the Winton-Scott Hall of Science was raised at the corner of Bowie Street and University Drive, only the second building to be built on the east campus.

The Science Building was a pet project of my father, who was then chair of the biology/geology department. He was dogged in the matter of naming the building after his respected colleagues, Will M. Winton and Gayle Scott. It remains the only academic building on the campus that honors the professors whose careers were spent teaching in the programs the facility houses.

Since then, the intervening 48 years have seen 35 more new buildings, the demolition of four older structures (Clark, Goode, Tom Brown, Pete Wright), several major renovations, and multiple improvements to and expansion of athletic facilities. All of this has contributed to the obscurity of Ivan’s “there.”

Although it is hard to get “there” when “here” gets in the way, as I walk on the present campus under the tall spreading live-oaks, pieces of the past poke out and remind me of the way it used to be. I recall those now large trees being planted as very young saplings all along University and Stadium Drives. I can hear my grandmother saying that it would be years before they grew to any height and provided any shade. And, so it was, Grandma Georgie, so it was.

My mind’s eye unsheaths the Reed Building’s facade and replaces the six Ionic columns of the “Ad” Building of my and Ivan’s time; it resurrects “The Barn,” an old wooden field house once on the west campus, and a lily pond that mirrored the columned entrance to the library. Yes, it is hard to get back there from here unless you know the territory. Were the founding Clark brothers, Dr. McPherson, and C. I. Alexander the First to come back today, they would be as unbelieving as C. I. Alexander the Third to see what has become of the little “prairie school.”

And were we to come back in 100 years, what would we find? How far can any of us see? What can we envision? Will TCU stand, expand, shrink in the face of “virtual” universities of the future? What will happen to Jarvis, Reed, and the Gym (Ballet Building) in the next century? Will they fall to the needs of future generations as did Tom Brown and Pete Wright?

Will they become vacant hulls ready for the wrecking ball because students no longer come to the physical campus but visit it in cyberspace? Will they become quaint relics of another time with guided tours of how universities used to function and how students used to live and learn? What will their “here” become?

Time alone can tell, of course, but in the meantime, we are constantly creating a new there from the here and the now.

Joan Hewatt Swaim is author of Walking TCU: A Historical Perspective. She retired in 1995 as coordinator of bibliographic control for the Mary Couts Burnett Library after 18 years of service. She now lives in Granbury, where she and her 8-year-old grandson Asher take turns smelling the “sea” on Lake Granbury.