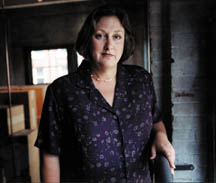 The unidentified woman stares intently at a 1960 photo of a young, smiling Jacqueline Bouvier Kennedy. Like many of the half-million visitors who come to Dallas’ Sixth Floor Museum at Dealey Plaza every year, the woman wants answers.

Outside, there is a small pale-blue x painted in the middle of Elm street. It marks where Camelot ended, and where a nation’s innocence was taken. Passersby speak in hushed tones, looking from the x to the grassy knoll to the corner window of what used to be the Texas School Book Depository.

They all seem to reach the same conclusion: Something bad happened here. And it continues to hurt us. Badly.

Back inside, the woman turns to a stranger.

“Why didn’t the media do more? They’re so aggressive today; why didn’t they find out what happened?” she asks, her eyes growing wet. “I remember Walter Cronkite crying when they announced Kennedy had been shot, but the media didn’t do anything.”

Ruth Ann McBeth Rugg ’79 could answer that question. Since January, she’s served as the director of interpretation for The Sixth Floor Museum, which now occupies the sixth floor of the building where investigators concluded that a sniper fired three shots a little after noon on Nov. 22, 1963.

“Most of the reporters were in press cars or on buses, which were pretty far back,” said the 42-year-old Rugg, a museum veteran holding Fort Worth’s Amon Carter and Kimbell museums among her credentials. “All they knew was that the motorcade picked up speed. The presidential limousine went to Parkland Hospital, but the motorcade was due at another event at the trade mart; most of the press went there.”

Of course, Rugg was only 5 years old in 1963. During the televised coverage of the funeral, Rugg remembers her mother ironing in the den — and then sitting down to cry. Today, Rugg counts hundreds of theories trying to answer who killed Kennedy.

That’s not Rugg’s job anyway. She simply tries to “make things have meaning,” she said. “My definition of meaning is making sense or significance of the information or experience that you encounter. And at The Sixth Floor Museum, you can either focus very tightly on the event of the assassination, which is meaningful to some people — or broaden to embrace some of the ideas that are part of the legacy of President Kennedy.”

The exhibit itself holds more than 400 photographs, 45 minutes of documentary films, artifacts including the Zapruder camera (which captured the assassination), the FBI model of Dealey Plaza used by the Warren Commission and even two “evidentiary” spots recreated after the event — the sniper’s nest and the stairway he may have used to escape.

On the museum’s website, visitors can view Elm Street from the alleged sniper’s exact vantage point. Yet, most of Rugg’s job is to provide the “broadening” that other visitors seek, from the events leading up to the assassination, to how the world responded afterward.

“The window of eye witnesses is closing,” Rugg explained, “so we are actively gathering oral history. We still get lots of calls from people who say, ‘My grandfather passed away, and we’re cleaning out his house and we found this box of stuff. Would you like to take a look at it?’ Sometimes, it’s nothing, but sometimes we find things of interest.”

Rugg orchestrated the Tribute to Jackie now on display, some 40 photos of the First Lady captured by the photographer she trusted most, Jacques Lowe. Patrons see not only a first lady, but a mother and a devoted wife.

Rugg — a mother herself, she and husband Jerry have three: Ben, 16; Audrey, 12; and Rebecca, 11 — also played a significant role in the restoration of the John F. Kennedy Memorial Plaza. Two blocks southeast of the museum, the 30-year-old memorial is called an “empty tomb,” four white walls open to the sky and surround a black granite marker engraved with the words John Fitzgerald Kennedy.

New York architect Philip Johnson designed the structure hoping people would discover their own meaning in the simple monument. Over time, they found more and more a place marred by broken lights, chipped paint and graffiti.

Last summer, the museum took over management of the neglected structure and rallied support from Dallas County and the City of Dallas. Supplies and expertise were donated, cracks filled, lighting replaced, the granite slab refinished.

And for Rugg’s part, she wrote and produced a 35-page historical overview of the controversy surrounding the memorial as well as added interpretative signs around the memorial. Both were firsts. The memorial was rededicated in June.

“Museums are institutions of communication,” concluded Rugg. “Now, I drive by the memorial in the morning, and people are there and reading the signs. And, for the first time, they now know what they’re looking at.”