TCU Athletics: Much to Talk About

Cool and wet weather finally came in after we had temps in the 90s last weekend. It’s about time.

How about the Frogs moving up to No. 6 in the College Football Playoff rankings? This week’s game against No. 5 OU equates to a playoff game. There’s little chance that the CFP committee will include a two-loss team.

Kick ‘Em High they did. Adam Nunez prepares for a punt during the TCU-Kansas State game earlier this season. Photo courtesy of TCU Athletics.

How about the show that the two punters put on Saturday night at Amon G. Carter Stadium? TCU’s Adam Nunez and Texas’ Michael Dixon were launching punts and flipping the field with big-time kicks. Those moves played a big part in the game as both teams played the field position game. Their hang times (time the ball is in the air) were especially impressive. Nunez did a great job into the wind, especially.

It’s about time for basketball season, too. Always a busy time of the year for us on the broadcast crew – starting Friday, we’ll do five games in eight days on the TCU Sports Network – it’s the Football-Hoops Overlap!

Friday, TCU Men’s Basketball takes the lid off with a game against the Louisiana-Monroe Warhawks at 8 p.m. On Saturday, TCU Women’s Basketball hosts Oral Roberts at 2 p.m. Both games are at Schollmaier Arena. It promises to be an exciting year for both teams. And you can’t beat the arena. Get there!

Good luck to TCU Soccer this weekend as the team heads to Tucson to take on Arizona in the first round of the NCAA Tournament on Friday night. It’s the second straight year that Coach Eric Bell’s squad has punched their ticket to the NCAA Tournament.

And a shout out!

Congrats to TCU’s Angela Stanford. She’s has been selected to the Women’s Golf Coaches Association Players Hall of Fame. Stanford will be inducted Dec. 10 in Las Vegas. 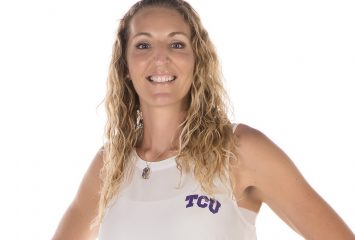