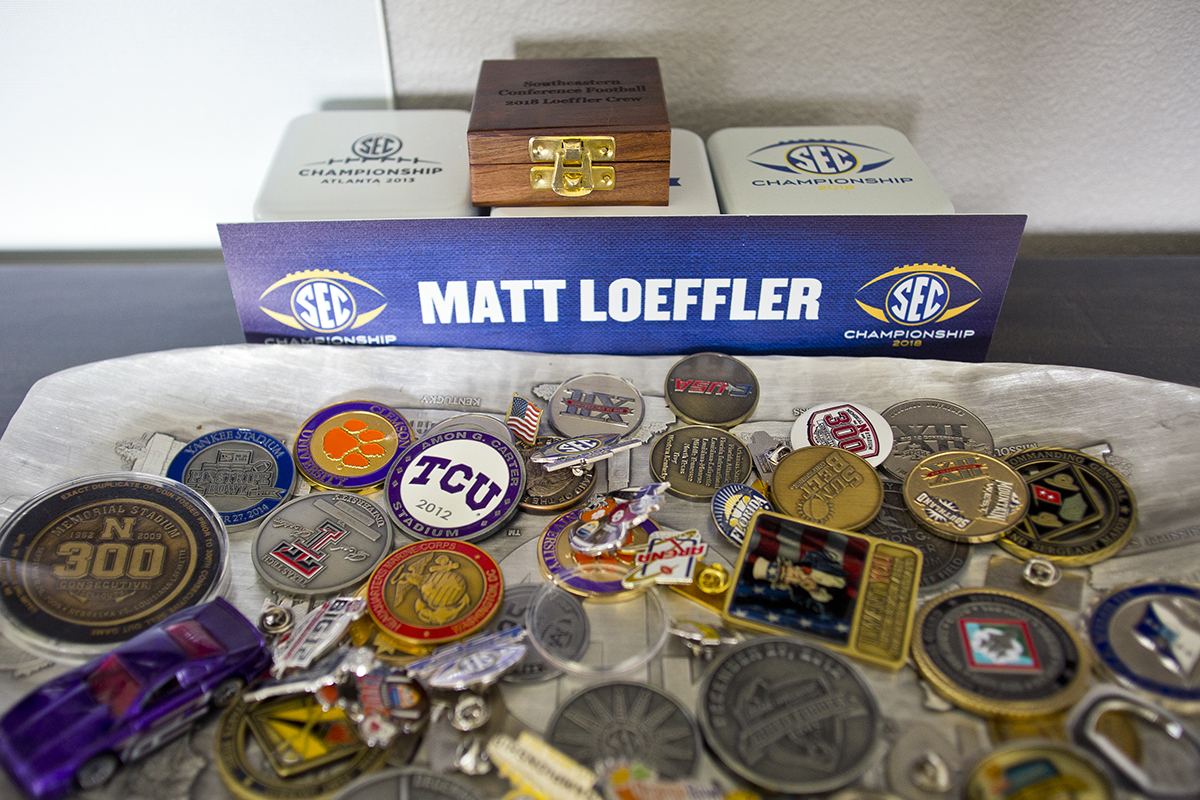 For the past 33 years, Matt Loeffler ’86 has balanced running a business and being a college football referee.

As president of his family’s glass distribution company and a referee for the NCAA Southeastern Conference, Loeffler combines skills he gained earning a marketing degree with his experience as an equipment manager for the TCU football team.

Loeffler said the efficiency of his employees at RCL Sales and the SEC crew allows him to balance his two passions. “We are a team, and we’re all going into this.” NCAA referee Matt Loeffler was named the Steve Storie Official of the Year in 2009. Photo by Mark Graham

Before enrolling at TCU, Loeffler said, he wanted a way to be involved with athletics but was deciding among a few universities. Three months before school started, Loeffler’s father died. The Dallas native said TCU gave him the option to stay local and be close to his mom.

With his father’s death, Loeffler said he knew he needed help financially, so he accepted an athletics scholarship as football equipment manager.

“I love football,” he said. “I played high school football and didn’t get an opportunity to go play college football, but I was excited to stay with the football [environment]. It’s what ultimately gravitated me towards officiating once I got out of school.”

As an equipment manager, he spent hours on the field preparing gear, setting up drills during practices, meeting officials and watching from the sidelines during the Jim Wacker days.

It was an unbelievable time, Loeffler said. “He’s the coach that really got the football team going.”

Loeffler said the skills he gained on the field carried over to his refereeing career.

“The traits that are created as a student manager are work ethic, attention to detail, responsibility and accountability,” said Brian Coutras, assistant athletics director for equipment at TCU. “It can be applied to any career, and it’s carried over to window sales and officiating.”

But the relationship Loeffler has with Coutras goes beyond the field.

“We have a double professional and personal relationship,” Coutras said. “Professionally, I can ask him officiating questions and lean on him that way.”

Selling Is in the Family

Loeffler’s decision to major in marketing emerged from a family perspective: His dad was a salesman, and his mom worked in real estate.

At the Neeley School of Business, Loeffler said, he learned how companies operate and what made them succeed or fail. “What I learned I was able to take and make decisions in my company.”

Loeffler’s first position at RCL was in sales, and he spent a lot of time on the road. As the company grew, he took the reins from his mother, who had been running the company.

Starting in 1992, Loeffler saw his day-to-day operations change as he transitioned into the owner and president of the company.

“It’s not just being a salesperson,” Loeffler said. “It’s about running the business and making decisions on future products we’re bringing in, product development and marketing.”

Reffing Through the Ranks

Early in his career, Loeffler spent weekdays at RCL, but every Saturday he was at a YMCA field refereeing peewee football games. He reffed every week, working through junior high and high school to the college ranks. The mementos of NCAA referee Matt Loeffler include commemorative footballs from when he worked the Big 12. Photo by Mark Graham

As more games were televised, the role of a referee changed.

“Managing the game is a lot different than it used to be,” he said. “We used to just call fouls and mark off penalties, but now we have to manage time: time of replay, manage the clock to get in and out of TV timeouts.

“[Television] brought the viewer into the game itself, and it makes us need to be perfect or more perfect than we ever have.”

In 2008, Loeffler began working for the Big 12 Conference. The same year, he returned to Amon G. Carter Stadium to be a referee for the Armed Forces Bowl.

“That really brought it back home,” he said. “There were a lot of hours spent on that football field, and that was a really neat environment.”

Loeffler left the Big 12 when TCU was invited to join the conference in 2012 to avoid a conflict of interest. Shortly after, he was invited to be a referee with the Southeastern Conference.

“It’s tough to be a football fan when you’re an official,” he said. “For me it’s about watching the game and enjoying college football. There’s an environment and electricity to a college football game that you just can’t get anywhere else.” Matt Loeffler, president of RCL Sales and an SEC referee, was able to commit to his family’s business and pursue his interest in football. Photo by Mark Graham

The fall is a busy season for Loeffler as he balances family and two careers.

“My family has been very understanding of my career,” he said. “They understand it’s a passion of mine, but the biggest challenge is that gut-wrenching feeling that you weren’t there at certain events because you’re gone every weekend for 12 weeks in a row.”

Loeffler credits his family and staff, on and off the field, for allowing him to do what he loves.

“When you’re on the football field and there are 100,000 people screaming and yelling, and it’s at the end of the game when tensions are high, there’s nothing greater,” he said. “The best reward of the job is being in the middle of something like that. I have the best seat in the house.”

Topics: how i got here, Neeley School of Business