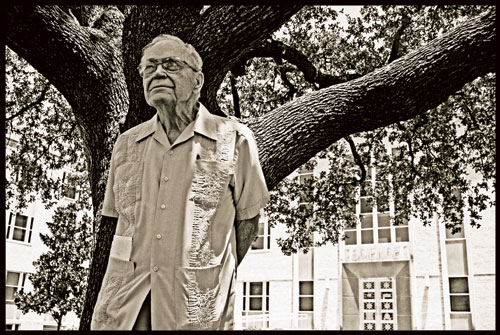 H. Miller Moseley '43 came to TCU on a full academic scholarship and graduated at the top of his class in physics and chemistry. He taught at TCU from the late 1940s to 1990.

From “Mighty Mite” to the Manhattan Project to world-class mathematician, Harrison Miller Moseley ’43, a member of TCU’s physics department for four decades, tackled challenges on and off the field. He died in September at age 92.

After his father died of typhoid fever on the family’s farm near Wichita Falls, 7-year-old Moseley and his siblings were sent to the Fort Worth Masonic Home, where he would emerge as a pint-sized football star on the famed teams in the 1930s, immortalized in Jim Dent’s Twelve Mighty Orphans.

Masonic often had players 30 to 50 pounds lighter than their foes, but it mattered not, as the team of orphans used a short passing game to beat some of the biggest and best teams in the state, including perennial powerhouses from Highland Park, Amarillo and Lubbock. A nimble end, Moseley “slashed between defenders as if his feet were strapped to roller skates,” Dent wrote in the New York Times bestseller.

But at the time, thanks to reports by an Associated Press sportswriter, who knew a good David vs. Goliath story when he saw one, the Mighty Mites, as they became known, gained a widespread following and popular Depression-era underdog.

Just 5-foot-8 and 126 pounds, Moseley was too small for an athletic scholarship and his playing days ended, but his story was only beginning.

As the valedictorian of Masonic’s Class of 1938, Moseley came to TCU on a full academic scholarship plus “laundry money.” In return he worked 15 hours a week at the university. His first job was answering the telephone for the university's switchboard.

It wasn’t long before he landed a better job — this one in the physics department where he was excelling in a freshman class taught by Newton Gaines, the much-beloved chairman of the department. Moseley eventually became a physics and chemistry major, graduating at the top of his class in 1943.

He received a fellowship to pursue graduate studies at the University of North Carolina at Chapel Hill, where he began working on a project separating isotopes for the U.S. Navy under the tutelage of Nathan Rosen, a collaborator of Albert Einstein. When Einstein asked Rosen to join his team for the Manhattan Project, Rosen took his prized pupil with him.

Eventually he enlisted in the Navy and began working in the Naval Research Laboratory, then in the midst of a huge World War II push to develop a thermal diffusion process to supply the 235-uranium isotope used for the first atomic bombs.

It wasn't until Moseley heard the news reports of Hiroshima and Nagasaki that he learned his group's research had been a pivotal part of something that had changed the course of the war and world history forever. In a 2008 interview with The TCU Magazine, he downplayed his involvement, saying, “I was just doing my job.”

After the war, Moseley finished his doctorate and returned to Fort Worth, where he landed a job teaching at TCU. Except for a year's sabbatical doing research at Oak Ridge National Laboratory in 1957-58, he would teach Horned Frogs in physics and mathematics until his retirement in 1990.

C.A. Quarles ’60, a former student of Moseley’s who was later his colleague in the physics department, called Moseley, “the most organized person I’ve ever met.”

“Whenever we adopted a new textbook, he’d work through every problem in the book," said Quarles. “He was meticulous about organizing all his labs, his lecture notes, his books – everything.”

“We were a little afraid of him,” said Richard Fleming ’72 PhD. “He was gruff, but he didn't mean to be. He didn’t suffer fools gladly, but he was absolutely the best teacher I ever saw. He'd make complex physics as easy as Mother Goose. The University of Texas and A&M were always trying to hire him away, but he wouldn’t go. He was our hero.”

He knew how to have some fun, as well. Upon retiring from TCU in 1990, Moseley was among those who knocked down a wall of Dr Pepper cans, a physics department end-of-year ritual.

In Moseley’s obituary, Dent told the Fort Worth Star-Telegram that Moseley was “one of the most remarkable people in the history of Fort Worth, Texas.”

“Without this man, some of the nation’s history might not have happened,” Dent said. “He was just deep.”

On the Web:
College of Science & Engineering tribute