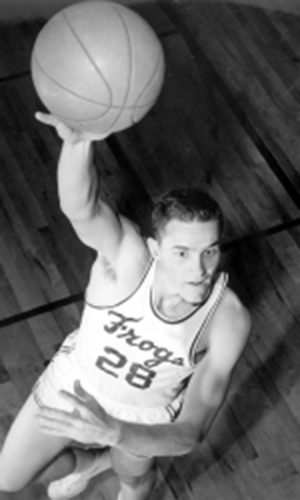 O’Neal died in September at his home in Weatherford. He was 78.

Considered by some to be TCU’s greatest basketball player ever, O’Neal was the only Horned Frog to garner All-America recognition all three seasons of his varsity eligibility. He made the Helms Foundation’s Second-Team list as a sophomore and junior and the National Association of Basketball Coaches’ Third-Team list as a senior.

“Dick O’Neal’s legend lives on to this day,” John Denton, the Frog Club’s director of major gifts and longtime color radio man, told the Fort Worth Star-Telegram. “TCU fans still talk about his accomplishments on the hardwood in the 50s like it was yesterday. That’s how big an icon he was for the program. News of his passing was a shock to me. Doc will be missed.”

Despite playing on some of the lowliest of the Horned Frog teams, he garnered All-SWC honors every season from 1954-55 to 1956-57, scoring in double figures in all 36 conference games in his career. His 49-point outburst against Rice in 1955 was a SWC record at the time and stood as the TCU standard for 41 years.

O’Neal would carry the Frogs with a career scoring average of 23.9 points a game, which remains a program record. He is also tops in career free throws made (597) and attempted (805). His scoring average of 28.2 points per game as freshman in 1954-55 led the conference and stood as the all-time mark for TCU for 40 years, until Kurt Thomas bested it with a 28.9 average in 1994-95.

He became the first men’s basketball player to have his No. 28 jersey honored in March 2010. The TCU Lettermen’s Association inducted him in 1975.

He also was drafted by the Boston Celtics in the second round of the 1957 NBA Draft.

A product of Fort Worth Polytechnic High School, he would return to his hometown, where he practiced orthodontia for decades before retiring. He served on the TCU Alumni Association board and was as an active member of the TCU Letterman’s Association Board of Directors.

He and wife Gayle had three sons and a daughter, all of whom survive him. Services are pending.