New academic building, overhauls to library and Bass Building, parking changes a part of new round of campus expansion. 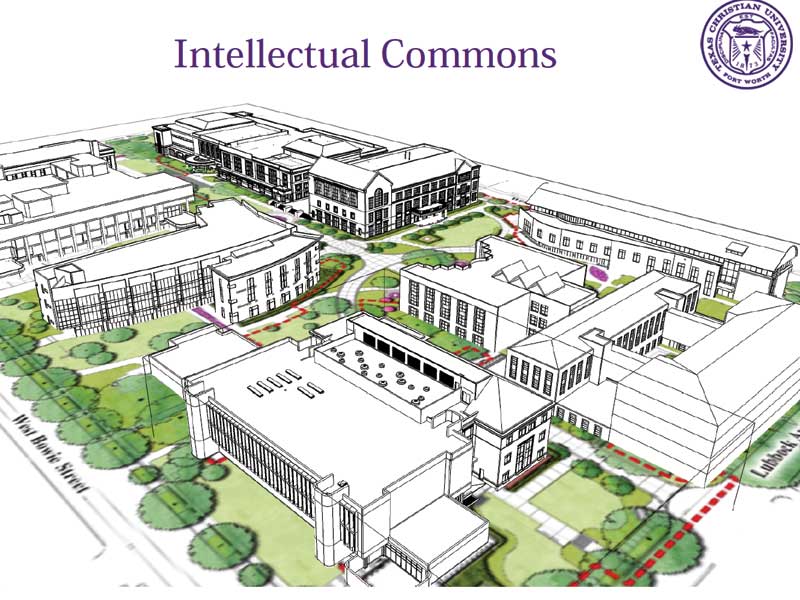 The Intellectual Commons would bring new classroom space and study spaces for students and faculty to the heart of east campus. (Image courtesy TCU)

New academic building, overhauls to library and Bass Building, parking changes a part of new round of campus expansion.

Site preparation began in mid-December for a new academic building east of the Mary Couts Burnett Library while expansion and renovation work started for the Annie Richardson Bass building.

Both projects, approved by the TCU Board of Trustees in February, are a part of the so-called Intellectual Commons, designed to foster innovation, collaboration and cross-disciplinary connections. They are key elements in the latest phase of Vision in Action (TCU’s strategic plan) called the Academy of Tomorrow, which will guide the university for the next six years.

Construction of the new structure — tentatively called Instructional Building — between the library and Smith Entrepreneurs Hall and an addition to the Bass Building are scheduled to be complete by August 2014. The renovation of the existing portion of Bass is slated to be finished in December 2014.

“We envision this Intellectual Commons to be as transformative to east campus as the Campus Commons was to the west,” said Nowell Donovan, provost and vice chancellor for Academic Affairs.

The expansion will bring much-needed space for the Harris College of Nursing & Health Sciences, which has 1,227 undergraduates.

The library will also undergo changes, moving as many as 1 million books from its 1.4 million collection to create more seating space for students, said June Koelker, dean of the Mary Couts Burnett Library.

“One of the biggest problems with the library is that it is out of book space. To make room for books, we have to make less and less seating, and that isn’t working,” Koelker said a town hall meeting in November. “With this transformation, the library is favoring seating over books.”

TCU has stored books in a high-density shelving system for nearly a decade and will move the additional volumes there before the Spring 2013 semester. Students and faculty can access the books through request, as well as a virtual system for online materials. Books that remain in the library will be organized in compact shelving.

The library will also lose the steps on its south side in December to make room for meeting rooms, research areas and offices. Construction will be complete by August 2013.

Parking in lots near the library and Bass Building will be relocated.