Allene Jones ’63 wasn’t making a statement when she enrolled at TCU, she just wanted a degree. 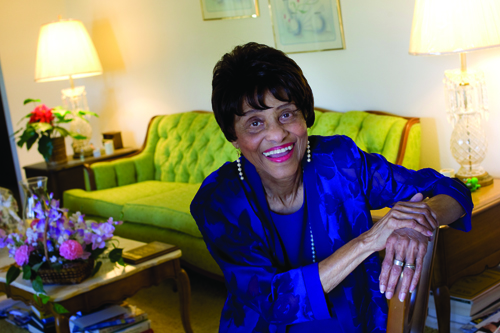 Harris College of Nursing and Health Sciences Alumni Association named its Trailblazer Award for Allene Jones ’63 in 2011. She was the first black student to graduate from the college and among the first to enroll at TCU. (Photo by Jill Johnson)

Allene Jones ’63 wasn’t making a statement when she enrolled at TCU, she just wanted a degree.

On a sticky-hot day in 1962, a young nurse named Allene Parks Jones stood in a long, winding line to register for classes.

Always an impeccable dresser, Jones had taken even greater care in her appearance that morning, selecting a simple yellow, short-sleeve dress and high heels the color of straw.

In line, a few people stole quick glances at Jones, 29, but she barely noticed. Even when a local newspaper photographer approached and asked to take her photograph, Jones said yes, and smiled politely for the camera.

That sultry September day in 1962, Allene Jones became one of the first three black undergraduate students to enroll at TCU.

Civil rights clashes were rocking the country, the South in particular. Not so far away, at the University of Mississippi, U.S. marshals escorted James Meredith, the school’s first black student, to campus amid violent riots that killed two people.

Those events, however terrifying, seemed far removed from Jones’ life in Fort Worth.

“I just wanted to go to school,” says Jones, now 78. “I was too young and naïve to understand the significance of what I was doing. It didn’t seem like a big deal.”

Six years later, Jones would return to TCU, this time as the university’s first black professor, where she specialized in clinical psychiatric nursing and was beloved by students and colleagues.

This fall, TCU’s Harris College of Nursing and Health Sciences Alumni Association recognized Jones with the inaugural Allene Jones Trailblazer Award, which will be given to others with ties to the college who break barriers.

“Allene did blaze a path for so many others, but it was never what she set out to do,” says Paulette Burns, dean of Harris College. “She just wanted an education. She wanted to teach. She not only improved her life, but the lives of others who followed in her steps.”

The white nurse’s uniform, sparkling clean and perfectly pressed, first caught Jones’ attention. She was 6 or 7 years old and accompanying her mother to the town of Taylor to visit Dr. James Dickey, the only black doctor for miles.

Two black nurses worked in the office. One of them, Marie, was especially kind and outgoing, and Jones imagined herself as a grown-up, wearing the white uniform and helping others.

Jones was born in 1933, in the middle of the Great Depression, when few opportunities existed for anyone, much less African-Americans.
The Jones family farmed cotton and corn and struggled to pay the bills like everyone else in their small, rural community near Giddings, Texas.

Once, Jones recalls her mother asking her father for money. Her father said he did not have any; he had loaned it to a neighbor in need.

“You gave away the last of our money?” she remembers her mother exclaiming.

“He needed it more than us,” her father replied calmly.

“That stuck with me,” Jones said. “My father always told me to treat others the way you want to be treated.”

At 16, Jones graduated from Giddings High School and moved to Fort Worth, where she lived with an aunt and enrolled in typing courses.

One year later, she met Albert Jones Jr. They dated for three years before marrying. In 1962, Allene Jones was among the first black students to register for classes at TCU. (Photo by TCU Yearbook)

When Jones read about a nursing course in Dallas open to black women, Albert urged her to try it. Once a week, she rode the bus to Dallas to learn how to give injections, insert catheters and administer enemas. Students practiced only on mannequins, and Jones realized the class was not accredited. Undeterred, she continued attending and learning.

Jones enrolled in John Peter Smith’s School of Vocational Nursing, one of the few places in Fort Worth that accepted black students, and in 1954 became a licensed vocational nurse.

Two years later, she heard a rumor that St. Joseph Hospital School of Nursing planned to integrate. One day, she called the director to inquire. The director told her there were no plans now or ever to integrate.

“That would be too embarrassing,” the woman said.

However, within months, the school integrated and Jones was accepted into the registered nursing program and became the school’s first black student.

Older than many of the girls in her class, Jones became a sort of mother-figure, giving classmates advice and helping them get over squeamishness.

“Some of the girls were scared to death to give injections,” she says. “By that time, this stuff was no big deal to me. I had been doing it for years.”

As graduation approached in 1959, the class planned a trip to swim in a private lake. When the owner of the lake learned that one of the students was black, he banned her from the property.

Girls were crying. Some said they refused to go if Jones could not.

“I didn’t understand why they were crying,” Jones said. “I didn’t even like to swim.”

Jones told the girls to go swim and have fun, not to worry about her. Still, many stayed home.

One of Jones’ dreams remained unfulfilled: a college degree.

While working in 1962 as a registered nurse at the United States Public Health Service Hospital in south Fort Worth, Jones learned that TCU planned to integrate. Jones applied to TCU and became one of the first three black undergraduate students at the university.

Students were kind and treated her with respect, she says. A professor once asked her how she felt being one of the first black students on campus.

“There is pressure to being the first at anything,” she remembers telling him. “If I fail, I feel like that sets the stage for future black students. I cannot fail.”

In May 1963, Jones became one of TCU’s first two black graduates. The other, Doris Ann McBride Goree, who passed away in 2009, was also a nursing student.

Psychiatric nursing appealed to Jones, and she spent three years running group therapies and learning how to interview patients at the Public Health Service Hospital, which then was a psychiatric hospital for federal prisoners with mental health or drug addiction problems.

On one occasion, she recalled standing up to a doctor who was forcing patients to undergo shock therapy without their consent.

Jones loved the work but set her sights on graduate school, an unusual goal at the time for nurses. She was accepted at the University of California Los Angeles and moved west in 1966. In 1968, Jones received her master’s degree in psychiatric nursing.

After returning home to Fort Worth, TCU offered Jones a job. In 1968, she became the university’s first black professor. The dean asked what she thought.

“Well, you have intelligent people working here,” Jones told her. “I expect to be treated like I want, and I will treat others the same way. I don’t foresee any problems.”

Jones taught clinical and psychiatric nursing, earning a reputation among students as being kind and fair.

Rhonda Keen, TCU professor of nursing, recalled her first encounter with Jones when she was an undergraduate in Jones’ introductory nursing course, a large lecture-style class.

Bored by the topic, Keen hid her paperback book behind school notes and secretly read a novel. After class, Jones walked by Keen. “That must be very interesting reading,” Jones told her, smiling.

“She never gave up on students,” Keen said. “She was an advocate for everyone and always believed in students.”

Among colleagues, Jones became known for her signature even temper, which she frequently used to defuse tension at staff meetings. Allene Jones graduated from TCU in 1963. She returned to the university as a faculty member and taught for nearly 30 years. (Photo by TCU Yearbook)

“Everyone would get hot under the collar over some issue or another,” said Linda Curry, professor of nursing. “Allene was always the calm voice of reason, a soft-spoken leader. I never once heard Allene raise her voice. She never needed to. People just listened.”

In 1998, after three decades as a professor, Jones retired from TCU, though she remains involved with the university as an emeritus professor.

On occasion, she sorts through old papers and photos from days long passed. Jones remembers herself as a young nurse, as a college student, unaware of what lay ahead, and she smiles.

She didn’t plan to be a trailblazer, she just wanted an education.

On the Web:
TCU Nursing – www.nursing.tcu.edu