Frogs went to Oxford over the summer to compare environmental attitudes from across the pond.

Frogs went to Oxford over the summer to compare environmental attitudes from across the pond.

Ever heard of the Anthropocene era? You’re living in it – the newest geologic era, marked by the impact of humans upon Earth’s climate and ecosystem.

And according to many, our impact is causing serious, long-term problems.

To that end, 16 environmental studies students spent two weeks in July at Oxford’s Environmental Change Institute, immersed in the environmental thinking of some of the brightest minds in the green movement.

Stephanie Eady, one of the graduate students involved, said learning how others approach global environmental issues was invaluable.

“It was really impressive just to hear the EU’s [European Union] perspective juxtaposed with the U.S. perspective,” she said. “Attitudes there are so different in terms of their awareness.”

Bridging the gap between Earth’s degraded state and restoring it requires a science base, but also an understanding of policy, politics and, of course, economics, Slattery said. “Grasping their interconnectedness is the key to managing the planet’s environment in any viable way long term. If our environmental science students don’t know this by the time they walk the stage, then we’ve failed them.”

While at Oxford, the students observed insect colonies favoring junkyards instead of green open fields. They talked with farmers who received grants to preserve habitat for indigenous species of birds while still working the land. They learned how London researchers create houses that use only minute amounts of energy. 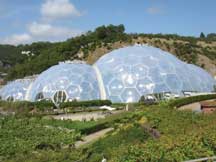 “This program lets students see the management difference, the policy difference happening elsewhere,” said Professor Tony Burgess, “and how that completely blurs the distinction between culture and natural processes.”

Eady said it’s easy to lose perspective and get beaten down in the United States when it comes to the environment. “But when you see multiple national agreements take shape in front of you, it’s uplifting,” she said, adding that she’s more hopeful now about her ability to make a difference.

“I don’t want the work I do to sit for 30 years; I want it to have an instant impact upon Earth.”

For information, go to www.ensc.tcu.edu, or contact Mike Slattery at m.slattery@tcu.edu.