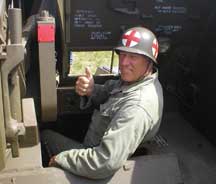 Tell an outsider that Charles Varner ’70 dresses up in authentic military garb, drives an old Jeep and re-enacts long-ago battles, and “nerd” might come to mind. You’d be way off. Varner is many things — artist, collector, lover of the human form — but no nerd. His lifelong trek through the past has taken him down some fascinating paths, recently culminating in a 60th-anniversary re-creation of the Normandy invasion.

His Dallas studio reels with moments in pop-culture history. A life-sized photo of Betty Grable’s legs frames the artist above his desk, while Humphrey Bogart’s smirk lurks in the background. Lamps surely owned by a real hippie flank the shelves. Funky clothing intersperses with elegant nudes, vintage wigs and genie bottles. The abundance might over stimulate mere mortals, but they breathe life into Varner’s work as an artist.

And the living history he re-creates with scenes from wars past breathes life into him.

“Not only do we fire blank rounds in mock battles, complete with mortar and howitzer rounds and pyrotechnics, but we set up tents and create the authentically detailed daily life of the World War II GI — wearing dog tags and even authentic GI underwear.”

Sixty-year-old underwear? These guys are dedicated.

Although re-enactment has become a passion for Varner, his artistic career did not start with an historical bent. He was studying art in the early 1970s when he met nationally renowned illustrator and TCU professor Don Punchatz.

“I would go to his class during the day and then work for him after school. I learned everything I ever needed to know about illustration from him. I was paid 75 cents an hour when I started, but by 1972 I was making $1.25 per hour.” Serious money in those days.

At 22, Varner started his own business, ultimately designing ads for companies such as Southwest Airlines, Exxon, IBM and Dr Pepper. While computers have revolutionized the commercial art world, Varner remains one of the “real” artists — creating his designs from ink and paper.

“I have been blessed with the gift of art and will never tire of drawing and painting,” he says. “Many people my age are retiring. What would I do if I retired? I would draw and paint.”

Fortunately for him, Varner’s art career leaves plenty of time for pursuing history. As president of the Military Vehicle Preservation Association, he helps add authenticity to re-enactments throughout the world. The reenactors immerse themselves in every detail of the times, from listening to Big Band swing and bebop to incorporating the “swell” slang of the 1940s in their conversations. Even transporting World War II-era vehicles across the Atlantic is a challenge Varner embraces.

“It was the 50th anniversary of D-Day and I couldn’t afford the cost of shipping a container with my Jeep,” he remembers. “It would cost about $2 a pound to ship the Jeep each way, so it would have run over $5,000 round trip.” 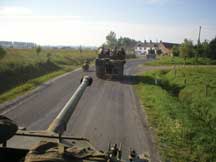 Instead of giving up, Varner grabbed the phone and offered American Airlines an opportunity the company could not refuse. Although the first few people he spoke with laughed at the idea, Varner kept calling until he found an executive who saw the vision. A few days later, Varner and his wife were enjoying complimentary seats on a flight to Heathrow, with their Jeep traveling in the plane’s belly.

“That trip certainly set the course for the next 10 years of traveling to Europe and driving military vehicles,” he says. “Now that I think about it, that is one of those few times in life when one incident changed my life and led me in a new direction.”

Dozens of vintage vehicles made it across the pond for this year’s anniversary.

“Sixty years later the streets of Portsmouth, England, once again echoed with the sounds of low compression engines and whining gearboxes of WWII trucks,” Varner writes in his recap for the MVPA newsletter. “The distinctive sounds of jeeps, Dodges, GMCs, and various British vehicles were heard heading for the hards once again.”

While becoming accustomed to warm beer and chow at the field kitchen, Varner enjoyed the comedic spice added by some of the reenactors.

“I had one ATS girl in uniform (Auxiliary Territorial Service girls, similar to the U.S. Women’s Auxiliary Corps) come up to me and say, ‘You know what they say about us ATS girls and our knickers? One Yank and they’re down!’ “

“We could see the control tower in the mists in the distance. As we cautiously approached the tower, a car suddenly headed toward us at a furious pace.” 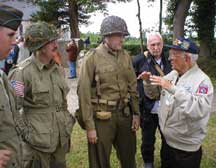 Expecting an irate farmer, the group was surprised to be greeted heartily by the historian for veterans of the 487th Bomb Group. The veterans were gathered inside the control tower celebrating their 50th reunion.

“They thought they were seeing ghosts. As they looked out into the mists they saw the World War II Dodge approaching filled with American GIs! They couldn’t believe their eyes.”

The veterans gave Varner’s gang a world-class tour, followed by a night of story-telling in the local pub.

“So often no one wants to hear their stories anymore,” Varner says of veterans both in the U.S. and abroad. “These are the real stories of real people, something that you cannot ever find in a book. We have attempted to record these memories, because soon this generation will be gone and with them their accounts of what happened to the regular dog-faced soldier in World War II.”

“Since you are going at such slow speeds it is a great way to take in all the sights and, of course, the smells. True, the gas mileage is pretty bad, (but) you can park virtually anywhere you want.”

When Varner and his buddies decided to visit a popular cathedral, they simply rolled up to the front and parked.

“A bus load of 29th Division veterans arrived and thought we had parked the GMC there for them,” he says. “And actually, we did. The reason we make these trips is to remember those who were there in 1944.”

Varner’s work with the MVPA has taken him on a few unexpected adventures in the U.S. as well. From an appearance with the Fort Worth Symphony to a series of performances with the Ballet Arlington, his fleet of military vehicles has seen the limelight. For the ballet performances, Paul Mejia choreographed the ballerinas around a stage filled with Jeeps and Harley-Davidsons.

“At the final curtain, red, white and blue balloons fell from the ceiling as we all danced with the ballet company. It was a moment to remember,” Varner says. “And I can now truthfully add to my résumé that I have danced on stage with a professional ballet company! Cool.”

Such experiences shape Varner’s philosophy of life. Viewing his varied career through the mingled lenses of history and art keeps him optimistic.

“Whenever I feel overwhelmed and think the world is going to hell, I put it in the perspective of the Greatest Generation, who lived through the Depression and World War II.”

Learn more about the Military Vehicle Preservation Association at http://www.mvpa.org.