Topics: College of Fine Arts, how i got here

A doctor first pointed Tina Mullone ’04 MFA to the dance studio when she was 7. “I started off in ballet, but it was really due to a medical condition,” Mullone said. “I dragged my left foot and I was pigeon-toed. The doctor said, ‘Put her in ballet. That will correct it.’ ”

The doctor was right. Dance not only corrected Mullone’s feet, but it also blossomed into a rewarding career. After earning a master’s degree in modern dance, Mullone is associate professor of dance at the University of Louisiana at Monroe and co-director of M2, a performance art collective she co-founded with a colleague in 2014.

Not one to forget her Fort Worth roots, Mullone serves as an associate artistic director with Contemporary Dance/Fort Worth and a performer with Beckles Dancing Company in Dallas — her ties to both go back close to 20 years. She also is a dance specialist for Louisiana A+ Schools, which trains teachers how to integrate the arts into their curriculums.

Mullone’s contemporary African diasporic modern dance style, fused with classical ballet, reflects her training. She has a beginner level M’Singha Wuti certification in the Umfundalai contemporary African dance technique and is working toward a professional certification. On a national level, she serves on the Arts Advocacy Committee of the National Dance Education Organization and is a South Board Member of the American College Dance Association.

“What I love most about dance is it is an alternative expression for those who feel uncomfortable speaking, but I also feel it’s a great therapy,” she said. “I think dance is open to everyone who wants to receive it. There’s just something about it that you can share with someone — share that energy with someone else.”

Mullone began her training in ballet at a Fort Worth studio under Fernando Schaffenburg, former chair of the dance department at TCU and an early artistic director of the Fort Worth Ballet Association.

“He instilled in me a discipline that if you really are true and passionate about your craft, then you are going to do your best and beyond every day and also continue to educate yourself,” she said. “He also taught me there is no such thing as a brick wall. It’s only in your mind. If someone says no to your pathway or blocks your pathway, you find another way to get around that.”

In middle school, Mullone enrolled in modern dance classes. By her senior year of high school, she knew modern dance was her passion when she saw a performance by Dallas Black Dance Theatre. “I said, ‘Oh my goodness. That is something I would love to do.’ ” Tina Mullone ’04 MFA performs in a duet with percussionist Mel Mobley entitled Love and Violence in America 2014. Mullone and Mobley collaborate as M², a performance art duo which they co-founded in 2014. Courtesy of Tina Mullone | Photo by Milton Adams

Mullone, who lives in Louisiana, commutes to Fort Worth and Dallas. About once a month, she meets with the choreographer at Beckles Dancing Company, with which she has performed since 1999. Formerly known as Nova Dancing Company, the contemporary modern dance group works with middle and high school students. She also teaches students from time to time in the Fort Worth Independent School District through Contemporary Dance/Fort Worth, which she has worked with since 1998.

“Some people say, ‘Be with one company for five years and then move on to the next thing.’ But I feel that when you work with people who are good people at heart, who are wonderful artists to work with and you share their passions — you know you trust them enough that you’re going to follow whatever choreography they give you — there’s something beautiful about that.”

Mullone said the dance companies inspire her to grow. “I continue to learn from them. They’re not static. They’re always learning, always looking for something new. And isn’t that what art is about? It reflects people. We as a people can change.”

“At this moment in time, we are a minor dance program, but we are trying to establish a degree. Of course, there are challenges. You have to always defend the arts, but dance has it a little bit harder,” she said. “Dance is considered to be on the low end of the arts. It tends to be the last funded and the first to be cut. Other than ballet, dance is seen more as a pop art by a large number people.”

But she enjoys working with college students. “They’re at a point where they’re trying to decide what to do with their lives. I think any exposure to the arts helps the arts survive.”

A few years ago, Mullone and colleague Mel Mobley, head of the state university’s music theory/composition division, collaborated on a project: Mobley’s music students performed, and Mullone’s students choreographed and danced to the composition.

“We did a performance in Houston, and I said, ‘Why don’t we form a company called M2?’ It’s really our names put together — Mobley and Mullone — or you can look at it as music and movement,” Mullone said.

The ensemble examines the progressive nature of modern art through music, movement and video. “We realize that there’s a resistance to modern art and new music,” Mullone said. “We are always thinking about that on the cusp of our creativity, and we really think about adding a multimedia effect. So we have some multimedia aspects about our work.”

Mullone accompanied Mobley to Cuba in 2015 for music research and fell in love with the people and culture. She’d like to return to Cuba for intensive dance study, and would like to visit Africa and other places in the world to study dance and culture.

Dancing into the future

In 2015, Mullone added Pilates certification to her repertoire of movement skills. She serves as a substitute instructor for Pilates Works in Fort Worth, but she said she wants to teach Pilates in the physical rehabilitation field to adults 50 and older. “I really like teaching Pilates. I would like to work more with that generation and in the sports area as well,” she said. Tina Mullone ’04 MFA is associate professor of dance at the University of Louisiana at Monroe. Courtesy of Tina Mullone | Photo by Milton Adams.

A cultural study in Bahia, Brazil caught her attention. Mullone will be joining the Viver Brazil Dance Company, a not-for-profit organization, for “Dancing at the Source.” For two weeks, she will be taking classes; visiting cultural sites; exploring environmental attractions and engaging with local artists, educators and thinkers.

She also wants to continue to be an advocate for the arts “because the arts connect us on cognitive, expressive and social levels.”

And, of course, she will continue to dance. “I’m amazed that I’m still performing at this age and still choreographing,” said Mullone, who is 46. “That’s something I want to continue.

“Living in the South, there is not a lot of support to continue dancing after a certain age [25 or 30]. Dancing is who I am. It helps me create, be proactive, keeps me spiritually centered and contributes to society in a positive way,” Mullone said. “Most importantly, it makes me happy.” 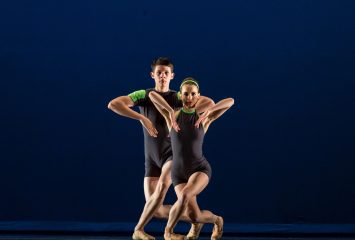 Dance students showcased a range of styles at the Fall Concert at Ed Landreth Auditorium in November.