“I’ve had some terrible work experiences, that in the moment felt like the world was ending,” Dasher said. “But the world was not ending. In life, everything sort of adds up over time. All those experiences shape who we are.”

Dasher’s big break happened in 2006 when she applied for an entry-level stitcher position with Cirque Du Soleil in Las Vegas. She was invited to interview for the higher job of draper. When she was called back for a practical interview, she realized neither her BFA in theatre-costume design from TCU nor her MFA in costume design from the University of Arizona included patternmaking skills specific to spandex. She researched the specifics online, and her efforts paid off. She landed the higher position.

“I was stunned because I had just Googled how to do the job 36 hours prior,” she said. “It was the biggest moment of my career because I was being put into a position to solve problems for them.”

In the position, Dasher was tasked with going back to costumes from early Cirque shows to see if new skills and technology could make costumes last longer or reduce the cost of producing them.

She also had to account for her time. “They reproduced thousands and thousands of costumes a year and wanted to know how long it would take to make a costume.” Using a stopwatch, Dasher timed herself laying out a pattern on the fabric, cutting it and passing it off to the stitcher.

“That improved my productivity,” Dasher said, noting that her college work centered on cultivating creative skills without getting bogged down by budget or manpower constraints. “It shifted my focus more onto business. It was really an important juncture in my career, but at the time, I was just thrilled to be in the room.”

“Experience is everything. I’ve had some terrible work experiences. …In life, everything sort of adds up over time. All those experiences shape who we are.”
Jennifer Dasher

That career high was followed by a career low. While working at Cirque, a friend recommended Dasher for the vacant head of wardrobe position for the Spamalot production at Wynn Casino in Las Vegas. “That was the worst job I’ve ever had,” said Dasher, who was charged with assessing the team and dismissing people who weren’t a good fit. “It’s a terrible thing to fire somebody whether they are good at their job or not.”

One of the department’s functions was to help actors change costumes. Three wardrobe people might have 30 seconds to change six actors — “which was increasingly difficult when someone didn’t show up in the room at the right moment,” Dasher said. “You could have performers going on stage not fully dressed, and people in the audience have paid hundreds of dollars [to see] the production.

“It’s not like we were looking for reasons to replace people who didn’t need replacing. These were people who weren’t doing their job. But at 27 years old, you just have a different consciousness of the reality of somebody losing their job and not knowing how they would pay their bills.”

The show was fun, but the job was not. Dasher moved on within six months.

Dasher headed to New York, where she worked for a custom costume-maker and an opera house before landing a job as costume workroom manager at Papermill Playhouse.

“Every time you work on a show, you collaborate with different people and work on different types of costumes so it expands your practical skills and also exposes you do different ways of communicating with people,” she said.

A highlight was building friendships with the stitchers, many of whom were immigrants. Some would circle words they didn’t understand in newspapers and ask Dasher to explain them. “Every day was just a joy to go in and work with these women who had such different backgrounds and may have had difficulty with their English but didn’t have difficulty with their skills,” she said. “They were skilled beyond anything I have experienced since or prior to that.”

As the Great Recession started taking its toll, fear set in and Dasher wasn’t sure she had enough experience to ride it out in New York City. She turned to teaching, which was her long-term goal. She served as costume designer and shop manager at North Carolina State University in Raleigh, but soon realized it was too early in her career to teach.

“I didn’t feel like I really had enough knowledge or life experiences to serve the students the way I wanted or the way that I felt I was served when I was a student,” Dasher said. “Sadly, I took another university job just to confirm.”

While she was costume shop manager at the Clarice Smith Performing Arts Center at the University of Maryland, Dasher also worked as a contractor for the Washington Ballet. One of her roles was to have costumes made because the ballet didn’t have an in-house shop. To create 90 or some costumes at a time, she hired independent shops and costume makers from Boston, Washington, D.C., and New York.

“I realized this is a crazy amount of work just to coordinate the bits and pieces — forget what the bits and pieces look like — and for us to sort all the fabric and trim and figure out who’s going to make it, how much it’s going to cost and if we have the money for that.” Add in shipping the raw materials and arranging fittings, and it stacked up to a crazy amount of paperwork, she said.

In an aha moment, Dasher realized other theater, ballet and opera companies were doing the same thing. “I started to see that maybe I could open a shop and serve some of these companies, and they could come to me for a large chunk of their costumes. So instead of eight out of 90 being built here and two here and 16 here, maybe we could build 30 costumes and eventually all 90.”

“Where you think you’re going may not be where you’re going. Even if you find yourself somewhere different, you in no way, shape or form failed.”
Jennifer Dasher

At this point, most of Dasher’s professional ties were to the East Coast, and most of her family lives in the region as well. But she had no interest in living in a crowded city. “Going to a grocery store in a large East Coast city is the definition of my nightmare,” she said.

A friend suggested Dasher try Lancaster, Pa. — quiet Amish country where his company does brisk business creating stage sets for rock concerts. “They do it out of the middle of nowhere in Pennsylvania,” she said. “I had mentally made the decision, so I just picked up and moved out here. I had a few small contracts at that point, and I just slowly built it into more contracts. I made local contacts with these companies that work with rock concerts.”

Founded in 2013, J. Dasher Costumes is often called upon to help with technical rehearsals for music superstars to iron out any last-minute costume kinks before a show hits the road.

“The performers will do a month of rehearsals, but a lot of what we do is when it’s coming down to the wire,” she said. “It’s 12- to 14-hour days of just grinding out the list of things we need to get done as quickly as humanly possible.”

The technical rehearsals for Swift were held at the Rock Lititz live-event rehearsal facility in rural Pennsylvania, Dasher said. “She came out with a slew of costumes and a slew of dancers to rehearse, and at different times in the process different things changed.”

Pre-tour fixes can be as simple as switching dancers’ tuxedo shirt buttons to snaps for quicker wardrobe changes or as complex as remaking custom costumes for an entire dance ensemble because the color isn’t quite right. “So there are small changes that we’ll go in to help facilitate the workload and then there are larger things.”

Dasher remembered Swift chatting and passing out candied bacon her mom had made. “It was good,” she said. “I think that’s the real difference with wardrobe. Not that Taylor has nothing to do with her set or doesn’t interact with stage and lighting technicians, but when you’re in somebody’s dressing room, it’s just a different level of interaction.”

Since the fall, J. Dasher has been involved with costume design for Abdul’s North American tour, which begins in May. “She’s a lovely person and everybody that’s going to be involved in that project is really excited to continue working with her,” Dasher said. 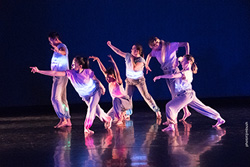 Specializing in performance couture for the entertainment industry, the creative studio is earning a reputation for niche projects — such as LED-lit costumes for Broadway’s Honeymoon in Vegas — as well as costume design and technical rehearsals for big-name performers, including Taylor Swift and Paula Abdul. Dasher also recently launched a line of commercial dancewear called Desire Dance Wear.
Photo ©Jim Bush

Another spot for the future of J. Dasher Costumes is a niche in the challenging LED market, where the technology is trying to catch up with what designers want. In 2014, Dasher and her team created LED Elvis costumes for the Broadway version of Honeymoon in Vegas. “We learned a lot and ultimately we were successful, but it’s been a long process to get to being successful.”

Dasher enjoyed working on the cutting edge of technology and served as the 2016-17 University at Buffalo Morris Foundation Visiting Artist, working with computer science and theater students to integrate LED technology into live performance, such as through dance costumes.

Drawing from her Cirque days, Dasher launched her own line of commercial dancewear called Desire Dance Wear. “I like the specialty projects in terms of LEDs. There will be something else that comes up in technology, and there are already different things going on in projections in costumes,” she said. “We will continue to take our theater work, of course, but we are really pushing in the dance and technology direction.” Do you need a career makeover?

When was the last time you kicked the tires on your career?