Sit Down and Stay Awhile

Chairs across campus create a welcoming environment and add flair to decor.

From leg shape and lines to an array of upholstery options, the humble chair offers more design sizzle than almost any other item of decor. Knowing the visual impact seating can make, TCU’s in-house interior designers strive to balance function with eye-catching form.

“I like to identify iconic pieces that are important to a space and then make sure I have enough money in my budget to splurge on them,” said Stephanie McPeak ’03.
And, as Lisa Murrell Aven ’79 puts it: “A great chair can elevate any room.” A table and chair set called Lo by Keilhauer in the King Family Commons, chosen for the space by TCU in-house interior designer Lisa Aven ’79. Photo by Carolyn Cruz

1. Lo by Keilhauer
This cross between a cushion and a pillow-topped stool became a favorite among sorority and fraternity members who perch on them during house meetings on the King Family Commons’ second floor. The manufacturer touts the hip-elevating design as able to restore “gravitational equilibrium and spinal curves.” 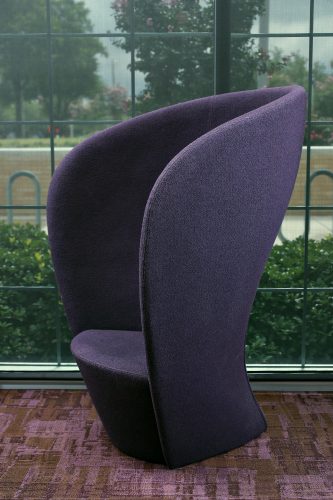 The Shelter chair by Busk + Hertzog in the King Family Commons. Photo by Carolyn Cruz

2. Shelter by Busk + Hertzog
Aven knew the moment she laid eyes on the exaggerated wingback chair designed by Danish modernists Busk + Hertzog that she would find a way to incorporate at least a few of them in the King Family Commons. Stretching 52.5 inches tall, the chair envelopes anyone seated there, creating an ideal environment for answering email or video-chatting with friends. 3. Cuff & Collar by Campbell Contract
On the first floor of Rees-Jones Hall, a quartet of swiveling club chairs sits in a tight grouping at the heart of the TCU Energy Institute. “Seriously, these white leather and wood chairs are the most comfortable chairs I’ve ever sat in,” said Victoria McAlindon Barth ’78 (MLA ’09), who oversees media relations for the institute. “People just want to sit in them and stay.” 4. Jaks by Allermuir
Covered in durable purple fabric, this cross-shaped modular seating near the entrance to Rees-Jones Hall interlocks but can be reconfigured according to faculty, staff or student wishes and needs. Jaks does double duty on campus, also appearing in the redecorated lobbies of Erma Lowe Hall. 6. Eames Molded Plastic Chairs
A big hit when mid-century modern masters Charles and Ray Eames introduced it in 1950, this iconic chair received a sustainable makeover when Herman Miller reintroduced the design a half-century later in 100 percent recyclable polypropylene. One reason Aven and McPeak used this chair in both the library and the Schollmaier Arena food court: Purple is a standard color. 8. Brody WorkLounge by Steelcase
“This is probably the most high-tech and innovative chair on campus,” McPeak said. Several years ago, the manufacturer flew her and library administrators to its headquarters in Grand Rapids, Michigan, to introduce them to the high-tech seating during the development stage. The finished chairs arrived on campus in fall 2016, making TCU one of the first college campuses in the country to use them. The chair’s features include LED task lighting, a footstool and an adjustable work surface designed to reduce neck and shoulder strain.