For whom the bells toll

Seven things you may not know about the Robert Carr Chapel carillon. 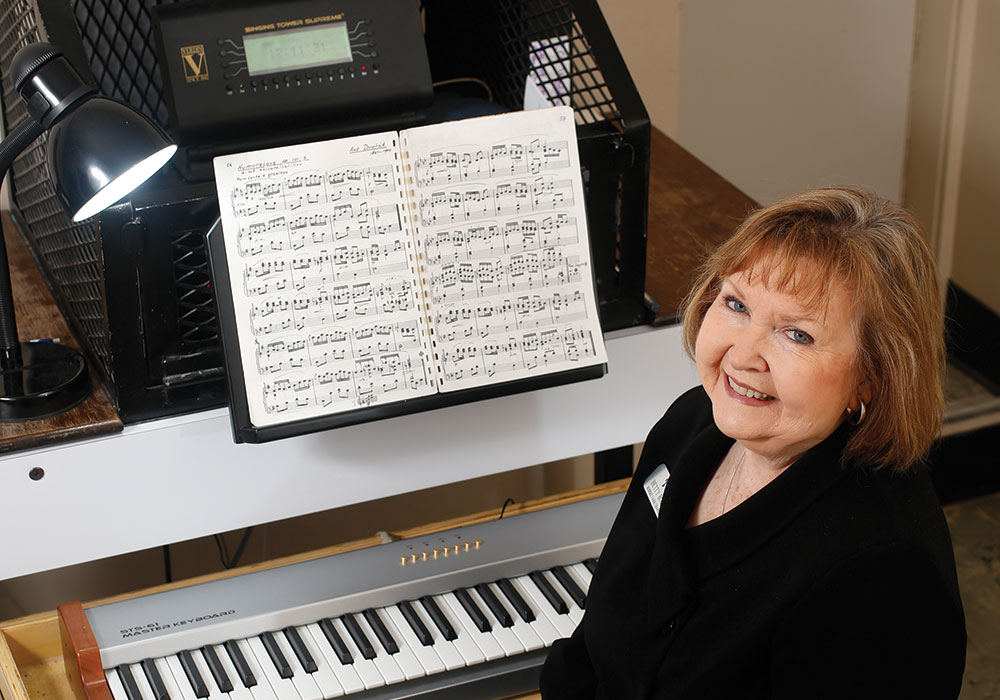 Betty Boles '64 is one of two current chapel organists who play the carillon chimes. (Photography by Carolyn Cruz)

For whom the bells toll

Seven things you may not know about the Robert Carr Chapel carillon.

It rings on the hour, reminding everyone within hearing distance of a timeless tradition.

The carillon of Robert Carr Chapel and its hourly playing of eight measures of the TCU alma mater is the soundtrack of campus life.
But while many know the familiar tone of the campus carillon, there are probably few facts still to unveil.

Don’t look for bronze cup-shaped bells in the chapel’s tower because none are there. The bells are purely electronic.

Known as the “Carillion Americana Bells,” the instrument was manufactured by Schulmerich Carillon Inc. of Pennsylvania. It was designed to produce sounds similar to a cast bell carillon weighing about 280,000 pounds.

The instrument consists of small bronze tone generators, which when struck by metal hammers, produce pure bell sounds barely audible to the human ear. Those sounds are picked up electrostatically, amplified and reproduced from stentors high in the steeple.

Emmet Smith ’54 (DM ’12 Hon), the emeritus Herndon Professor of Music who was the first to play the chapel’s organ and carillonover a 55-year career, says—that contrary to some reports—the bell tower is large enough to have real cast bells, but the chapel’s architect failed to provide a way to install them.

“Every bell tower that has true, honest-to-goodness cast bells has to have a trap door in the bottom,” Smith says. “There are two chambers one on top of the other where the bells could have been hung. But since there was no way to get the bells up there, those huge chambers are just standing there empty.”

“From the street, they look small, you’d think the tower is small,” he says. “But I’ve been up in there, and it’s quite large and would hold probably a carillon of 25 bells. So we have what’s the second best thing, and that is digital recordings of real bells.”

2. The campus is on its third set.

A gift from Robert G. Carr and his wife, the initial carillon debuted Easter Sunday 1960. At that time, newspaper reports called it the largest instrument of its kind west of the Mississippi.

A second carillon was installed in 1984. Smith and his wife traveled to the Cincinnati headquarters of Verdin to select the instrument, a gift from an anonymous donor.

“The second carillon was very successful,” Smith says. “But as all things electronic, they eventually wear out. So now we’re on the third set, which was (installed) in 2010.”

3. Don’t set your watch by the chimes.

The Rev. Angela Kaufman ‘95, minister to the university, said last year the carillon was having some technical difficulties that made it hard to program to ring exactly on the hour.

The bells were ringing about two minutes early, perhaps providing relief to students who scurried to class upon hearing the chimes only to find out they arrived just in time.

“Perhaps it was a divine sign from above to remind students to still try to get to class on time,” Kaufman says.

Smith says he would have to make the occasional adjustment to keep the old carillon on time. “I used to have to change it every three months – it would gain speed,” he adds.

There’s a 12-hour window when the chimes sound—from 8 a.m. to 8 p.m. Kaufman says she heard of one devoted alumnus who drove from Austin one New Year’s Eve specifically to hear the bells ring in the new year.

“He was surprised they didn’t ring at midnight but was happy to be there nonetheless,” she adds.

But 8 a.m. is too early for some. Smith says he remembered in the early years of the carillon, Brite Divinity School students complained the bells woke them up.

Unlike the famous character in Victor Hugo’s novel Hunchback of Notre Dame, who rang the bells, TCU’s carillon is either programed via a computer (the hourly chimes) or by selected carilloneurs (or, a person who plays a carillon).

For weddings and other special occasions, the two chapel organists—Betty Boles ’64 and Marialice Parish—play a variety of songs. While the chapel limits music played during weddings to spiritual or classical music, there is a bit more leeway for the carillon.

Some of the requested wedding songs include those with special meaning to the bride and groom, such as “The Sweetheart of Sigma Chi.”

Typically, the carillon is played just before the wedding, a hymn or song requested by the couple, then after the nuptials, the bells chime in what’s called “free swing peels” for 10 to 15 minutes as the couple and guests depart the chapel.

“It’s really announcing the new couple to the community,” Boles says. “The community really connects to the bells and their message.”

Forget playing fancy chord progressions on the carillon. It is better to play melodies with little or no accompaniment so listeners at ground level can tell what is being played, even if it is melodies from children’s beginning piano books, which Boles has used from time to time.

“You don’t want any heavy chords,” she says. “The notes will compete with each other. It’s better to do simple keyboard pieces.”

Of course there is the pressure of knowing a mistake will ring out for blocks. “You cringe when you make one, but you keep going, you can’t get uptight about it,” Boles says.

7. Carillon harkens back to a proud heritage.

The carillon practice started in the European Low Countries of The Netherlands and Belgium, where villages competed with each other to build the most elaborate towers with the largest number of bells. Traditionally a carillon has to have at least 24 bells. If it has fewer, it’s considered a chime. (TCU has the requisite 24.)

Carillon bells like the ones in Robert Carr Chapel are in some of the world’s landmarks, including Arlington National Cemetery, Bok Singing Tower in Florida, Washington National Cathedral and Pearl Harbor, Hawaii.