Everest may be the highest peak in the world, but K2 is the most dangerous. Located in the Karakoram range on the border between Pakistan and China, K2 is steeper than Everest, the faces are more exposed and the weather more unpredictable. No wonder it’s nicknamed Savage Mountain. 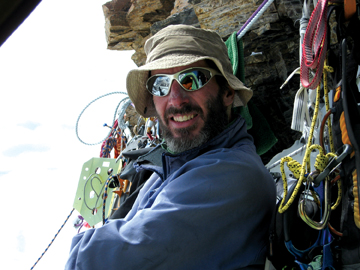 So naturally the adventure-seeking Cook wanted to be one of those few people.

He’d been working his way toward the challenge for years, starting with Denali, the highest peak in North America at 20,000 feet, in 2000.

Cook, part of a 10-man team from America, set out to climb the Cesen Spur of K2, a seldom-climbed route, without the assistance of Sherpas or supplemental oxygen. It was a grueling experience. The weather ranged from 110 degrees inside the tent at base camp to howling blizzards.

The steepness of the climb would have been reasonable for a well-trained climber at a lower altitude but was extremely challenging at the heights they were at. Cook reached 7,000 meters (23,000 feet) three times, but each time was driven back by storms. His group spent 80 days on the mountain, and they were sick and exhausted when they turned back.

Nevertheless, Cook, who lives in Chamonix, France, considers the attempt to climb K2 a peak experience in his life.

Would he try it again?

“You know, with a sponsor and the right team, I might be tempted.”