Burning up the track, Frogs continue the tradition in speed events.

Burning up the track, Frogs continue the tradition in speed events. 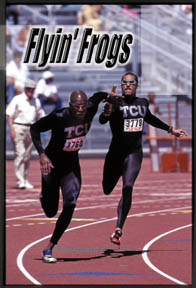 The fastest. TCU juniors Anthony Amantine and Roy Williams, two members of TCU’s 4×200 team, burned up the Texas Relays in April and graced the cover of the June issue of Track & Field News, the most widely read track & field magazine in the world.

Less than a month later, TCU virtually swept the Penn Relays, setting a new collegiate record in the 4×200 (set by the 1986 TCU team) of 19.67 seconds, even beating the meet time posted by the USA National team.

In addition, the Frogs, who boast seven All-Americans, finished fourth in the country for the season, earned national champ rights in the 4×400 relay and won the WAC indoor championship.

“I knew there was a great tradition in the speed events when I came to TCU,” said Coach Monte Stratton at the Penn Relays. “Tradition is a two-sided sword. It’s a monster that had been created long before I arrived and before these guys arrived. Some days you have to feed the monster. Today, we fed the monster.”