With a $650,000 grant, Brite launched Soul Repair Center in November to train clergy to minister to war veterans with “moral injuries.” 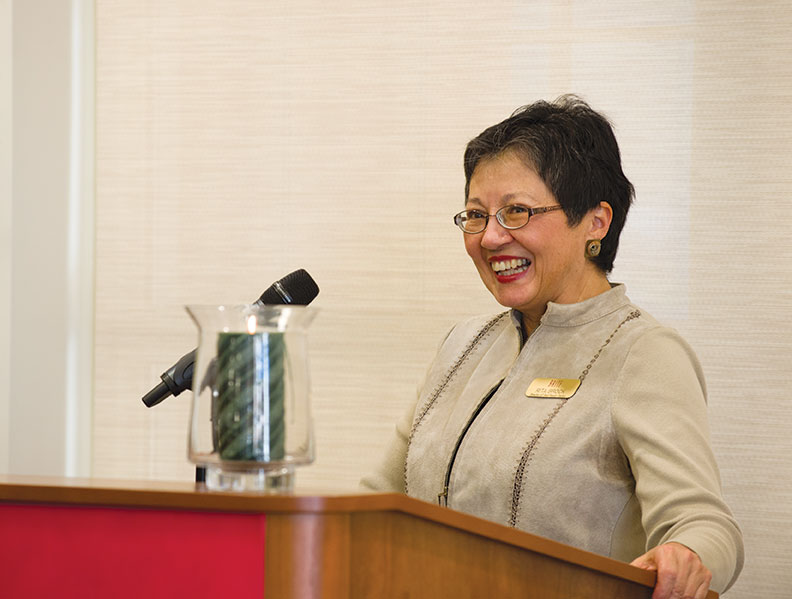 Soul Repair founder Rita Nakashima Brock is a research professor in theology and culture at Brite Divinity School and the daughter of a veteran of the Korean War .

With a $650,000 grant, Brite launched Soul Repair Center in November to train clergy to minister to war veterans with “moral injuries.”

A soldier looks down his gun sight at a child with something in his hand. Is it a rock? Or a hand grenade? Whatever it is, the child starts to throw it into the Humvee ferrying soldiers from the man’s unit.

Pull the trigger? Or wait?

If it’s an explosive, those brothers in arms won’t survive the blast. If it’s a stone, an innocent kid dies, and a family — maybe an entire village — is crushed. And seeds of resentment, distrust and more conflict are sown.

In war, sometimes there are no good choices.

“People come home from war having faced these morally ambiguous decisions in extreme conditions, and they may have done the right thing,” says Rita Nakashima Brock, research professor in theology and culture at Brite Divinity School. “They may have felt all right when they came home about what they had to do to keep themselves and their company alive.

“But then, they have to transition into civilian life, which has a different moral code than the military. They begin to feel uneasy or even guilty about the things they had to do. And even if it was their duty to do those things, it can make a person feel like a worthless human being that no one could possibly love anymore, and it leads to a state of despair or even depression.”

This kind of emotional pain may not be part of post-traumatic stress disorder (PTSD), a small group of doctors are now saying. Instead, feelings of anguish, shame and betrayal are symptoms of what a growing number of medical professionals, military chaplains and civilian ministers are calling “moral injuries.” Left unaddressed, the guilt that often haunts soldiers after combat can burden them for a lifetime or, in its severest form, destroy the will to live, leaving families — even communities — devastated and uncertain how to cope.

It’s a growing issue, too. In January, the U.S. Department of Veterans Affairs released a study of suicides among military veterans from 1999 to 2010 that reported an average of 22 former soldiers per day had killed themselves. More than 69 percent were aged 50 and older.

Now, soldiers are returning home from Afghanistan by the thousands. In response, Brock founded the Soul Repair Center, which opened at TCU’s Brite Divinity School the week of Veterans Day in November, to better understand and treat moral injuries. Bolstered by a $650,000 grant from Indianapolis-based Lilly Foundation, the center aims to train clergy how to minister to combat veterans and their loved ones.

“Veteran suicide rates are alarmingly high, and we believe one important factor is the neglect of attention to moral injury,” said Brock, who serves as the center’s co-director. “Moral injury is the response of healthy people to war, not a psychological disorder.”

According to the VA, more than 200,000 veterans from the Iraq and Afghanistan wars have been treated for post-traumatic stress, but more than 2 million men and women have served in those conflicts, including National Guardsmen and reservists.

Most of them have served multiple tours. But not all of them have faced muddled combat situations, in which the enemy is often indistinguishable from innocent civilians — or can’t be seen at all — and do not have lingering problems from their combat roles.

But for those who do, Soul Repair will attempt to help veterans of any war, since there is a considerable population of Vietnam vets still grappling with their service experiences, said co-director and former U.S. Army chaplain Herman Keizer Jr.

Moral injuries are different in that they are brought about by “perpetrating, failing to prevent or bearing witness to acts that transgress deeply held moral beliefs and expectations,” according to the VA. While an individual can have both PTSD and moral injuries, medical personnel say that the symptoms of moral injuries are often different: depression, insomnia, reliance on alcohol or drugs, or suicidal thoughts.

Medical and counseling treatments are available for PTSD, but there is a growing recognition that moral injuries need to be treated differently, Keizer said.

“The VA can’t do anything for someone who says, ‘I have sinned,’ ” he said. “Religious communities have answers to confessions of sin.”

For Brock, the issue of mental health in veterans is a personal one. A native of Fukuoka, Japan, she is the daughter of a veteran of the Korean War and the stepdaughter of a career U.S. Army soldier who served 29 years from World War II to Vietnam.

Her stepfather supervised a small medical aid station on a combat outpost and retired immediately after returning from Vietnam. He died in 1976 as a middle-aged man — largely, she believes, of a broken heart from what happened there.

He never talked to her about it, so she was left guessing.

“He came back a different human being than the one who left,” she said. “Knowing what I know now, I think he came back with moral injuries.”

Today, Brock is an author and well-known speaker in the Christian Church (Disciples of Christ) based in Oakland, Calif. She plans to commute to Fort Worth multiple times a year.

“Moral injury is not an individual thing you can fix just through one-on-one therapy,” she said. “It really requires a community of support to rebuild a whole new moral identity, to develop long-range plans to build a new life. That seems to me like a mission for religious communities, especially. Where do you find institutions in our society that commit to people from birth to death? That’s religious life for most people.”

That’s what gave her the idea that clergy could be most helpful.

“I don’t know any human being that has an easy time talking about something that hurt their soul deeply. So they’re not going to just volunteer things that they’re feeling. That is certainly something religious communities have a lot of experience in handling rituals of grief.”

Brock believes vets can be restored to a sense of their own goodness. “When they participate in a community where the things they do for other people are deeply appreciated and those things are reflected back at them, they feel loved and appreciated for what they do.”

The other director, Keizer, is a retired colonel in the chaplain’s corps who served in Vietnam in 1969-70. He earned a Purple Heart and stayed in the service through the Army’s “hollow” years in the 1970s.

He participated in the writing of a leadership manual in the late — ’70s and early ’80s to try to return honor, ethics and loyalty to Army leadership.

Not everyone likes the term “moral injury.” Some say it suggests that a service member obeying an order or conducting justified military action is acting “immorally.”

Others claim that life and death decisions are difficult by their very nature, and some soldiers sort out their actions through a filter of their religious upbringing and beliefs.

This March marked the 10-year anniversary of the start of the Iraq War, and Brock acknowledged she opposed the conflict. But her feelings are not relevant when helping vets, she said.

“Our position isn’t to take a moral or political position,” she said. “A moral injury doesn’t come from supporting war or not. It comes from the experience of war.”

Soul Repair will support teams of scholars researching moral injury and maintain a library of treatment resources, as well as develop curricula for theological schools and training programs for communities and churches. The center also intends to create regional conferences for public education on moral injuries.

The center will initially focus on veterans and members of the military, but long-range plans include addressing law enforcement, medical care-givers and prisons.

“The people setting the tone for this conversation will be veterans, not faculty,” Brite president Newell Williams said at the official launch and flag-planting ceremony in TCU Veterans Plaza in November. “Like any good program of repair and recovery, those who have suffered the injury bring the critical perspective.”

The center will follow an ecumenical approach, he said. “We are confident that there are remedies within the Christian faith to address moral injury, but we don’t think that’s the only place. This is not meant to be exclusively Christian.”

Long-range plans also call for a think tank of scientists, clergy, mental-health professionals and combat veterans to drive all of its missions.

“We envision trained clergy all over the country,” Williams said. “In five years, if all we have is a center at TCU, we will have failed our veterans and their families.”

To get help
Veterans struggling with depression, anxiety, sleeplessness, suicidal thoughts or other issues may call the 24-hour Veterans Crisis Line at 800-273-8255 or log on to www.veteranscrisisline.net.