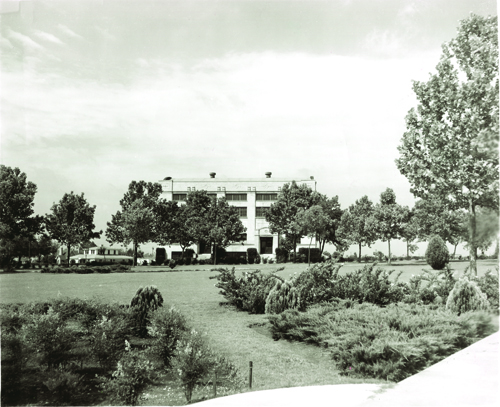 The gymnasium circa 1930. The building is now under renovation.

The art deco concrete structure is older than Amon G. Carter Stadium by almost a decade, and, like the stadium, it closed over the winter for a new look. You know it as the Ballet Building, or if you’ve been a Horned Frog for a long, long while, simply The Gym.

The campus relic, facing University Drive for almost nine decades, was officially renamed in September to Erma Lowe Hall, in honor of the late TCU trustee and philanthropist.

In December, the building closed for major renovation and will reopen in August. Meanwhile, the School for Classical and Contemporary Dance will be housed in various rooms of the University Recreation Center and Cyrus K. and Ann C. Rickel Building through the spring and summer. A temporary dance studio has been constructed on the first floor of the GrandMarc at Westberry Place for the spring semester.

Built during the 1920-21 academic year, Lowe Hall was TCU’s first gymnasium. The 34,000-square-foot building, with its high ceilings and ample natural light, was a campus morale booster and filled three pressing needs: a recreation spot for students, office space for coaches and a home court for the basketball teams.

As the Skiff wrote when construction began in September 1920: “The student body will undoubtedly profit by the presence of the long-looked-for gym.”

The multilevel structure was the original design of Fort Worth architects Van Slyke and Woodruff, who designed the Memorial Arch, Reed Hall, Goode Hall and Jarvis Hall. A high basement contained offices and classroom space. The entrance level housed locker rooms and a swimming pool, which was a student favorite. Above that was a basketball court with a spectator balcony and two small handball courts. The topmost floor contained a weight room.

When a larger, barn-like field house was built in 1926 to the west, the old building became known as “The Little Gym.” Regardless, it was the center of all TCU physical education activities until 1973 when the Rickel was dedicated.

In addition to the physical training curriculum, TCU’s athletic programs were directed from the cramped Little Gym until 1961, when Daniel-Meyer Coliseum was constructed. From a central office on the gym’s main floor, legendary football coach Dutch Meyer created the aerial attack that won TCU two national championships in the 1930s. Later, in another office, hoops coach Buster Brannon drew up the Xs and Os that earned TCU titles in the 1950s. And it was on the second-floor hardwood that TCU basketball teams first competed in the Southwest Conference.

In 1973, all physical education and athletic programs moved to new facilities. Fernando Schaffenburg, the world-renowned director of the dance program, insisted that Chancellor Moudy give the building to the dance program. Moudy agreed and the gym’s pool, basketball court and weight room were transformed into large studios. One handball court became a costume room, the other was used for theatrical equipment storage.

Although the structure wasn’t designed for dance instruction, the program prospered nonetheless. It was the first bachelor of fine arts degree in ballet offered at a major university, and in those studios, Schaffenburg formed a community dance company that later became the Fort Worth Ballet.

The squeak of sneakers is long gone and the grace of the barre will be momentarily relocated, but an even more modern facility is coming.

The central stairs and old swimming pool will be removed. A new elevator tower will be added on the north side and a smaller stair tower will be added on the south side of the building. The three dance studios will remain in place. Studio B will be enlarged to allow comfortable audience seating and an audio/visual booth. Locker rooms, a conditioning classroom, the costume shop and equipment storage will be in the basement level. The first level will have offices, the computer lab, a student lounge and conference room. The second and third levels will have the improved dance studios, audience seating, audio/visual booth and restrooms.