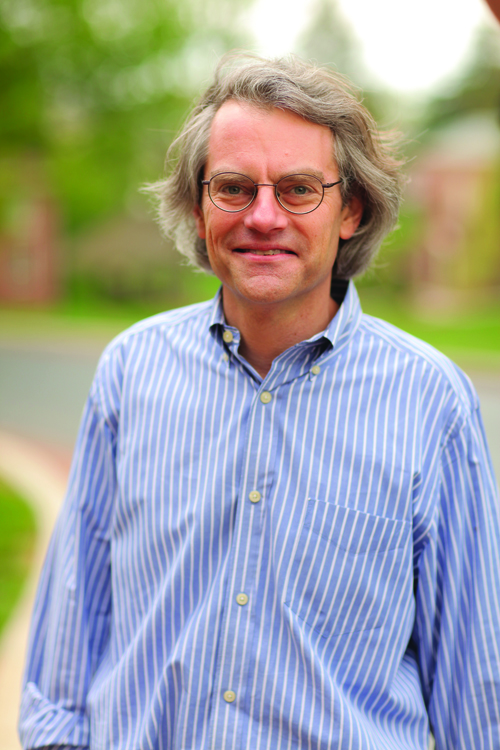 David Schwartz ’85 wrote Consuming Choices: Ethics in a Global Consumer Age about ethics in the marketplace.

David Schwartz ’85, graduated from TCU Phi Beta Kappa and went on to Rice University to earn a master’s degree and doctorate specializing in theoretical and applied ethics. He came back to teach at TCU from 1995-97 and is now professor of philosophy at Randolph College in Virginia. One of his areas of expertise is environmental philosophy and he recently completed the book Consuming Choices: Ethics in a Global Consumer Age (Rowman & Littlefield), an exploration of the ethical choices we make whenever we chose to purchase a product or service.

You argue that many everyday consumer products come to us with manufacturing histories steeped in unethical practices – what are some examples? One that captures many people’s attention quickly is chocolate. Many do not realize that a lot of name brand chocolate is made from cocoa beans harvested by 12-14 year old child slaves. Most of this occurs in the Ivory Coast, which supplies 43 percent of the world’s cocoa beans and is the largest supplier of beans to U.S. chocolate manufacturers.  Some of these children are kidnapped into slavery while others are willingly sold into slavery by their parents due to extreme poverty.

Another important example are “conflict products.” The most well-known of these are so-called “blood diamonds.” Conflict products are problematic because profits from their sale are used to fund violent conflicts and civil wars.  While diamonds are the most publicized instance, there are plenty of others, including a trace natural element called tantalum, which is used in the manufacture of cell phones and other electronic devices.  The mining of tantalum has been linked to the financing of civil war and oppressive governments in Africa.

Are these practices any worse today than in earlier human history? Well, slavery has been around for as long as recorded history, so that is nothing new (though many people believe that it no longer exists, which is simply false). One thing that has changed significantly in this era of globalization is that manufacturing operations are typically located far away from the consumers who buy the end products. When production and consumption are this separated, then it is much harder for these unethical practices to be known about. Further, many manufacturers now “shop” around among countries and locate their manufacturing operations in countries that have laws congenial to their operations.  For example, companies that use manufacturing processes that generate large amounts of pollutants will move their production facilities to countries with lax environmental laws.

How can consumers know if the products they buy were made using unethical practices? This is one of the biggest challenges facing the consumer who wants to buy ethically.  Fortunately, the internet is a tremendous resource. The website corpwatch.org offers a database that consumers can use to research the ethical record of many companies. Another more common sense method is for consumers to look beyond the price of a product in making their purchasing decisions. Using price as one’s sole criterion of what to buy (assuming the products are of equal quality) greatly increases the likelihood that one will be involving oneself in unethical practices, whether it be worker exploitation, environmental harm, or animal suffering.

Do consumers ever have moral obligations to boycott particular products? In the book I argue that consumers do have obligations to boycott certain products, particularly those that involve harm to others, such as slavery.  The case for boycotting other products is not so clear cut, It really depends on the particular practices involved in production. For example, some minor environmental degradation may not warrant a boycott, whereas a table made from an endangered species of rainforest tree would likely warrant a boycott.

Tschetter was a junior player at Shady Oaks Country Club and a member of the TCU women’s golf team when she struck up a unique friendship with golfing legend Ben Hogan. The former LPGA player’s new book shows Hogan to be a caring, often playful mentor, and details what would be his last round of golf.
Available at major booksellers.

A Century of Partnership: TCU and Fort Worth
Edited by Mary L. Volcansek

This TCU Press book celebrates the relationship between town and gown with a foreword by Mayor Mike Moncrief and essays from a variety of Horned Frogs including Vicki Vinson Cantwell ’78, Mike Mullins ’69 and Mark Mourer ’95 (MS ’04).
To purchase: 1.800.826.8911.

Riddlesperger, professor of political science, coauthors this collection of profiles of the powerful politicians who made Texas a major player in the House of Representatives and Senate for 125 years. To purchase: 1.800.826.8911.