Birds in the bush 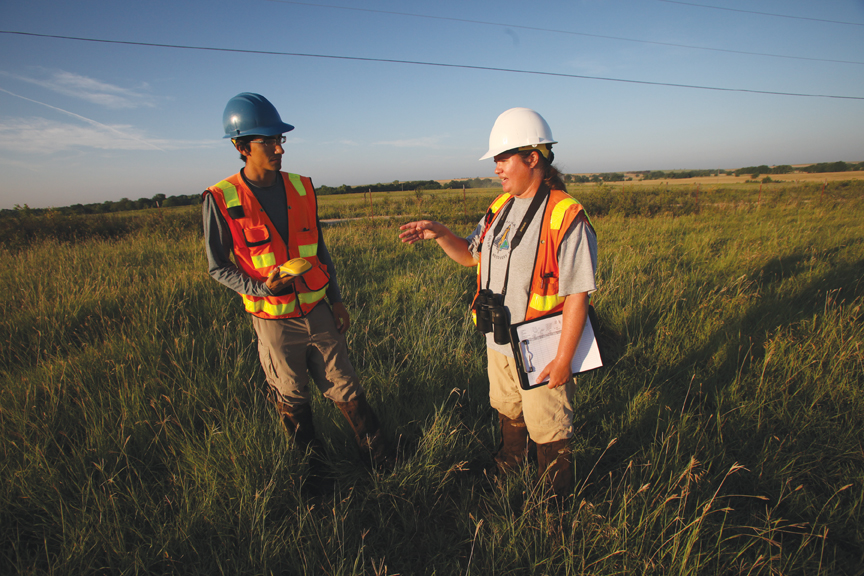 Chris Goates, left, and Erin Hatchett on an early summer morning, monitoring bird populations at the wind farm located near the Texas-Oklahoma border.

Birds in the bush

Wind energy is growing in Texas, but bird species that make their home on the grassy plains are in decline.

A group of TCU environmental science graduate students are examining if wind turbines could represent an additional source of pressure on these declining populations. They spent countless hours in the field, braving 100-degree summer temperatures as well as chiggers, mosquitoes, fire ants, timber rattlesnakes and the occasional copperhead while they monitored bird populations in and around the Wolf Ridge wind farm just south of the Texas-Oklahoma border.

“Because we’re studying birds, we have to be out there by sunrise,” Hatchett says. “The good part is we can be through by 1 or 2 p.m., so most of the time, we miss the worst of the heat.”

To accurately measure the effect the turbines have on bird habitats, including where they build their nests, Meyer and Rubenstahl compared the frequency of bird sightings and nests on the wind farm to comparable areas without wind turbines in the summer of 2009.

Hatchett and Stevens have taken a slightly different approach — they are studying birds at varying distances from wind turbines just at Wolf Ridge.

For his research, Meyer selected three areas of observation:

He set up a scientific method for calculating bird sightings — controlling for the time of day by observing birds from approximately a half hour after sunrise through mid-morning once a week in each location from early May through early August. He also collected data on the habitat characteristics in each location, measuring vegetation height and plant diversity.

The LBJ site drew a more diverse array of birds because it included more forested areas, drawing woodland species such as the Northern Cardinal and Mourning Dove.

The bird communities in Wolf Ridge and the control area were more similar — drawing Eastern Meadowlarks, Scissor-tailed Flycatchers, Dickcissels and Grasshopper Sparrows. Meyer decided to focus on two of the most commons species — Dickcissels and Eastern Meadowlarks, looking to determine if the presence of the massive wind turbines had an effect on the number of birds sighted.

At first glace, they did for Dickcissels. Fewer birds were spotted near the turbines, but the number grew the farther away he went, peaking at 300 to 400 meters from the turbines.

But the height of the grassy vegetation also increased the farther he moved away from the turbines. The land farther away had the taller grass Dickcissels typically desire.

“It would appear Dickcissels are avoiding the turbines, but they also could be going for the taller vegetation,” says Meyer, whose research was supervised by professors Michael Slattery, Dean Williams and Amanda Hale, and postdoctoral associate Kris Karsten ‘00 MS.

Last summer, Hatchett continued the research on Dickcissels, rising each morning from the small clapboard home the TCU Institute for Environmental Studies rented in nearby Saint Jo. She and a couple of TCU undergraduate students spent hours carefully combing through the waist-tall grasses, noting the presence of Dickcissels — yellow-breasted, grassland birds named for their unique call, dick, dick, cissel.

“That guy’s in his usual spot,“ Hatchett says spying a male Dickcissel perched atop a shrubby tree. Male Dickcissels set up territories in April and use their calls to protect their ground from other males. The males then mate with available females who enter their territory.

On that June morning, Hatchett was searching for a specific nest she had located the week before and was eager to see if the young chicks had hatched. Because Dickcissels nest on the ground, they are particularly vulnerable to predators like snakes and fire ants. The nests can also be taken over by Brown-headed Cowbirds, who lay their eggs in the nests of other bird species.

Hattchett finds the nest, but the young chicks are dead.

“Most likely the mother died,” she says. “Maybe a hawk got her and she was unable to return to feed them. The male is of no help because they don’t really help with the nesting.”

She will continue her research this spring and summer and has applied for additional research funds through the Texas Academy of Science. She hopes to purchase probes that could monitor the temperature of nests, an indication of how much time a female bird is spending there.

“The longer the mother bird is away, the more likely the nest could be harmed by predators,” she says.

Rubenstahl was able to use the nest temperature probes in his research on Scissor-tailed Flycatchers. He tracked the fate of 38 nests at the wind farm and a similar control site, finding reproductive success was relatively low at both sites with only 18 percent of nests producing at least one offspring.

But his research also found that nests located closer to the turbines appeared to be more successful than those farther away, suggesting  that the turbines could provide some protection from predators.

In a separate research paper, Hale and Karsten teamed with Pandion Systems to study five species of songbirds — Blue-Gray Gnatcatcher, Painted Bunting, White-eyed Vireo, Lark Sparrow and Northern Cardinal — to see if the turbines affected their nesting. The turbines didn’t seem to impact the nesting success of Northern Cardinals, but results for the other four species were inconclusive because the sample size was so small.

This year, Stevens is continuing the bird research, looking at winter bird populations such as Savannah Sparrows, Sprague’s Pipits, and Le Conte’s Sparrows at Wolf Ridge. Hatchett says it’s important to continue researching how the turbines are impacting birds, particularly species at risk.

“The population of grassland birds has declined due to increasing farming and development,” she says. “They have lost a lot of their native habitat and if we add this to it, and don’t know what the effects are, then it’s irresponsible. We have to build that knowledge base.”

Related stories:
Wind blown: What effects are wind turbines having on the ecosystem?
Powering up: Texas leads the nation in wind-powered generation capacity

On the Web:
Hear the unique call of the Dickcissel