Former secretary of the Navy reflects on his days at TCU and what brought him to Fort Worth.

Former secretary of the Navy reflects on his days at TCU and what brought him to Fort Worth. 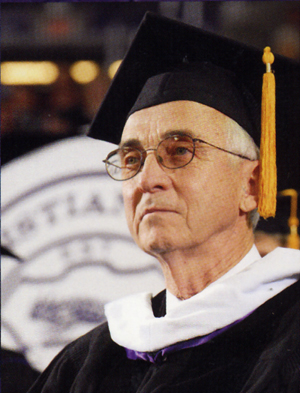 On a cold day in December, Deputy Secretary of Defense Gordon England ’75 MBA told more than 800 TCU graduates the code he lives by: “Never, ever embarrass your mom.” England, who earned a master’s degree in business administration from the Neeley School of Business, came back to campus to deliver the commencement address. Prior to his speech, he reflected back on his days at TCU and what brought him to Fort Worth.

You didn’t attend TCU until well into your professional life. What were you doing before?
I was in Florida, just out of college, working on the Gemini space program. It was all very exciting. We were doing things that no one in the history of the world had ever done. I was very young, going to Mission Control and Houston, and I remember thinking to myself, this is so wonderful and so challenging, it’s too bad it’s happening so early in life, because I’ll never be able to do this again. Eventually, the Apollo program took over my company and I didn’t have a contract, so he decided to come to Fort Worth in 1966. I had never built airplanes.

While in Fort Worth, you decided that you needed a business degree, even though you had a technical degree. Why?
I had moved out of purely engineering into the business of engineering. I knew that to advance I needed to know more about management and mergers and acquisitions. Eventually I got a pretty senior job in the government.

What did you learn in the corporate world that was useful in government?
Government is a large business enterprise, but what’s most important about government is that decision making is entirely different. In government, there a lot of competing interests – that’s the nature of democracies – so to be successful you have to arrive at consensus answers and be willing to accept less than what you deem to be the most desirable outcome, because with all these competing interests, the desired outcome is not one person’s view or two people’s view. You can be influential in pushing your view as far along that vector as you can, but at some point you have to say, OK, that is a satisfactory conclusion for this period of time. You can attack the rest of the problem at another time. Government is about consensus. It is about leadership. But at the end of the day, that leadership, to be successful has to be willing to accept consensus answers and not just your own vision of where you want the institution to go.

What advice do you give students when you speak to them?
Take a finance course. It does not matter what one wants to do in life. Everything, even one’s personal life, has to do with finance. I also tell young people to take the classes that everyone else warns are too challenging. Those are the classes to take because students learn more in those classes.

What’s the greatest challenge facing the United States today?
From a national security point of view: international terrorism in all its dimensions. Another threat that I view as even more fundamental: The U.S. is becoming less competitive in technical areas, especially the hard sciences — a mathematicians, engineers, physicists — that are fundamental to the competitive health of the nation and the security of the nation. I view that as a long-term threat to America.