We ask the questions — Paul Kennedy, the director of TCU’s new Institute of Math, Science and Technology Education — gives us the answers.

We ask the questions — Paul Kennedy, the director of TCU’s new Institute of Math, Science and Technology Education — gives us the answers.

Fresh paint, a metal desk, a blue computer, some seed money and a grand idea. That was the sum of TCU’s Institute of Mathematics, Science and Technology Education when its new director, Paul Kennedy, the William L. and Betty F. Adams Chair of Education, arrived on campus in January. Kennedy, former professor of mathematics at Southwest Texas State and a member of state curriculum committees, has been charged with developing a program that will raise the ruler on math and science education.

Kennedy isn’t daunted by the task. He says he’s going to start by making soup. 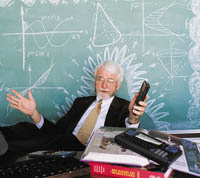 A: I was at the Catholic student center (at Southwest Texas State) with a group to discuss starting a soup kitchen on campus. Some of the professors were worried about the economics, and some were worried about lawsuits or this and that. Finally, Father Bill said, “Well, all those things may be true. But tomorrow morning I’m going to get a big pot and go down and make some soup, and if you all want to come, just come.” So I’m going to write a grant, I’m going to get some teachers into the graduate program, and I’m going to talk to faculty in the schools of science and education about some initiatives to improve education in private and public schools.

A: It was a natural extension of what I was doing. I’ve done a lot of work with teacher training and graduate work with teachers. That’s what they want to get started here. We get to build the Institute from the ground up, and that’s very exciting.

Q: The National Science Foundation reports that 80 percent of all jobs in the future will require proficiency in math and science. How will the Institute address that?

A: The problem we have in training enough people in scientific areas has a lot to do with equity in access for all children in math and science. We’re missing a big pool of kids, closing doors by not providing them access to higher mathematical science. There’s still a mentality out there that thinks if kids don’t know certain basic skills, then they can’t reason mathematically or scientifically, and that’s just not true. My research has shown that there is no correlation between paper-and-pencil, basic-skills arithmetic and whether a child can reason mathematically or algebraically.

A: Far too many kids are being held back for that very sort of thinking. Pages of rote computation drives the zeal for math completely out of their souls. It’s punitive. My children (John, 18, and Catherine, 16) have been using calculators since before they could write. They are good examples because they blow the ceiling out of tests like the SAT. I’ve never focused with them on basic skills; I only focused on perceptual understanding. They are the top mathematical students in their class.

A: No, kids need to understand addition and subtraction, how to divide and multiply, but even most mathematicians dislike computation. That’s where technology comes into play; it is a tool that gives kids access to higher science and mathematical thinking. As soon as the first pocket calculator came out, we should have moved to a basic-skills curriculum that had to do with place value, mental math and computational estimation.

Q: Why is such a change so hard?

A: I think the biggest problem is with attitudes about what kids can and can’t do. If every teacher believed that every kid could learn to think and to develop real mathematical understanding, real analytical skills, then every kid would.

Q: You think the Institute can change that thinking?

A: The Institute can definitely influence change in that direction. Take a teacher who has been to a workshop and heads out energized and excited about teaching, with new tools to use. They go into a faculty lounge at their high school and say, “Look what you can do with a graphing calculator, look at what you can do with your kids.” The idea is to get to those crusty old algebra II teachers, the ones who have been teaching the kids the same way for 25 years because, by golly, that’s the way they learned it. That’s how change happens, teacher by teacher.

Q: Maybe if you changed algebra’s name, people would like it better.

A: Algebra does sound a bit like broccoli, doesn’t it! Some places actually are now calling the courses Math 1, 2 or 3. But really, what matters is having qualified teachers in the classroom and using the technology available to get kids excited about learning.

Q: Is that why one of the Institute’s goals is to get more teachers into math or science education graduate programs?

A: Absolutely. There’s a lack of certified math teachers, and elementary and middle schools are particularly hard hit. Some kids go all the way through the eighth grade without a teacher who has a math specialization. It’s as high as 50 percent in some areas. And those areas tend to be the most socioeconomically depressed. Those kids have a really hard time getting access to math and science because they don’t have people trained to teach them.

Q: What is your first step?

A: I’m writing a grant to do a math project for 30 teachers here that has to do with algebra instruction in high school. Algebra is the gateway to everything. If you have a strong algebra program from sixth grade on, you’re going to open up doors for kids, you’re going to get more kids into AP Calculus, AP physics. Kids value math when they see it connected to their own experience. A vehicle to move kids to the next level of abstraction is to go through something they already understand. So we try to drive kids from what they can do to algebraic reasoning in a way that makes sense to them.

Q: And that’s where technology comes in?

A: Yes. Technology — computers, the Internet, calculators, interactive CD-ROMS — is not only fun and interesting, it takes away the drudgery, gets to the important part, the thinking.

Q: And for the kids, the fun part right?

A: That’s right, not a hint of broccoli.