Five scholars and activists generated possible solutions on how governments and everyday people can assist in the humanitarian crisis. The group offered suggestions during “The Syrian Refugee Crisis Now,” a panel co-sponsored by TCU’s Discovering Global Citizenship initiative and the Bob Schieffer College of Communication.

“We always had hope, it’s only a few months.”
Dr. Amal Alachkar on her family's exile from Syria.

Krys Boyd ’92, host and editor of KERA radio’s Think, told the audience of nearly 200 people that 11 million Syrians – nearly half of the country’s population – are displaced because of the ongoing civil war. “The thought of that kind of upheaval in a country the size of the U.S. would be over 150 million people away from their homes,” she said. “And these are people that our audience here could relate to.”

For Dr. Amal Alachkar, one of the featured panelists, leaving Syria was the only thing she could do. Alachkar established her native country’s first neuroscience laboratory at the University of Aleppo, where she was a professor in the school of pharmacy.

When peaceful student-led protests erupted in 2011, Alachkar assumed the Arab Spring had arrived in Syria. “I stood beside the students, beside the revolution, thinking that it worked in Egypt and Libya and Tunisia,” she said. “It was our moment.”

Syrian President Bashar al-Assad’s forces soon attacked the protestors. Their victims eventually included eight members of Alachkar’s extended family, “including children,” so she decided to wait out the civil war in the United States for the safety of her children.

“I think we have to be more generous, given the dire situation.”
Political science professor Manochehr Dorraj.

The researcher of neurobiology, with assistance from the Institute of International Education’s scholar rescue fund, is now a visiting professor at the University of California, Irvine. Alachkar planned for her family’s exile to be brief. “We always had hope, it’s only a few months.” 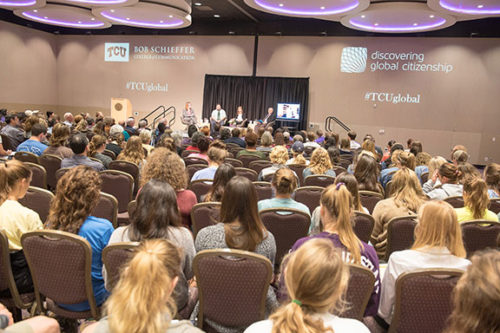 Panelists took questions from the audience.

Alachkar’s expectation was common, said CBS News foreign correspondent Holly Williams via Skype from her base in Istanbul.

The journalist moved to Turkey in 2012 and met some of the now-almost 2 million Syrian refugees there. They, too, assumed the absence would be temporary, Williams said, likely “all wrapped up within a year.”

But most of those refugees have been living in tent camps for four years, and a significant portion of the 600,000 marooned school-age children are receiving no formal education.

To make matters worse, now Russia and the United States are participating in military interventions in Syria, intensifying an already ugly civil war. “There’s no end in sight,” Williams said. “That’s why many are risking their lives to go to Europe.”

“We have to know who we are speaking about.”
Amal Alachkar said of the Syrian refugees.

World news headlines focus on European Union policy discussions and the heartbreaking photo of the dead Syrian toddler Aylan Kurdi, who drowned when a boat capsized in the Mediterranean Sea. But panelists said much of the world is ill informed about the nature of the crisis.

“We have to know who we are speaking about,” Alachkar said of the refugees. She suggested campaigns of awareness as one option for people who want to assist in the humanitarian crisis.

Countries such as Turkey, Lebanon and Jordan are absorbing most of the refugees. “The overwhelming majority of the migrants are going to neighboring countries,” not Europe, said author and global affairs expert Manochehr Dorraj, professor of political science at TCU.

Faced with joblessness, homelessness and hopelessness, desperation abounds for the exiled migrants, especially those without pre-existing financial resources. Williams said roughly 800,000 people risked their lives to get to the European Union last year. They “are overwhelmingly middle class because they’re the people who have the means to borrow their $1,500 or $2,000 to pay the human smuggler.”

The international predicament centers around suffering people, not money or European Union debates, said panelist Tibor Glant, a visiting Fulbright scholar from Hungary who is in residence in TCU’s history and geography department. He said that the 800,000 refugees seeking asylum in Europe, a continent with a population that exceeds 500 million, “shouldn’t be a problem by sheer numbers.”

All of the panelists said everyday people, including those off and on campus, could help with the Syrian crisis. They suggested raising money to donate to employment and education programs in refugee camps as well as insisting that U.S. politicians become more benevolent.

While America has the largest immigrant population in the world (45 million people based on a 2013 United Nations report), the country has only accepted 1,500 Syrian refugees. Secretary of State John Kerry vowed to increase that number to 10,000 in the upcoming fiscal year.

“In terms of size and the economic capability, we are able to absorb many more,” Dorraj said. “I think we have to be more generous, given the dire situation.”

Dorraj said the U.S. is reluctant to help solve the largest humanitarian crisis of the 21st century. “There is a reason, called 9/11, perhaps,” said the professor. “Fear of the Islamic backlash.”

Glant, the Hungarian scholar, agreed: “From an outsider’s perspective, there seems to be some fear mongering … that’s kind of disturbing.”

Alachkar said Americans could help by honoring their nation’s immigrant heritage, which includes Apple founder — and son of a Syrian immigrant — Steve Jobs. “America, as it is now, is shaped by immigrants … all these intelligent people who are shaping this country, a great country.”

While the Syrian scholar appreciates her host country, it is not home. In Syria, “sooner or later the war will end,” she said. “I myself will go back,” even if her former house in Aleppo has been commandeered by al-Assad’s forces.

“Children are the ones we will be relying on to rebuild the country in the future,” Alachkar said. “Without properly educating them, they won’t bring the culture of tolerance and diversity to the new Syria.”