Brandon Manning grew up in a suburb northeast of Atlanta in the shadow of the Confederate Mount Rushmore.

Carved into the north side of Stone Mountain is a nine-story-tall sculpture depicting Robert E. Lee, Jefferson Davis and Stonewall Jackson on horseback. In some ways, this controversial memorial came to punctuate the issues of race and identity that have long lingered in Manning’s mind. Even in high school, he considered questions about depictions of Black men in the media, leadership in the Black community and toxic masculinity. Fast forward to the pandemic and two years in the United States defined by racial strife.

“It is an interesting time as a researcher and a Black man,” he said.

As an assistant professor of Black literature and culture and a core faculty member in the Comparative Race and Ethnic Studies Department, Manning works to expand TCU students’ understanding of contemporary issues surrounding race.

“He is poised to become one of the foremost scholars on Black masculinity in the United States,” said Theresa Gaul, professor and chair of English.

With his first book, scheduled for publication in February 2022, Manning could influence conversations on a national scale.

His work sheds light on how modes of vulnerability in contemporary satire critique stereotypical depictions of Blackness and masculinity. Black artists have long used satire as a vehicle for social commentary, as well as to highlight their experiences.

“A lot of the book is about emotionality and Black men, and ways in which they feel like it was OK for them to share their emotional lives,” Manning said.

In a post-civil rights era, comedy is a canary in the coal mine, Manning explained. “Black men are hyper-visible subjects in the realm of satire, and there’s this vulnerability of being misunderstood given the misdirection of satire.”

Vulnerability is the heart of much of Manning’s work. In 2019, he co-edited a special issue of the journal The Black Scholar subtitled “Black Masculinities and the Matter of Vulnerability.” Brandon Manning wrote Played Out: The Race Man in the 21st Century Satire as an examination of Black masculinity. Courtesy of Brandon Manning

A year later, he penned an editorial for NBC about comedian Dave Chappelle’s Netflix special 8:46. The show’s title refers to the length of time then-Minneapolis police officer Derek Chauvin spent kneeling on George Floyd’s neck before Floyd’s death, which sparked international outrage and prompted many states to reconsider policing policies.

“More than a critique of celebrity culture, though, Chappelle is highlighting how frustrating and tiring it is for Black people to try and make Black deaths legible and accessible for those who don’t want to understand it,” Manning wrote.

“It is an open wound that is never given time to heal.”

In the classroom, Manning has engaged students in conversations about equality, the American dream and more.

Stacie McCormick, associate professor of English and co-director of African American and Africana Studies, has shared a number of students with Manning since he joined TCU in 2018. She believes he equips students with tools for meaningful conversations.

“He has opened up so many things for them in their thinking about race, gender, sexuality and justice,” said McCormick, who describes Manning as a first-rate professor who brings unique insights to the university community.

“When it comes to the work of inclusion and thinking about how we might give support as members of the faculty, he plays a critical role,” McCormick said. “His connection to students is one to admire.”

That connection translates on the page.

“His writing style is very approachable, and it will give student readers a confidence boost in approaching and engaging not only with Manning’s work but that of earlier scholars he builds off of that might otherwise seem intimidating,” said Nicole Solano, executive editor of Rutgers University Press, which is publishing his book.

“A lot of the book is about emotionality and Black men, and ways in which they feel like it was OK for them to share their emotional lives.”
Brandon Manning

In the first chapter of Played Out, which Manning worked on for five years, he examines the language of striving and anti-racist work through the lens of W.E.B. Du Bois. The Harvard-educated sociologist, historian, civil rights activist and author delved into the all-consuming nature of struggling to move forward in society, something known to cause mental fatigue and burnout.

Later in Played Out, Manning discusses the “no-drama Obama” reputation of the 44th U.S. president, who appeared unflappable during his two terms in office.

“Especially during the BP oil crisis, people were getting irate toward Obama for not getting irate enough on behalf of the country,” Manning said. “There was a thirst for a commander in chief who could be a leader as angry as the American people.”

Manning believes that Obama made a concerted effort to remain outwardly composed in part to foil stereotypes about the angry Black man.

Manning looks at undoing assumptions about manhood. Much of the book considers what it takes for Black men to feel comfortable and confident in sharing their emotional lives.

“Black men oftentimes do not do what’s in their best interest because it’s considered unmanly,” said Manning, who cited not wearing a mask in public during the Covid-19 pandemic as one example of such behavior.

Manning’s career also illustrates the way in which English departments have increasingly become epicenters for cultural study. “Narratives about storytelling in all kinds of genres give me a way to think through not only what’s in the present,” he said, “but also what could be or what’s lost or what couldn’t ever be said.” Psychology and the Pill 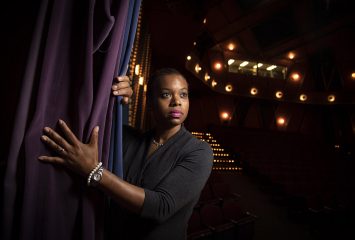