In May, Reid Ryan ’95 moved from running two minor league affiliates to lead the front office of the Houston Astros. 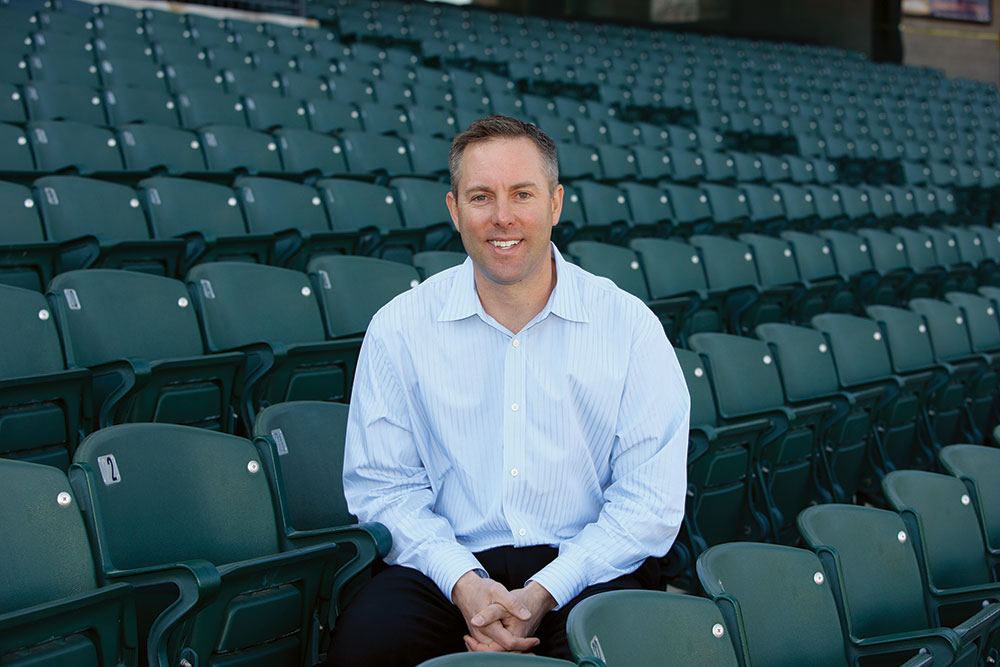 Reid Ryan ’95 finished his first season as the president of the Houston Astros. Ryan moved to Major League Baseball after running the ownership group of the Round Rock Express and Corpus Christi Hooks.

In May, Reid Ryan ’95 moved from running two minor league affiliates to lead the front office of the Houston Astros.

Reid Ryan ’95 has been busy since his big league call up. But the Houston Astros’ first-year president manages to return a call 40 minutes before a July game against the Tampa Bay Rays at Minute Maid Park.

“I’m in my office overlooking center field, getting ready to go down and interact with fans,” Ryan, 41, says.

Shaking hands and bantering about baseball with fans comes easy to the eldest son of pitching legend Nolan Ryan. His approachability served Reid Ryan well as CEO of Ryan-Sanders Baseball, the ownership group behind the Round Rock Express and Corpus Christi Hooks, the Triple-A affiliate of the Texas Rangers and Double-A affiliate of the Astros, respectively. Being hired in May to lead the Astros’ front office has placed Ryan under the bright lights of the majors. But at its core, his new job is the same one he’s been doing for the past 15 years.

“It’s really the same thing, to be honest,” Ryan says. “We’re in the business of giving people a good time.”

Ryan helped pitch the Frogs to a Southwest Conference championship in 1994. That summer, he was drafted by the Rangers in the 17th round of baseball’s amateur draft.

But it soon became clear that his career path, at least on the field, would not mirror that of his no-hitter-hurling dad. A Radio-TV-Film major, Ryan also found that he didn’t want to spend his days in front of the camera.

His idea was to bring pro baseball to the Austin area. Ryan’s first order of business in 1998 was to convince voters in a north Austin suburb to approve a hotel-motel tax to fund a stadium. Ryan, with financial backing from family friend Don Sanders, soon brought a team and fan-friendly stadium to Round Rock. His venture spread south to the Texas coast and his renown as a minor-league exec spread nationwide.

Sanders, the Ryans’ trusted business partner, strongly endorsed Ryan to new Astros owner Jim Crane this spring. Now he’s being entrusted to turn the once proud, but lately downtrodden, ’Stros into a yearly playoff contender — a product reminiscent of what his pop has built in Arlington as team president (and now CEO) of the Rangers.

Winning the American League West division stands as a primary goal for the new prez, although Ryan insists he isn’t fixated on beating his father’s franchise.

“It’s really not a rivalry,” says Ryan, who has three children with wife Nicole Perdue Ryan ’97 and planned to move the family from Georgetown to H-Town in July. “I have so many friends involved with the Rangers. I have nothing but love for the people in this game.”

And Astros fans may soon have nothing but love for Ryan, provided he can help reverse the franchise’s fortunes.