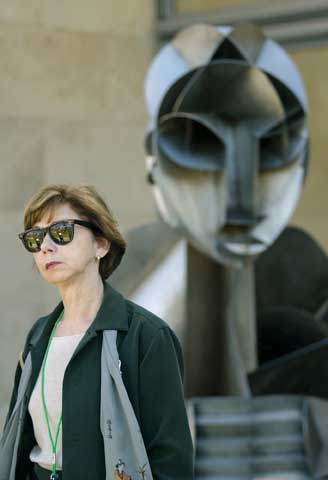 Bemoaning the lack of local arts coverage back in 1988, a handful of artists and creative types tossed around an idea: Why not create a radio format for in-depth coverage of the evolving arts scene in North Texas?

To host, they tapped Sharon Benge ’68 (MFA) who had founded Shakespeare in the Park in Fort Worth, and Quin Mathews, a former WFAA anchor. They dubbed it Art Matters.

Art Matters is now celebrating its 25th anniversary on WRR. In addition to conducting more than 2,400 interviews of local and national artists, the show has reported on major arts events, including the opening of Bass Hall in Fort Worth and the Meyerson Symphony Center in Dallas.

“We try to get to the heart of the creative process, and we try to put that into context of how it relates to our lives,” Benge said. “Our lives are changing so quickly and so remarkably. How do we hang on?”

Using a small, portable recorder, Benge conducts most of her interviews at the artists’ studios, museums or concert halls. But the early days of the show were recorded at TCU’s KTCU studio, thanks to Larry Lauer, who ran KTCU. Lauer is now TCU’s vice chancellor of government affairs.

Among Benge’s most memorable intervews: Helen Hayes, one of only a dozen people to win an Emmy, Grammy, Oscar and Tony; Chuck Close, a painter and photographer known for massive-scale portraits; and Richard Serra, a sculptor whose work, “Vortex,” dazzles viewers outside the Modern Art Museum of Fort Worth.

Benge, who is now the head of the theater department at Texas Woman’s University, said the arts scene has flourished since the show began. In Fort Worth alone, 18 professional theaters now produce plays.

“There have been so many changes in the arts,” Benge said. “We were there for everything, wearing hard hats on construction sites or going behind the scenes of performances. The show has served as a sort of documentary.”

Get a free copy of Art Matters: Countdown to 25 CD at www.artmattersradio.com/countdown-to-25