What the TCU yearbooks tell us about our first 100 years in Fort Worth. 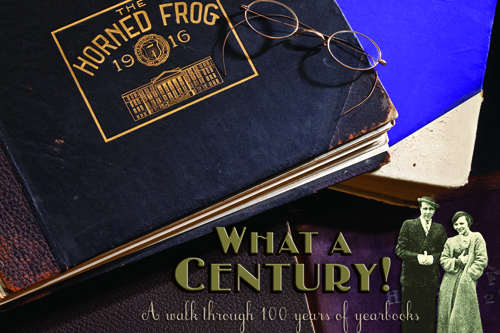 What the TCU yearbooks tell us about our first 100 years in Fort Worth.

It started with just three modest buildings — Jarvis Hall for the girls, Goode Hall for the boys and an administration building for everything else. Lonely and isolated, they stood out starkly on the 50 acres of treeless prairie that was the genesis of the present-day campus. Today, it is graced with scores of structures stretched out over 300 acres.

But back in the autumn of 1911, a promised streetcar line from the City of Fort Worth arrived. The school’s first endowment of $25,000, donated by cattleman L.C. Brite, was in hand. And exactly 414 fresh-eyed students were eager to usher in a new era.

Since then, TCU has survived a Great Depression, two World Wars, oil booms and busts. It has celebrated two football national championships and watched the girls’ skirts go from ankle length to poodle to mini.

Many things have endured (Brite College of the Bible, Mary Couts Burnett Library, Amon G. Carter Stadium), while others have not (a school of law, a medical college, the evening business program). But through it all, the Horned Frogs of Texas Christian University have grown in knowledge, wisdom, spirit and respect.

Here, we bring you the past century through the eyes of the original Horned Frog — our beloved college annual.