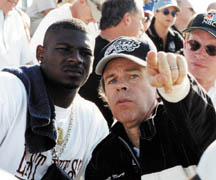 The TCU Heisman campaign for halfback LaDainian “LT” Tomlinson and his Heisman Run might be an indicator of how many yards the star running back will gain this season (remember, he ran for 1,850 last season).

Or it could simply mean that the 2000 season is the year of the Frogs. For the second year in a row, TCU has been named the favorite in the Western Athletic Conference football media poll.

“He’s as hard to catch as his name is to spell. He’s the best-kept secret in college football.” — Ron Franklin, ESPN

“It is nice to know that Heisman Candidate LaDainian Tomlinson can run for 400 yards in a game if he wants to; it’s even nicer to know that he doesn’t have to for the Horned Frogs to win.” — Lindy’s Magazine

“If TCU’s tailback can advance one more rung, he will be mentioned in the same breath as All-Stars, All-Pros and — just maybe — Heisman winners.” — Dave Campbell, Texas Football