The Center for International Studies Photo Contest was created around learning outcomes.

The Center for International Studies Photo Contest was created around learning outcomes.

Because study abroad goes far beyond the tourist experience, students were asked to submit their photos and commentary according to the following categories and questions:

Understanding Country & Culture: In what way(s) do you have a better understanding of the country and culture where you studied abroad? What did you see or do that was unique?

Learning Values: In what way(s) were your values tested, and what did you learn about your host
country’s values?

Learning Values: In what way(s) were your values tested, and what did you learn about your host
country’s values?

Experiencing Local Life: In what way(s) did you try to experience life as a local?

Accomplishment: In what way(s) did you develop a sense of accomplishment, an ability to be self-reliant, and an increase in self-esteem while abroad?

A New Person: How is your life different because of studying abroad?

“This photograph was taken from the top of a pagoda in Bagan, Myanmar (Burma), where you can literally see thousands of giant pagodas built by the Buddhist monks throughout history. By touring the temples of Bagan, I learned that it only takes about a week to become a Buddhist monk in Myanmar, and one can do so as many times as he wants. Also, although monks are only supposed to own an alms pot and their robe, I did meet one with a digital camera.” 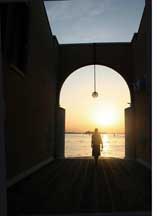 1st Place: A new person.
“Silhouette at Sunset”
By Ericka B. Bailey
Italy

“Our first day in Venice was filled with riding water taxis, strolling crowded maze-like streets of the city, and taking in the unique Venetian culture. As sunset approached, a few of us made our way to the western most point of the city where we watched the sunset. The hustle and bustle of the busy city faded away; the serene Adriatic was glowing before us. This is my favorite memory of Venice.” 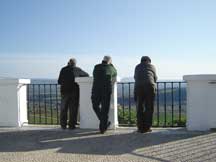 “One weekend, I traveled to a small town called Arcos de la Frontera, one of the famous Pueblos Blancos in the south of Spain, which features narrow streets and whitewashed buildings. One lazy Sunday afternoon I took a walk to the end of town, where I saw one of the most amazing views I had ever seen. The city is situated on the edge of a cliff, and looks over a gorgeous valley. What made this view so special, however, was a gathering of elderly Spanish men – something, it seemed, they did quite often. As they looked over the railing, they discussed the weather, food, their family lives, and so on. I realized that they were not there for the view, but for companionship, entertainment and gossip. I learned that day that no matter where you are or where you come from, no matter your environment, everyone needs their friends. ”

“This photograph was taken at Shwedagon pagoda in Myanmar (Burma). By touring the temples of Bagan, I learned that children in Myanmar are typically named after the day of the week on which they are born; however, name changes are quite common. Most Burmese believe that a change in name can give one a new start in life. I also learned there are eight days in a Burmese week; Wednesday counts as two different days. After learning such interesting facts about the Burmese culture, I realized that it was possible for such a different culture to exist on the same planet and that our culture probably seems just as strange, if not stranger, to them as theirs does to us.” 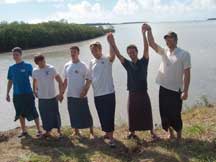 “We faced a culture shock on our trip to Tonga in that most men do not wear pants. They wear tupenus – what we call skirts. It took some of us longer than others to be convinced we should wear them, but we all gave in. Here we are standing at Captain Cook’s landing site in his voyage around the world. He named the country Tonga, because it means ‘The Friendly Island.'”

“Across the Arno River, the Ponte Vecchio, which used to be the meat market, is now home to the gold and diamond dealers. Young lovers would come and attach a lock to the bridge and throw the key in the river as a sign of their undying love. So many, in fact, began to do this that it is now illegal to do so. If caught, there is a steep penalty and fine. Still, locks appear everyday. I guess young love will endure regardless of risk.”

“This photograph captures the Radcliffe Camera in the foreground, which now houses part of the collection of the Bodleian Library at Oxford University. To the right of the Camera, you can just catch a glimpse of All Souls College, and the surroundings of the Hawksmoor Towers, physical representations of the “Ivory Tower” of intellectual pursuit. As someone who will always be a student, I am awed by the immense achievement and great ideas that have been born within the limits of this city. This is one of those places that you place on a pedestal in the fringes of your mind, never quite reaching out for it, but always keenly aware of it. Walking around cobbled streets, with the very walls standing in testament to a long a history of learning, I could not help but feel a sense of accomplishment and confidence.” 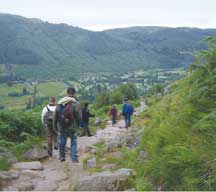 “Traveling from Dublin, Ireland, to near Fort William, I ascended UK’s highest mountain, had my first hostel experience, and spent two 15-hour days of travel by train and ferry, planned just two days prior. At the hostel, I met brothers from northern France. P.J., 21, spoke English very well, and Max, 14, preferred German. In this photo, we had reached and left the summit, the culmination of my weekend plan. The great beauty of the portion of the mountain below the cloud that covered it enhanced my euphoria from the mountain air, physical activity, and sense of accomplishment from climbing a real mountain, something I’d never done before.”

“It seems odd that I would glean a personal value from looking at a large marble building, but I did. The Duomo in Florence – primarily built between 1292 and1436 – was finally completed in 1887, although bronze doors were not added until 1903. This amazing structure took longer to reach completion than it took to find, found and build what we call the U.S.A. The church, the city, and the people held strong to their values of what they wanted from their Duomo – a community, a unity, a legacy. That type of unity and adherence to craftsmanship is almost impossible to find here in the new world. “

“While in Europe, I finally took the time to appreciate my surroundings and the everyday luxuries we all take for granted: a comfortable bed, clean running water, transportation, nature and so much more. I realized that my experience was a once-in-a-lifetime opportunity, and I absorbed as much as possible. I have brought this mentality back home with me, and I find myself taking a step back from my everyday schedule to appreciate all that I have.” 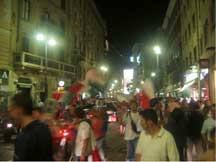 “While I was in Europe, I experienced something I never had before: the World Cup. It was amazing to see countries unite and cheer for the same team, unlike in America where we all have different teams for different states. Football (soccer) is not a very big sport in the U.S., but people love football in Europe. I was lucky enough to be in Italy when they won the World Cup this year. After they won, people crowded the streets of Milan, singing their national anthem and waving their country’s flag. It was country pride like I have never seen before.”

“This picture is New Zealand in a nutshell – adventure, beauty, and awe. Learning what New Zealand values, and finding out why, led us to many unforgettable adventures. They appreciate and value beauty in nature, so we spent as much time as we could hiking, and the benefit was seeing sights like these. This picture was taken at the end of our hike to the top of Mt. Fyffe.” 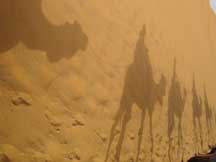 “The Sahara on Camelback”
By Marisa Sleeter
The experience that challenged my views of the world was my trip to Morocco,” wrote Marisa Sleeter when she submitted the above photo to the Study Abroad Photo Contest in August. “I found the economic situation and lifestyle in Morocco was truly a drastic change from anything I had ever seen. We made a trip to the Medina (center) of a city called Fez, where I bargained with a leather salesman for a small chair and saw the workers actually tanning and dying the leather. I even got to ride a camel through the Sahara desert.”