Frogs first gathered in 1904 in Waco to blow a horn or beat a drum.

Frogs first gathered in 1904 in Waco to blow a horn or beat a drum.

When a small group of amateur musicians gathered in Waco in 1904 to “blow a horn,” or “beat a drum,” the TCU band was born. By 1910, one of those early horn players, B.A. Kirkpatrick, was a medical student at the temporary TCU buildings in downtown Fort Worth. He gathered some others to play for the main building’s cornerstone laying on the current campus in 1910. In 1921, the first official band was organized, and by 1925 had 25 members.

The ’30s saw a move to swing and jazz, and the band continued to grow. In the 1950s, under the direction of James “Prof” Jacobsen, the band appeared on national television and gained fame for introducing a new marching technique invented by Jacobsen called the Moving Diamond Drills. Photos from Horned Frog yearbooks. 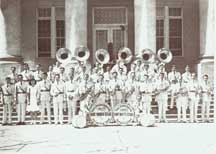 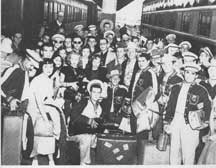 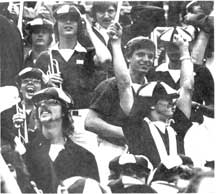 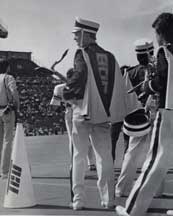 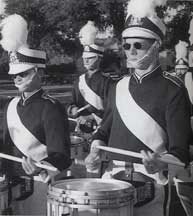 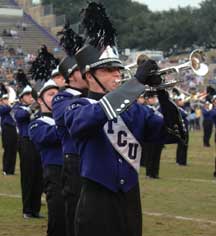 1904  The Beginning — Pep band, and not too good.  Went on for years in that capacity with two or three different directors enlisting any student who knew what a drum or trumpet was.

(C). Dr. Gillis was an outstanding composer/arranger. Arranged all popular tunes of the day ala swing which really put the TCU Band on the map in the 7 years he was its director. He established the 60 piece all-male band which was a tradition until the early 50’s, which was also about the time females began to be included. Gillis went on to even greater heights in New York as one of NBC’s music directors. He was right hand man to the immortal Arturo Toscanini conductor of famous NBC Symphony Orchestra. Also, composed many fine pieces for band.

(D). Amon Carter was a great benefactor of the band. He bought various instruments for the band, and he literally sent the band wherever the football team went. Since this was long before the advent of airline travel, he would charter trains with Pullman cars for the band and football team. For the edification of younger folks Pullman cars consisted of private compartments, each of which had upper and lower bunk beds. Occasionally, as the band boarded the train, Mr. Carter met them with one of his specially designed Western Shady Oaks Stetson hats,and a $20 bill with the promise, “And there’s more where that came from, Boys!  Have a good time!” One such trip was to New York’s Madison Square Garden. The crowd enjoyed the band so much that when the game was over, and the band went out on the court to give a little post-game concert, the entire audience remained and kept them playing for more than an hour.

1944-49  Leon Breeden — Band was made up largely of veterans of WWII who were impossible to control.  One year, arriving back on campus after the Fat Stock Show Parade, the band guys somehow acquired a big white horse. Then they proceeded to ride the horse through the old Ad Building marching behind it and jamming “Onward Christian Soldiers. Another year the football team and band went by train to Kansas City for the Kansas game. As the game started so did a real bad rain storm. Part of the band’s show was to spell out “HELLO.”  The drum major took the band down behind the stadium during the second quarter and changed the show slightly. First, they spelled “O HELL,” then the “O” ran to the other end of the formation spelling “HELLO.”

1950-55 Lew Gillis — Was mascot of band under brother Don. He graduated TCU and next day was Director of Bands. He was a wonderful musician, but had no experience directing a marching band. The band dwindled to 35 in fall of 1954, including 7 majorettes and drum major. Didn’t have enough musicians to have a concert band, spring of 1955.

1955-81 James A. “Jim” Jacobsen — His first year, TCU won conference and went to Cotton Bowl with much less than a good band. The next year was much better. The third year the band was very good and made history by introducing a new marching technique called Peeloffs or Moving Diamond Drills. The original Moving Diamond Drill was done on national TV twice in 1958, including Cotton Bowl. Over the years this technique became widely used nationally. The concert band had begun to do well, also.

2000-current  Bobby Francis —  He is beginning his fourth year as Director of Bands and is doing doing a terrific job.