Walk into the office of two TCU research scientists and you might become a substance abuser. But don’t worry. It’s only a game.

Walk into the office of two TCU research scientists and you might become a substance abuser. But don’t worry. It’s only a game. 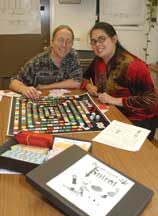 Just try to talk about the consequences of substance abuse with a hard drinker or drug user. Try to explain cause and affect. See if you can even open a discussion about their behavior.

Experts will tell you: it isn’t easy to get through to those addicted. Even harder to help.
Michael Czuchry ’96 (PhD) and Tiffiny Sia ’93 (PhD), research scientists with TCU’s Institute of Behavioral Research, have taken an offbeat tack to do just that: this husband-wife team has developed a board game with psychology Professor Don Dansereau that gets people talking about problems without getting personal.

Aptly titled Downward Spiral, the game, which is funded by a grant from the National Institute on Drug Abuse (Don Dansereau, PI), is a novel approach in the multidimensional treatment process. It is helping users kick the habit in dozens of rehabilitation programs around the country.

Choose a colored disk and roll the dice. You’re now on the road to recovery, or just as likely, the road to ruin. The “winner” is the player who stays alive and loses the least of the allotted life resources such as health, family or friends.

“The games are a fun and hands-on way to get around defenses,” Czuchry explains. “It can make them be more open to the value of treatment.”

Sia adds, “The range of approaches, such as the 12-steps, work best with motivated clients. We try to think of things that are fun and get them to open up.”

Most of the clients are participating in a four-month, court-ordered residential treatment program. Many found their way to the court system because of DWI or drug possession charges, and were given the choice of treatment or jail.

“They don’t really want to be there. They think that they don’t have a problem, that they were just unlucky,” Czuchry says. “The games focus on how to motivate these people. We think of ways to come in the side door to entice them into thinking about substance abuse issues.”

Players start the Downward Spiral game with a Personal Assets Scorecard, including categories such as emotional wellbeing, social support from family and friends, physical health and self-esteem. Each player also starts the game with material assets such as a car and a TV.

Playing on the Monopoly-like board, the clients draw cards that list consequences of drug use. The consequences selected for each card were written by probationers and college students, adding realism to the situations. The longer a player uses drugs, the more family, friends and assets are lost. Eventually, players end the game in a death spiral or by choosing recovery.

“Clients picture themselves in real situations, saying things like, ‘I just got that car! How could I wreck it?’ or seeing the effect of their choices on their kids,” Czuchry says.

The game also works as a non-threatening way to get shy newcomers to talk.

“After playing the game, clients are more willing to share. People who usually don’t speak up in group will share things that have happened in their own life,” Czuchry says.

Sia adds, “It is especially helpful with sensitive topics like HIV. They have a forum to talk about these issues without setting themselves up for being harassed.”

So far, the games have been a successful addition to local treatment facilities and are even being used in hundreds of programs across this country and abroad.

Czuchry and Sia personally train the local counselors to administer the games. The researchers then scientifically measure the success. In targeted facilities, only half of the patients play the game, while all of the patients are measured on their progress.

Overall, clients who played the games see themselves as being more engaged than those who did not play. Players also rate their counselors as being more effective and empathetic. For their part, counselors say the game makes clients easier to work with and spurs more progress.

“The people in the enhanced group (game players) show a boost in how they view treatment early on,” Sia explains. “They get involved earlier and are able to think with more complexity.”

Sia and Czuchry envision the games eventually helping to motivate people in a wide array of settings, from corporate training to treatment of eating disorders.

“If you can understand how to motivate people and how they think, that knowledge can be applied anywhere. We would like to see it applied in business or education.” Czuchry says. “It could be a great prevention tool for any social issue dealing with self-esteem.”