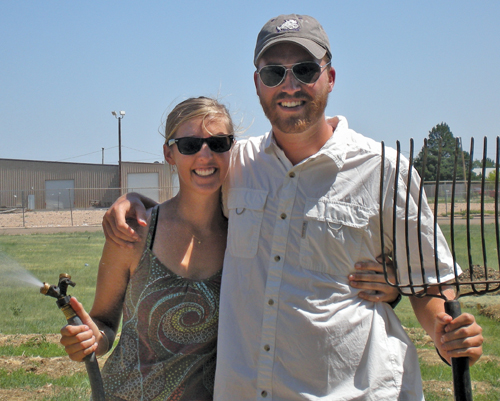 When Morgan Dezendorf ’09 MS and Marc Jansing ’09 went to Amarillo the weekend after they graduated, they expected to get a few calluses. Thanks to TCU mentor and biology professor Tony Burgess, Jansing had applied for a summer gardening internship with the High Plains Food Bank. By summer’s end, the two environmental studies graduates could boast a boatload of organic vegetables, calluses galore and two full-time jobs.

The HPFB feeds between 6,000 and 8,000 families throughout the Panhandle per month by collecting and distributing donated food. But in 2009, it had plans to grow some of its own. The idea was to turn a disused lot into Amarillo’s first downtown community garden.

Dezendorf and Jansing spent June and July transforming the barren lot into fertile ground. Then, on a sweltering day in August, 300 townspeople turned out for the big Day of Caring to build the organic “lasagna beds” that would eventually yield a bounty of tomatoes, melons, squash, beans, cucumbers and herbs.

Then, as the two were making plans to return to Fort Worth, the HPFB hired Jansing to manage the one-acre garden and Dezendorf to develop a nutrition education program to go with it. As education director, Dezendorf speaks in schools and organizations in the area, offers workshops on water conservation, organic gardening, composting and cooking, and updates gardening resources on the HPFB website. She also produces a monthly gardening and nutrition newsletter, maintains contact with the press, and coordinates the garden volunteers.

In 2010, the garden produced over 20,000 pounds of food. In addition to being an outdoor classroom, the HPFB garden is a source of organic produce for the Food Bank’s Kids’ Café, a program that provides supper five times a week to about 800 children per month. Also, they received two federal grants the first year to help fund nutrition education in the Panhandle, as well as build a functioning greenhouse, a 20,000-gallon rainwater catchment system, and a dedicated compost lot.

Jansing is responsible for getting those outdoor projects completed and for conducting plant research, such as the recent study with Texas A&M Extension and the Texas Department of Agriculture to test varieties of veggies that will thrive in the Panhandle’s hot, windy conditions. In March he led a seed-starting workshop in the greenhouse for those who want to learn the first steps to starting their own garden.

“I feel lucky that I’m able to work outside and get my hands dirty on a regular basis while still applying the education I received at TCU,” Jansing says.

U.S. Chamber of Commerce event brings together CEOs of today and tomorrow