This summer, hundreds of incoming freshman will learn Riff Ram, the “TCU Fight Song,” the “Alma Mater” and so much more.

They’ll do all this at Frog Camp. 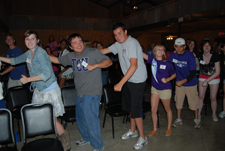 I just returned from my first Frog Camp, Camp Eco held at the Sabine Creek Ranch about 30 miles east of Dallas. I was prepared to learn the rudiments of Froghood, but I didn’t expect the intense activities that encouraged us all to strive to be better people and to make TCU an even better place.

It all started innocently enough with games that helped break the ice and learn each other’s names. Then we broke off into four teams – dubbed Riff, Ram, Bah and Zoo – which provided small group settings to discuss students’ fears and expectations as they entered a new and exciting phase of their lives.

Leading the way were upperclassman camp directors and student facilitators, with some assistance by faculty and staff members. As a staff representative, I was there to provide support and listen, but ultimately get out of the way. It was the students’ time to share and to shine and it didn’t take long for them to do both.

The Eco Camp was the first of its kind offered at TCU, complementing the other three-day Frog Camp offerings that include Casa Nueva, Frog Camp Challenge, Frog Camp Quest, Frog Camp Alpine, and Frog Camp London, also a new addition this year. 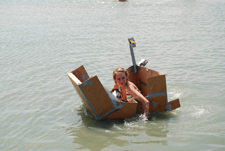 Camp Eco was designed to promote sustainable living and earth-friendly practices such as reusing materials and recycling. The highlight was the Eco Challenge, a competition of eight activities that highlighted teamwork and knowledge of environmentally friendly practices. I’m proud to say my team, Riff, won the prized trophy, an aluminum can fashioned into a Horned Frog by Camp Director Brad Keiser.

The camp also included a cardboard boat race – again Riff ruled! Plus, there was an afternoon of jumping on The Blob, an inflatable trampoline that propelled students into the ranch’s lake – it was a fitting activity that seemed to symbolize their jump into the often-murky waters of college life.

One of the more intense sessions of every Frog Camp is “More than Words,” a dramatic reading written by Carrie Zimmerman, director of the First Year Experience at TCU. The performance intersperses news reports of hate crimes with derogatory slang words used to insult those of different races, religions, sexual orientation and gender. 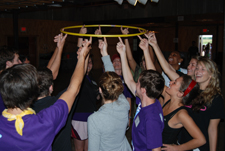 After the powerful presentation, students discussed their experiences with prejudice and the conversation spilled over into struggles with friends and family afflicted by other issues including drugs and alcohol.

While we revealed our own weaknesses, we ended up ultimately feeling stronger and much closer. In a scant 48 hours we had somehow morphed from strangers to close friends.

“Here we really talk about big issues, important things we’re concerned about and not about where to go to eat or what we saw on television last night,” one camper said.

The last day of camp was about giving back to the community – a first introduction to the university’s mission statement – To educate individuals to think and act as ethical leaders and responsible citizens in the global community. 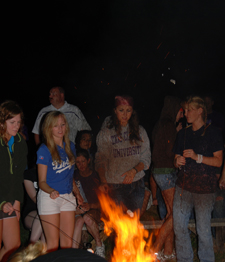 Students helped build a trail at the Fort Worth Zoo and weeded beds and mulched at the Fort Worth Botanic Gardens. It was hot – the official temperature as 93, but it felt more like 100 in sweltering humidity of a June afternoon. Still, the tasks were amazingly fun and fast as we laughed and talked while working away.

In a final exercise, we were given three beads – one purple, one white and one black, to represent the goals we had for the coming year, the coming four years and the coming 10 years. The one-year goals were fairly obvious – most students hoped to make new friends and land atop the dean’s list.

The longer-range goals of some of the students showed their true aspirations – building a solar-powered jet, starting an inner city fine arts school, and helping educate African orphans. Again these students blew me away.

Alexis Branaman, a junior who landed a coveted student facilitator position, said it best at the camp’s closing ceremony.

“We do this because we love TCU and we want to make sure all the things we hold dear are continued on this campus after we leave,” she said. “Now that we’ve gotten to know all of you, we know TCU is in good hands.”