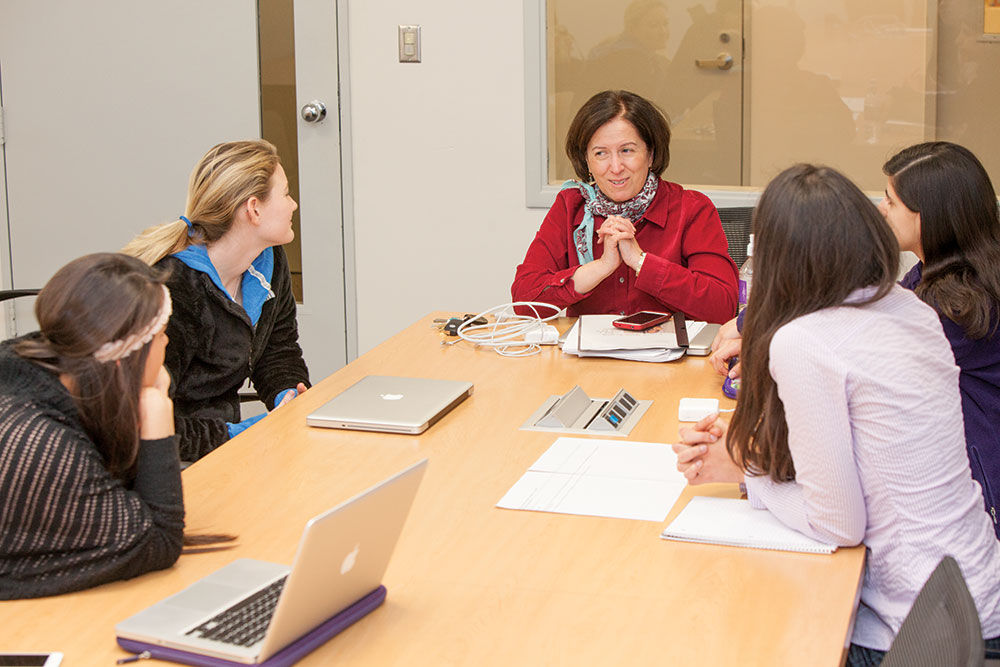 Last July marked a major milestone for the Spanish-language network, Univision. For the first time, it reached a larger audience than its English counterparts with audiences most coveted by advertisers: viewers ages 18 to 49 and 18 to 34.

“Hispanic readership and viewership are growing at a time when traditional media outlets are shrinking,” says Melita Garza, an assistant professor in the School of Journalism and Strategic Communication. “This is a phenomena little understood or observed because most researchers and most journalists unfortunately don’t speak Spanish.”

This semester Garza is teaching a new course, Latinos in the U.S. Media, which examines the history, growth, influence and disruptive force of Latino media in the United States.

The class provides a general survey of Latino print, broadcast and social media, exploring how they have an impact on popular culture, help form personal identity and present marketing opportunities and challenges.

Spanish-language proficiency is required for the course because students will produce their final projects, a profile of a local Latino journalist or marketing professional, in Spanish.

Janette Quezada, a junior journalism major from Fort Worth, says she’s enjoying the class and feels it’s helping her prepare for her dream career – working as a reporter for a Spanish-language broadcast network.

“What we’re learning is so interesting,” Quezada says. “The focus is on my field of study and it’s so rich in history.”

Since 1980, the U.S. Hispanic population has grown from 14.6 million people to nearly 52 million according to the U.S. Census Bureau.

Traditional news outlets are trying to serve this growing demographic group with both Spanish-language and English-language offerings.

In October, ABC News joined with Univision to launch a new cable network called Fusion, an English-language network aimed at young Latinos and other millennial with a mix of news, sports and entertainment.

Garza says Texas has a rich history of Hispanic media. San Antonio is the home to La Prensa, a Spanish-language newspaper published from 1913 and founded by Ignacio E. Lozano. In 1926, Lozano started another successful Spanish-language paper in Los Angeles, La Opinión.

“Those papers were integral in the formation of Mexican-American identity,” Garza says. “Also unknown to most people, La Prensa had a national distribution during the Great Depression. It was the USA Today of its day.”

Garza traces her family’s roots to Monterrey, Mexico, where both sets of grandparents were born. They arrived in the United States during the Mexican Revolution in 1910, settling in San Antonio.

Garza was born on a U.S. Air Force base in Madrid, Spain, where her father, a military officer, was stationed. She grew up mostly in the Washington, D.C. area. A graduate of Harvard University, she completed her MBA at the University of Chicago’s London campus while working abroad as an editor for The McKinsey Quarterly.

After more than 20 years in journalism, Garza earned a doctorate from the University of North Carolina at Chapel Hill. Her dissertation examined the different ways English-language and Spanish-language newspapers in San Antonio covered deportations of Mexican-Americans during the Great Depression.