For better or worse

Since the doors of Robert Carr Chapel opened in 1953, organist Emmet Smith has played the organ for more than 2,600 weddings. Some really stand out in his memory. 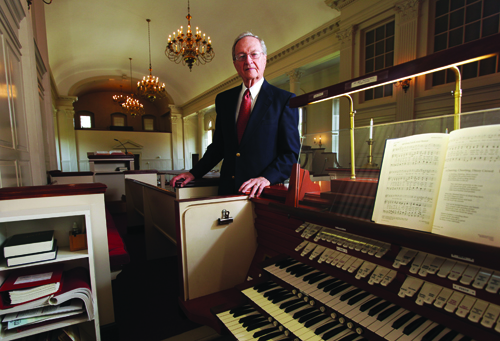 From fainting to flaming bouquets to inebriated inlaws, Emmet Smith ’54 (DM ’12 Hon), emeritus Herndon Professor of Music, has seen it all at Robert Carr Chapel weddings. (Photo by Carolyn Cruz)

For better or worse

Since the doors of Robert Carr Chapel opened in 1953, organist Emmet Smith has played the organ for more than 2,600 weddings. Some really stand out in his memory.

When it comes to weddings, it’s fair to say that Emmet Smith ’54 (DM ’12 Hon), emeritus Herndon Professor of Music, has seen it all.
“I’ve seen individuals become violently ill, and I’ve seen people fall to the floor,” says Smith, who spent more than 45 years as professor of organ and church music at TCU. “Of course I’ve seen a lot of people faint — brides, grooms, mothers and fathers. I think more men have fainted than women.”

While Robert Carr Chapel has provided a picture-perfect setting for hundreds of Horned Frog couples, unexpected catastrophic events linger in Smith’s memory: Like the bride who defied the rules and placed lighted candles in the chapel windows with artificial flowers surrounding them. The bouquet in the front window near the pulpit burst into flame.

“It burned the shutters and blackened the window frame,” Smith says.

There was also the wedding rehearsal where the mother of the bride, a woman Smith described as “a disciple of the bottle,” was in a fair state of inebriation when she saw her ex-husband walking their daughter down the aisle.

“She leapt up and became a human windmill with her arms flailing, hitting him in the nose,” Smith says. “The blood was spurting everywhere.”

The chapel hostess arrived at a compromise; the father could walk the daughter down the aisle, but then had to leave the chapel, missing the vows completely.

And there was the mother of the groom who didn’t like her son’s choice of a bride and tried to derail the ceremony at the last minute, claiming the flower girl needed a better dress. She said would have to go back home to Irving to retrieve it.

“The preacher was not the suavest, most urbane minister I have met,” Smith says. “He came out to the guests and said ‘It’s going to be awhile, why don’t you all go down the street and get a hamburger. Come back in an hour or so and we’ll be ready.’ ”

By the time the 2 p.m. wedding got under way at 5 p.m., the 6 p.m. wedding party had been waiting since 4 p.m. to prepare the chapel for their ceremony and the situation was nearly out of control. The mother came back and it didn’t surprise Smith that the flower girl’s dress was in the chapel dressing room all along; she had just been trying to sabotage her son’s wedding.

“It makes you feel sympathetic toward a young couple who begin married life under such a cloud,” he adds.

He’ll always remember the wedding of Betty Buckley ’68. The Tony Award-winning actress had specifically selected a beautiful piece by Bach for her processional music. On the May afternoon of the wedding, the skies darkened, the clouds turned black, green and purple, and the rain fell in blinding torrents. Guests were unable to leave their cars for nearly 30 minutes so the wedding began after about 50 minutes of pre-nuptial organ music. Just as Smith played the first note of the Bach piece, lightening struck the chapel, the organ fell silent and everyone was in total darkness.

“The electricity was out for 48 hours,” he says. “So she had a real candlelit wedding.”

The ubiquitous unity candle has brought numerous disasters, Smith notes. He remembers the florist who used a butane candle, perhaps to make certain it would ignite at the proper moment. When the bride and groom touched it with their individual candles it went up like a blowtorch with a hissing flame that shot 2 feet in the air.

Another couple thought it would be nice for the mothers to each light the bride and groom side candles, but they did not practice doing it at the rehearsal.

“As I was playing ‘Jesu Joy of Man’s Desiring’ I could see the mother of the groom coming down the aisle shaking with nervousness as she carried the brass lighter with its wick burning. She negotiated the five chancel steps safely, but she was unaware that one more step was between her and the table with the candles. Her right foot hit the carpeted step with a resounding thud and she lost her balance. In an effort to save herself she brought her brass lighter down with a loud crash onto the altar table, breaking off the bell-shaped snuffer and leaving a deep dent in the mahogany top. An usher raced to her side as she lay on the floor and assisted her to her feet and lighted the candle for her. The congregation was whispering sympathetic words as she walked back to her pew.

“As I continued to play, I fervently hoped that the bride’s mother was a witness to that disaster and would be aware of that lethal step. Not so! When she fell, she hurled her brass lighter with such force that it struck the wall, and as she went down she tried to stop her fall by grabbing the edge of the table. It turned her so that she came to rest with both feet splayed out toward the guests. They roared with laughter this time.”

The selection of music for weddings is a delicate subject. Music from Broadway musicals, movies and popular hits are not appropriate in a sacred ceremony, and from the days the doors of Carr Chapel opened, have not been allowed. Smith says it can take a good deal of patience to work with couples who are disappointed that they can’t include a favorite popular song.

“I try to make tactful suggestions so they can have an elegant ceremony that stands the test of time,” he says. “I have had couples come to me, years after their weddings, and say ‘Thank you for guiding us in the right direction.’ ”

Related stories:
Top wedding trends – TCU sociology professor Angela Thompson studies the nuptials industry
For better or worse – Longtime TCU organist Emmet Smith ’54 remembers the weddings no one will forget
Goin’ to the chapel – Robert Carr Chapel has been the preferred venue for TCU weddings for decades
With this Frog, I thee wed – Easy ways to add a touch of TCU to your big day
List of TCU alumni wedding vendors

Interact with us:
Tell us your chapel wedding story at tcumagazine@tcu.edu