First there was football

Addison Clark Jr. helped bring football and the yearbook, which both took the name of some spiney creatures around campus. 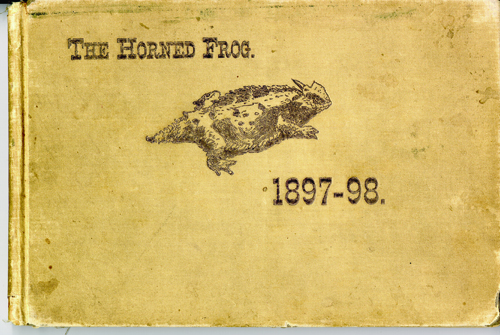 First there was football

Addison Clark Jr. helped bring football and the yearbook, which both took the name of some spiney creatures around campus.

In 1895, two significant events occurred in TCU history: The small co-ed school, then known as Add-Ran Christian University, moved to Waco; and a new professor was hired: Addison Clark Jr., son of co-founder Addison Clark, joined the faculty as a professor of English and history. Addison Jr., who earned bachelor’s and master’s degrees from Add-Ran, had just returned from Michigan University, where he took some graduate courses and, most significantly, was introduced to a new sport rapidly gaining attention at colleges — football.

Addison Jr., though slight of stature, was known to suit up and join the players in rough-and-tumble play on the dusty fields near campus, but he is equally well known for his role as creator and editor of the first yearbook in 1897-98. He named it the Horned Frog after the enduring little creatures that scampered about the playing field in large numbers.

Under his encouragement that same year, the university formed an Athletic Association and fielded the school’s first football team that competed in intercollegiate games outside of the Waco area. A small committee of students followed Addison Jr’s., lead with the annual and chose the horned frog as their mascot.

The yearbook introduced that year wasn’t produced again until 1905, after which it truly became an annual — except for 1910, the year the great fire forced the school to move to Fort Worth.

Another break in publication occurred in 1973, 1974 and 1976, when some felt students would be better served producing a magazine than a yearbook. But that misguided notion was squelched and the Horned Frog was back for good.
Related stories: