A coming-of-age film script about an American student in Italy came to life quite literally for about 20 RTVF students in the summer of 2005. Instructor Chuck LaMendola accompanied the students on a study-abroad semester in Italy, where they shot a 38-minute film, “Il Mio Viaggio a Italia,” (My travels to Italy.) 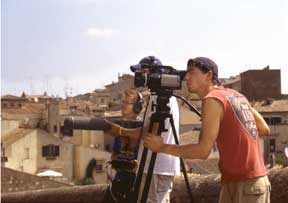 LaMendola, with the help of department chair Richard Allen and instructor Greg Mansur, wrote the outline of the script before the trip. He got the idea for the storyline while walking around campus and noticing how many students were absorbed in cell phone conversations, unaware of what was going on around them.

“Students today are not connected to the world, they’re connected by cell. I thought how different that is from the European perspective of family and community connections,” LaMendola said. “Wouldn’t it be interesting to take a college student and dump him or her into this other world, and at the end of story, he or she would open up and feel a connection to the community?”

Filming took place in Tuscania, a small town northwest of Rome, where David Whillock, associate dean of the college of communications, had established ties to the Florence-based Lorenzo de’Medici School. Virtually untouched by tourist trappings and where little English is spoken, Tuscania was the ideal setting for the script.

Local residents were cast in all roles except the female lead, which was played by then-TCU student Haely White ’05. The rest of the students scouted locations, directed and filmed.

“Efficiency isn’t in the Italian vocabulary; they take their time when they do things,” he said. “It’s more about relationships there, not about work and financial status. We all learned that, and it’s demonstrated in the film.”
At first, the students felt frustrated and inconvenienced, Keith said. But most learned to slow down and roll with the culture – and the locals learned from the students, too.

“I value relationships more, the way families interact as one unit. Many live in the same house where four or five generations have lived. The history in that kind of house took me aback,” Keith said. “At the same time, the Italians were blown away because they never would have been able to make a film in a month.”