Whether students were welcomed for the first time or just welcomed back, they were treated to a heap of fun, free food and Frog spirit in August. It’s just TCU’s way of saying, “Howdy!” 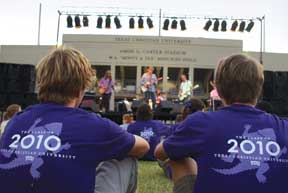 Howdy Week ’06, presented by the Programming Council, is two weeks of activities from the week before the fall semester begins through the first week of classes. It’s a time for students to meet, mingle and reunite. They rolled the dice and won iPods and other prizes on casino night, partied poolside at the Welcome Back Luau at the University Recreation Center and even played a game of truth or consequences.

Campus construction forced another Howdy Week tradition, the pep rally, concert and fireworks show, to relocate to the lawn behind the Dee J. Kelly Alumni Center instead of its usual spot in front of Frog Fountain. (But the crowd gathered to hear Texas country singer Charlie Robison didn’t seem to mind the change of venue.) The construction also required the thousands of students moving into residence halls to navigate around road closures and adhere to special parking regulations.

New to the first-week events was the Chancellor’s Assembly for incoming freshmen, held the night before the first day of classes. Chancellor Victor J. Boschini Jr. provided students with a brief history of TCU and told them what to expect from their experience here: “We study hard, wear purple to cheer on our Horned Frogs on the athletic fields of battle and rub the nose of the Horned Frog statue before tests,” he said. The assembly closed with a candle-lighting ceremony symbolic of the passing of the light of knowledge.

TCU Freshman Class by the Numbers

8,700 applicants (a new record)
1,655 freshmen (biggest class ever)
1,230 from Texas
435 from Fort Worth
262 from Dallas
146 from Houston
130 international students from more than 50 countries
65 from California (the first time a non-Midwestern state contributed the second most students
behind Texas)
40 percent male (the highest
percentage of guys since 2000)
19 percent minority
(tripled since 2000)